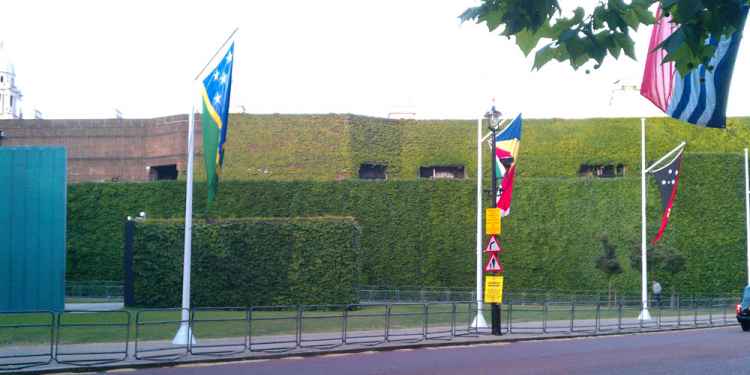 A huge, protected Second World fortress right in the middle of Central London, sat in between Horse Guards Parade and Saint James's Park.

The citadel is still used by the Ministry of Defence, it is now part of the Admiralty Communications Centre.

A "vast monstrosity which weighs upon the Horse Guards Parade", as Winston Churchill once described it. Thousands of Londoners and tourists pass the huge fortress, which sits right opposites Saint James's Park but very few realise exactly what its purpose is.
The truth is, not a huge amount is known publicly about the Admiralty Citadel, it was constructed during the Second World War and completed in 1941.
Shrouded behind a wall of creepers is a War World II, bomb proof operations centre built for The Admiralty. The structure has foundations 9 meters deep and a reinforced concrete roof 6 meters thick.
If the enemy had ever made it in to the country, the citadel would have been a strong hold, complete with gun placements.
The citadel is still used today by the Ministry of Defence, in 1992 it became officially known as the stone frigate HMS St Vincent, operated by the Royal Navy as the Admiralty Communications Centre.
In 1998 a series of mergers meant the end of HMS St Vincent although the citadel's role remains the same, albeit under the control of government sub-contractors under its new name Marcomm Comcen (St Vincent).
I've had contacted from several readers of my website who say they used to work in citadel, one said "I used to work here... Great building. Most of what goes on is below the actual bunker." Another simply said, "I also used to work here, in the 'below' bunker... that's all I'll say."
Tags:
urbexlondon