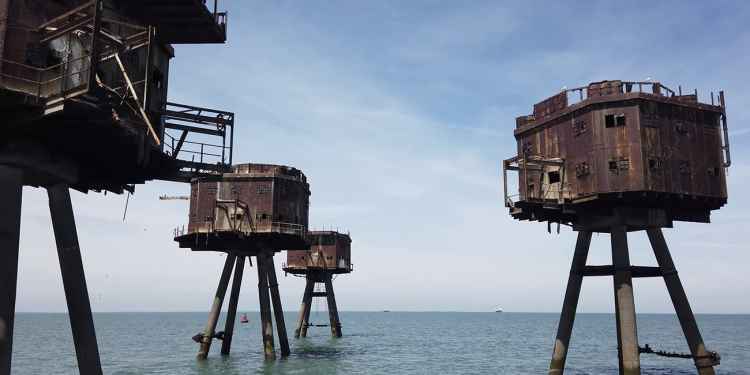 A stunning collection of fortified towers in the Thames estuary, built during the Second World War. The forts were manned until the late 1950s and were then famously used as a pirate radio studio.

There is no public access, but the Red Sands Fort is currently the only fort in the estuary that can be accessed safely from a platform in between the legs of one of the towers.

The Red Sands Forts are one of three sets of army forts situated in the Thames Estuary. It consists of seven towers, which were originally connect by metal walkways.
The sea forts were constructed for the Second World War and named after their designer, Guy Maunsell. Along with Nore and Shivering Sands, their role was as anti-aircraft defence, armed with four main 3.75 inch guns, as well as Bofors 40 mm guns, and searchlight. During WWII the forts shot down 22 aircraft.
There were also four naval forts in the Thames estuary, Rough Sands, Sunk Head, Tongue Sands and Knock John. The forts were decommissioned by the Ministry of Defence in the late 1950s and later used for other activities including pirate radio broadcasting. Red Sands was used by Radio Invicta, also known as KING Radio and Radio 390. The fort was an ideal antenna platforms.
In the summers of 2007 and 2008 Red Sands Radio, a station commemorating the pirate radio stations of the 1960s, broadcast from the Red Sands Forts.
Despite their historic importance, the forts are often under threat. In 1956 there were plans to bring the forts ashore, but it was decided that this would be too expensive. More recently there was talk of demolishing Red Sands. This lead to the formation of a group called Project Red Sands, who aim to preserve the forts.
Add A Comment
Tags:
urbex