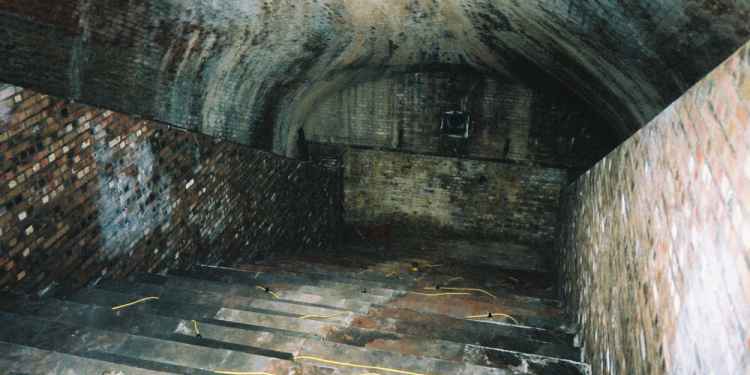 A funicular railway constructed inside the cliffs of the Avon Gorge, it closed before WWII and became a secret transmission base for the BBC.

The site is secure as it is being restored as a tourist attraction - it is open to the public on some days of the year.

A forgotten engineering masterpiece; most of us pass by the Clifton Rocks Railway without even knowing it is there. Constructed with great difficulty inside the cliffs of the Avon Gorge in order to reduce its visual impact on the picturesque surroundings, this funicular railway operated for 40 years against diminishing trade. Its closure before WWII did not mark the end of its useful life as it became a secret transmission base for the BBC. Now a disused shell, with access so difficult that any potential scheme to revitalise it would be so expensive as to be unprofitable, this wonderful relic of a bygone era will probably remain undeveloped.
A voluntary special interest organisation has been set up to restore the Clifton Rocks Railway to it's former glory. The group say 'A major part of Bristol’s Victorian heritage has fallen into disrepair and disorder, remaining hidden from the people of Bristol, the South West and further afield'. The group’s aim is to raise the £10-15 million required for the restoration of the railway. The long term aim is to restore the tunnels four railway lines to working order and restore the BBC studios at the bottom of the tunnel, capturing both historical eras. It is hoped that this will make Clifton Rocks Railway as a sustainable visitor attraction and transport system.
Tags:
undergroundbristolurbex