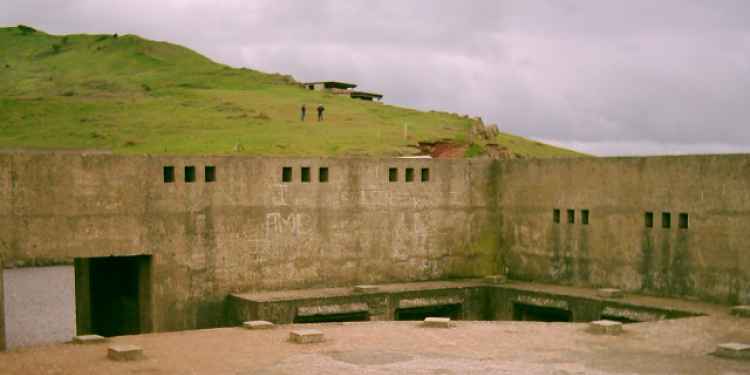 The fort was built between 1864 and 1871 on the recommendations of the 1859 Royal Commission. Originally armed with seven 7" RMLs, it was disarmed in 1901, but rearmed with two 6" ex-naval guns during World War II. Recently restored and opened to the public by the National Trust.

The fort is open to the public and maintained by the National Trust.

Brean Down Fort is situated 60 feet above sea level on the headland 9 miles North-West of Weston-Super-Mare. It was one of four forts built in the 1860s in the Bristol Channel. It was designed to give covering fire across the Severn Estuary towards Steep Holm Island. The fort is approached by a military road along the length of the promontory. Access is by a bridge across the 12 foot deep dry moat.
Work started in 1862 on a 4 acre plot of land at the tip of Brean Down, but took 8 years to complete due to a dispute between the government and the contractors.
Seven 7 inch Rifled Muzzle-Loading Cannons were mounted, each weighed 7 tons and using 30lb of gunpowder charge could fire a 112lb projectile at 1560 feet per second.
In August 1885 the fort was used to test experimental projectiles. The fort was the scene of an explosion on 6th July 1900 when gunner Haines caused an fired his carbine down a ventilation shaft in to one of the magazines. The magazine held 3 tons of powder at the time this blew up destroying two of the gun positions on the west face. The guns were taken away and the forte closed shortly after the explosion.
Between 1905 and 1939 the fort became a cafe but at the start of World War II it was re-armed with two 6 inch naval guns.
Observation posts and two searchlight positions being constructed around the fort.
Brean Down Fort then became a test area for experimental weapons. Rockets and other experimental weapons were tested at the fort. A section of rail can be found in front of the fort, this was used by the Admiralty's Directorate of Miscellaneous Weapons Development from HMS Birnbeck as part of the WWII. weapons development project, these weapons include the Expendable Noisemaker and the ship-launched anti-submarine missile AMUCK.
In the 1980s, the Victorian barracks were renovated and made safe to ensure that visitors can safely walk around the remains of the fort today, further work was carried out in 2000 by The National Trust who began a restoration and consolidation programme which included stabilising the barrack block and officer's quarters.
Tags:
undergroundsomerseturbex