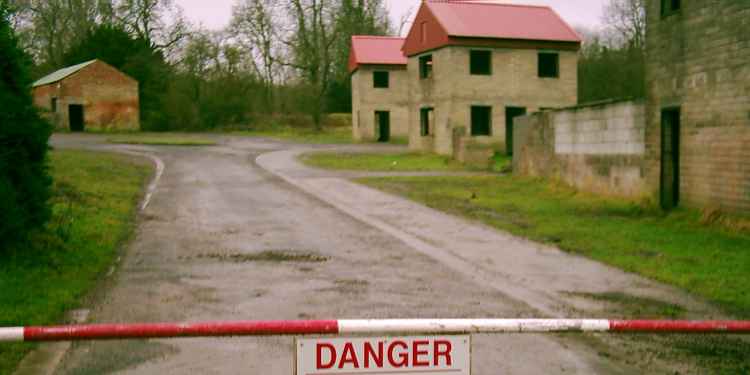 A small farming village requisitioned by the War Department in 1943, the residents were evicted and the village has been hidden from the public on Salisbury Plain ever since.

The village is located in the middle of Salisbury Plain which is a Ministry of Defence area - however, the village is often open to the public when the plain is not in use.

One of the army's best kept secrets, the beauty of Salisbury Plain can be enjoyed with caution and a good map. For half a century the army's vast Imber Range on Salisbury Plain has been closed to the public, and more than 16,000 acres of magnificent countryside lost to walkers and nature lovers. Imber has become a secret place unless you know where to look.
The village of Imber was a small farming village, housing several hundred residents. The village had a church, four farms, a blacksmith, two big houses, about 40 cottages, some newly built council houses and a pub called The Bell Inn.
A lot of the land around Imber had been snapped up by the army because it's remote location made a great training ground but in November 1943 the War Department made a decision which would change Imber forever. On November 1st the people of Imber were summoned to the local school, they were told that their village had been requisitioned under crown prerogative which allowed the War Office to evacuate the area without consultation or compensation. The residents were told they had to make way for the American forces and the village was emptied, by the 17th of December.
The villagers were led to believe that when the war ended they could move back to their homes, but it never happened and Imber stayed in the midst of a huge firing range. Imber is still used by the MOD today as a training ground, all of the buildings in Imber have either been knocked down or gutted for use in training exercises. The only untouched part of the village is St. Giles church which is fenced of with signs stating that it is 'out of bounds' to military personnel, the church is reopened at certain dates of the year for services.
The rest of the village lays derelict home only to the sound of gun shots and empty shells.
Tags:
urbexwiltshire