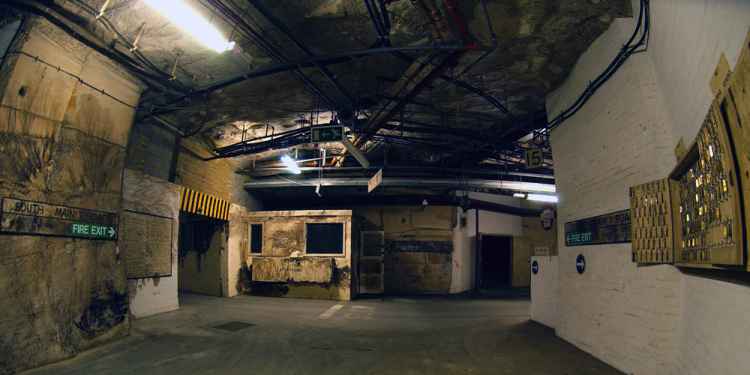 The former emergency relocations site for the government in the event of nuclear attack, the site has been abandoned since the 1980s since which time it has been kept as a decoy site until its declassification at the end of 2004. Burlington has had many code names since its conception in the early 50s, these include Stockwell, Subterfuge, Turnstile, and more recently Site 3.

This is a Ministry of Defence site.

My Tour Of Burlington Bunker

BBC Inside Out West: Tunnel Visions

The BBC go on the hunt for art 100 feet below Corsham in Wiltshire in a secret underground bunker. Olga Lehmann designed and painted murals for the workers' canteen in Bristol Aircraft Company's underground, wartime factory in Spring Quarry, Corsham using paints from the factory.

ITV West evening news coverage of the 1950s nuclear bunker which the Ministry of Defense has put up for sale.

More On The Burlington Bunker

This book tells the fascinating story of 'Burlington' from its inception in the early 1950s until 2004 when the site was finally declassified. It is a large-format volume and contains approximately 400 colour photographs, maps and plans accompanied by comprehensive captions and an authoritative text. Nick Catford was granted unprecedented access to this highly sensitive site in order to compile the collection of images reproduced in this book.

© Crown Copyright Notice: This page includes images reproduced with the permission of the Controller of Her Majesty’s Stationery Office.
Tags:
undergroundwiltshirecorshamburlington bunkerurbex