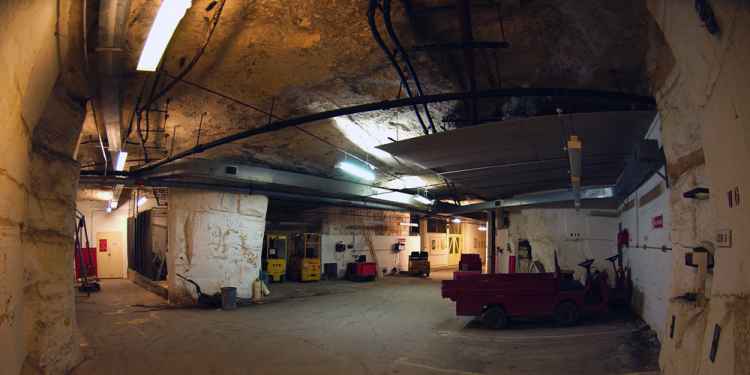 Photo: © Crown Copyright
Although Burlington Bunker was declassified in 2004, very few photos and videos of the infamous nuclear hideout have leaked into the public domain, but for the first time ever, official Ministry of Defence videos of the bunker have been uploaded to YouTube.
Unfortunately the video is a few years old and was released by the MOD on VHS video, which means it's not the best quality. It's also presented in an unedited form, so you see the MOD videographer take multiple versions of shots, sometimes aided by the maintenance staff who worked in Burlington at the time.
Burlington was an emergency government bunker, constructed in an old stone quarry under Corsham in Wiltshire, and would have been the alternative seat of power in the event of a nuclear strike. The bunker covers an area of about 40 acres and went into operation in 1961. It contained everything that its inhabitants would need to survive underground for a three month period.
The bunker is 1km long and 200m across, at a depth of 100m below ground. It was designed to house 4,000 government ministers and civil servants.

0:00 - The video starts in Tunnel Quarry, which adjoins Spring Quarry, part of Spring was converted into Burlington.
0:57 - This is a relatively new walkway which connects Tunnel and Spring Quarry via the QOC (Quarry Operations Centre). It was probably built after the 1992 decommissioning of Burlington. At this time MOD staff would be able to move between all the areas of the underground complex without the need for specific clearance, this walkway gives the staff the ability to do this.
3:18 - We've now moved along the walkway from Tunnel into Spring Quarry, but we don't get to see much of Spring before heading through a pair of double doors.
4:49 - Now through the double doors, finally we are inside Burlington Bunker.
10:55 - This is Passenger Lift 2 (PL2), a now decommissioned elevator which surfaces in the mound just inside the MOD's perimeter fence on Westwells Road.
11:40 - The stores where most of the bunker's furniture, office equipment, stationary, and kitchen supplies still sit today having never been used or even unwrapped. You can still find everything here, from toilet brushes to teapots, not to mention stacks of government headed notepaper.
13:49 - Pedestrian access from the surface via an escalator, which was requisitioned from a London underground station during WWII when Spring Quarry was being used as an underground aircraft factory as part of the war effort.
20:49 - The workshop area, which for the last few years has been used by the bunker's skeleton team of maintenance staff. It is here that the bunker's fleet of electric buggies are stored and charged.

0:00 - The bunker's primary role was to act as a hub and maintain communications within the UK and the outside world. This huge GPO telephone exchange with wooden telephone switchboards, dating back to the 1950s, would have enabled the government to keep in touch with various parts of the country. Burlington is the only place where this technology still exists.
1:12 - A collection of telephone directories, which were kept up to date until 1989.
4:00 - The old original exchange was replaced with a newer automated exchange in the 1980s, this was maintained by British Telecom engineers until the end of the decade.
6:48 - This is the power plant for the 1980s telephone exchange.
9:28 - The bunker had its own infirmary with five wards, this was the kitchen which could have served patients. The bunker was never used but the maintenance staff have unpacked bits from the store and set up the whole infirmary area how they thought it would look.
11:11 - The hallway outside the infirmary wards, each ward was a small room big enough for one or two patients.
13:23 - The infirmary's sluice room where bed pans and the likes could be emptied.
13:45 - The corridors of power. This was where the government would have relocated to if there had been a nuclear strike on the UK. These dark hallways would have basically become Whitehall.
15:54 - Inside one of the government offices we see a Lamson tube. This was a pneumatic compressed air network of pipes, which served the whole bunker. Documents could be placed in pods and sent around the facility.
16:58 - More general government office space.
18:20 - This gallery overlooked the Prime Minister's map room. The room was never set up so it's hard to tell what it would have looked like or been used for.
21:29 - One of the main passageways through the bunker.
25:06 - The bunker's water treatment area and pump room.
28:44 - Communal wash facilities for the bunker's inhabitants.
30:06 - Burlington's main canteen and serving area.
30:49 - This copper contraption is a very old and very rare 1950s automatic coffee machine.
32:09 - The bunker's huge kitchen area.

0:00 - This is the bunker's giant laundry, at the time it was said to be the biggest in Europe.
3:11 - A lot of the bunker has been effected by mould or rot over the decades, here in the laundry a strange yellow fungus can be seen growing on an ironing table.
5:05 - The communications area where hundreds of unused swivel chairs remain in their wrapping, these were to be used by the teleprinter operatives.
5:56 - Lots of dated communications equipment is left behind in the bunker, including these old teleprinters.
14:13 - This is the Lamson room, it was like the bunker's version of a post office. Pods filled with documents would arrive here via the network of pressurised pipes, staff would then sort them and send them through another tube to their final destination in another part of the bunker.
16:23 - Here you can see the air pumps that would have powered the Lamson tube system.
16:52 - The empty document pods on wooden shelves in the Lamson room.
17:28 - Here you can see the tubes leaving the Lamson room and heading off in different directions throughout the bunker.
19:02 - This area of Burlington would have originally been designated as dormitories. The yellow boxes are wardrobes for staff to keep their personal belongings in.
20:56 - This is the Prime Minister's dormitory, one of the only rooms to be whitewashed.
21:40 - The PM's bunker was slightly more luxurious than others, it had its own private bathroom.
27:43 - These two tanks would have held fuel for the bunker's diesel generators.
28:37 - The two huge generators could generate enough back up power to keep the bunker running.

This video is shot inside the bunker's massive ventilation system. As well as seeing one of the air intake fans, there's also a huge butterfly valve. This could have been spun around to block the airway to stop fallout and contaminated air coming into the bunker.

My Visit To Burlington Bunker

© Crown Copyright Notice: This page includes images reproduced with the permission of the Controller of Her Majesty’s Stationery Office.
Tags:
undergroundcorshamwiltshireburlington bunkerurbex