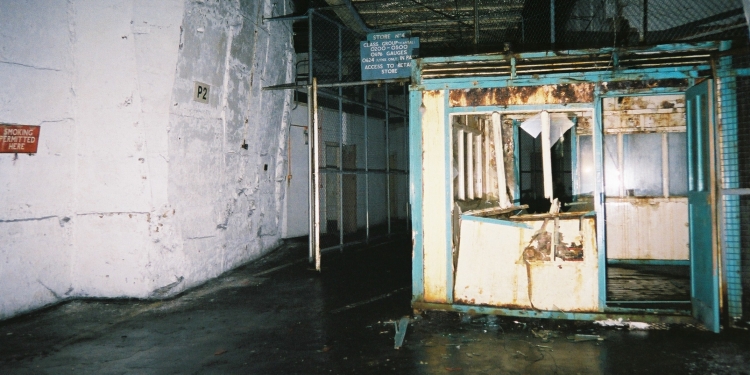 A group of YouTube urban explorers recently posted a video making the bold claim that they had infiltrated the infamous Burlington Bunker in Corsham.
The first video in the series was posted a week ago and showed the team from the channel 'Exploring with Fighters' descending down a flight of stairs taking them 100 feet underground in to a huge underground bunker.
The YouTubers accessed the facility via a hardened slope shaft entrance next to the busy A4 in Corsham, Wiltshire. The entrance now sits within a Redcliffe Homes building site and will eventually be surrounded by a new housing estate.
In the video the guys explain that they are in Spring Quarry, an extensive former underground World War II aircraft factory. After the war part of the factory was converted into Burlington Bunker, a top secret nuclear bunker, which would have housed up to 4,000 government officials in the event of a nuclear attack in the height of the Cold War.
However, 'Exploring with Fighters' are lost. In part of the video they show a map and circle in red the area where they think they have entered the bunker. Not only is the point they've marked nothing more than an air duct with no access to the surface, it's not even the bunker they're in. 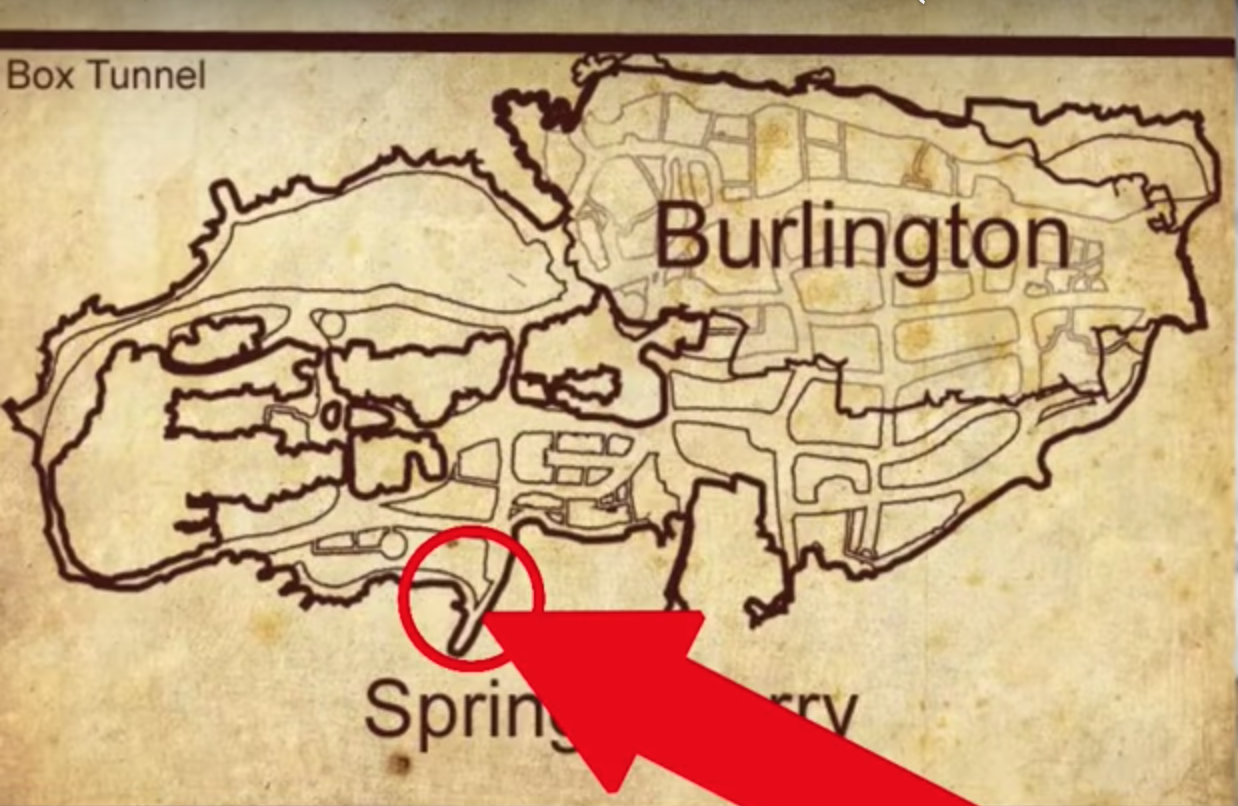 You've got to commend the explorers for their efforts, but they are a little confused about where they are. The bunker they have infiltrated isn't Burlington Bunker at all, or even Spring Quarry. It's actually a site known as Copenacre Quarry, which is a little under a mile away.
Like most of the former Ministry of Defence quarries in the area, the quarry the exploration team had stumbled upon is just as interesting as Burlington. Copenacre is a reasonably large former stone quarry, which was taken over and converted into underground test facilities and storage for electronic equipment by the Royal Navy in 1942.
As well as the surface entrances that the YouTubers stumbled across, there is also another way into Copenacre Quarry and that's via an underground link to the nearby Hartham Park Quarry. The explorers found this link and walked through into Hartham Park, which is an active stone quarry to this day. 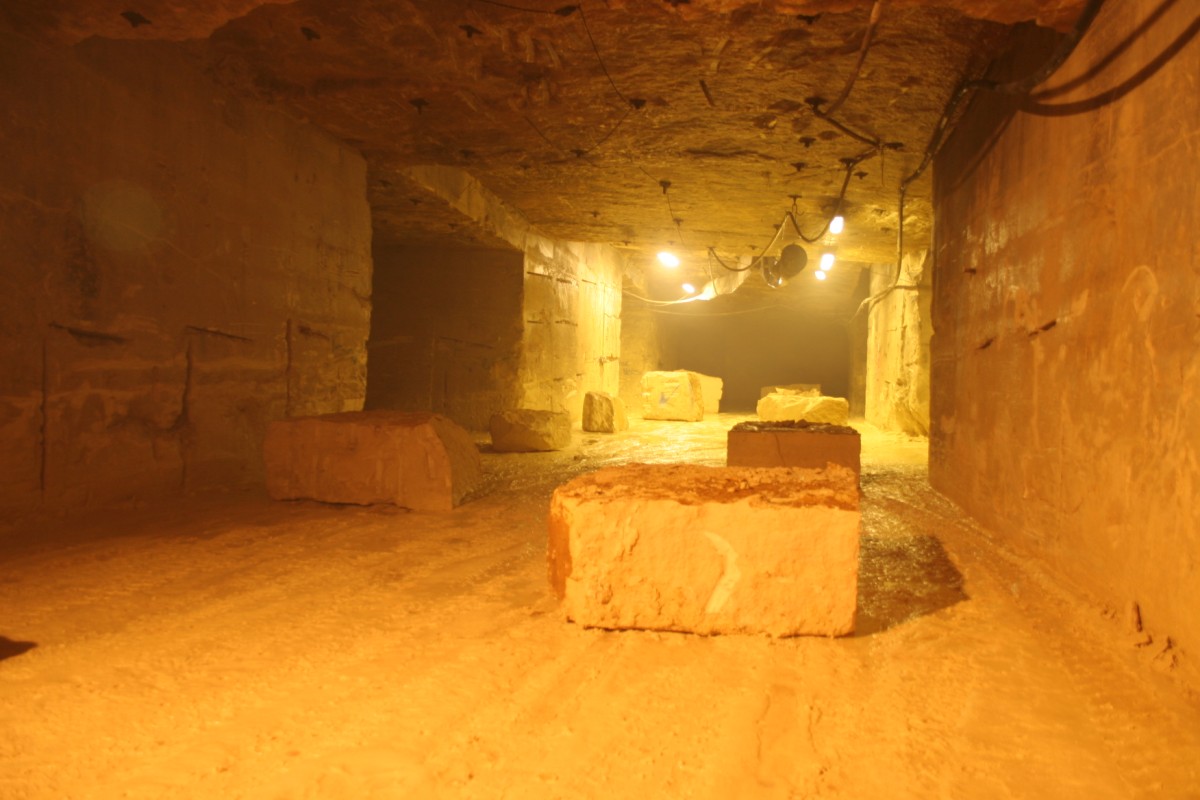 I was lucky enough to visit both Copenacre Quarry and Hartham Park Quarry in 2008, and they are both fascinating places. Copenacre for its wartime history and Hartham Park for its modern-day stone quarrying techniques.
Another place I visited in 2008 was Burlington, the bunker that the 'Exploring with Fighters' team are actually trying to get in to. Towards the end of the video the team claim that their trip to Burlington will feature in the next part of the series. But of course, it doesn't.
The second part of the video was uploaded a week later and shows the team returning to the surface without finding Burlington. Of course this would be the case because there is no connection between Copenacre and Burlington.
Although Burlington was decommissioned in the early 1990s, it is still located underneath an active MOD site. It connects with other parts of the huge underground complex, including Spring and Tunnel Quarry, which are still used by military departments. For this reason all the entrances to Burlington are secured and maintained by the MOD.

Photo: © Crown Copyright
In the second video the paranoid explorers said that the MOD turned up towards the end of their investigation, even referring to them as "men in black." The YouTubers speculated that they may have triggered a sensor underground and alerted the military officials.
Back up on the surface at the end of the video a man in black is seen inspecting the entrance that the team used to enter the bunker, and another man in an orange high visibility jacket is seen walking through the surrounding building site with a torch.
Of course these men aren't MOD representatives, and to be talking about MIBs is frankly a little bit deluded. Like many who are interested in the labyrinth of underground tunnels at Corsham, I've been stopped enough times by the MOD police to know what they look.
The Navy abandoned Copenacre in 1995 and the site was sold off in 1997, and since that time has just been used to store stone from the adjoining Hartham Park which wasn't good enough quality to bring up to the surface, slowly filling up the former Naval stores and making them inaccessible.
As Hartham Park Quarry is also in private hands, whoever it was the YouTubers saw investigating the break in at the quarry would have either been from Redcliffe Homes or the Johnston Quarry Group, who took over ownership of the underground facility in 2017.
It's not clear how the team originally got into the bunker as the door was previously locked and has since been secured with two new padlocks, presumably by either Redcliffe or Johnston, who would be liable should someone be injured while trespassing in the quarry.
Although the explorers failed to get anywhere near Burlington in the second video, they've promised that there is more to come and that they'll be heading back to Corsham the following weekend to attempt to gain access to the elaborate underground city.
However, having made this claim publicly online in a video which has already attracted 11k views, security is bound to be heightened in the area, especially after reports of a break in at nearby Monks Park Quarry that same weekend.

Predictably, the third video in the series came and went and the guys didn't get into Burlington. They did make it back to Corsham but were scared out of the area after being pulled over by the police. The officer said they had pulled them over because their car's plates had been cloned. The guys thought differently, they said they'd been targeted by the MOD.
If they had been targeted by the MOD, they wouldn't need an excuse to pull them over, they'd have simply stopped them as they approached MOD property and told them to keep away. As I said, I've been stopped by MOD police in the area, they don't need an excuse.
The only way Exploring with Fighters will get into Burlington is with the MOD's permission so plastering videos of them pushing their luck and trespassing on YouTube isn't going to do them any favours.
Tags:
undergroundyoutubewiltshireburlington bunkerurbex