The Timeline Of Britain's Most Secret Bunker, Burlington

This article is more than ten years old and was last updated in March 2018. 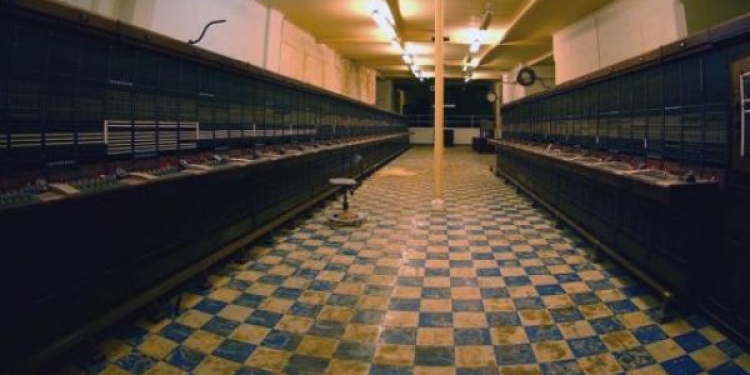 Photo: © Crown Copyright
For decades a huge underground nuclear bunker built beneath Corsham in Wiltshire was one of the UK's best kept secrets. In 2004 it was finally declassified and since the details of its existence have been revealed, below is the timeline of the bunker's construction and use.

The Ministry of Aircraft Production acquires a disused stone mine, Spring Quarry in Corsham from the Bath and Portland Stone Company which had been worked for building stone for the last century.

Work started in Spring Quarry to convert the stone mine in to the world’s largest underground factory.

The work had not finished on the site and by this stage the threat from German bombing had decreased.

Bristol Aerospace Company moved in to the quarry however areas designated for BSA’s gun barrel factory and the Dowty Engineering section were never occupied. The conversion of the Dowty section was never completed.

After the Second World War had finish the companies moved out and the factory closed with a bill of over £20,000,000 after having very little use.

1946 - Ministry Of Supplies Take Over

Spring Quarry was passed over to the Ministry of Supplies who used the site for Admiralty stores.

Plans for a reserve Emergency Government War Headquarters started to form, codenamed SUBTERFUGE which was to be established outside of London on the West Country.

Plans for the layout and conversion of the existing factory within Spring Quarry were drawn up.

The government finally purchased the freehold for Spring Quarry from he Bath and Portland Stone Company along with a large area of surface land.

The government decided to abandon Paddock, the existing emergency facilities in London and develop SUBTERFUGE as the main Emergency Government War Headquarters.

The conversion was coming along well, by this time a wide roadway ran through the site with lifts and escalators at either end. Off of the Northern side of the road was the telephone exchange, workshops, air conditioning, catering and domestic facilities. To the south of the roadway were the departmental offices and living areas. In the central eastern area were the Cabinet and executive function areas.

By the beginning of the year all the surface building work was also completed, three huge blast doors were installed underground sealing the emergency exits from the Admiralty stores. Emergency generators had been installed and some of the domestic equipment such as the bakery ovens had been installed but still the bunker still wasn’t completed to it’s original design and it was now a year behind schedule. The Defence Departments called for the immediate completion of SUBTERFUGE. By the end of the year although not complete, SUBTERFUGE could be used.

1961 - Burlington Goes In To Operation

A stylish bar was installed in the bunker with attractive lighting and polished chrome fittings. The bar stocked a range of beers and spirits. The bar is said to have been modelled on the Whitehall pub the Red Lion and was apparently renamed the Rose and Crown as it was more rural sounding. With the Cuban missile crisis looming BURLINGTON was on stand-by, now with very little work left to complete.

As the role of the site changed, BURLINGTON got a new codename, this time it was labeled TURNSTILE.

The Emergency Government War Headquarters was given an overhaul as part of the expansion of the UK Monitoring and Warning Organisations. A large section of the bunker was separated from the rest and converted in to a Nuclear Reporting cell which employed 600 staff.

A project to improve access and build a new vertical emergency exit shaft was abandoned.

Over the next three years the Emergency Government War Headquarters was reduced in size as part of Thatcher’s government’s new aggressive approach to civil defence, despite a decrease in size facilities were upgraded so that it was correctly equipped for it’s new role as a central government command nucleus. These included a new kitchen and generators.

The Emergency Government War Headquarters was decommissioned and departments started to leave the facilities and supplies were run down.

Now moth balled, the Emergency Government War Headquarters was finally made redundant, however limited maintenance remained at the site presumably even today.

The new PINDAR bunker was commissioned under the Ministry of Defence building in Whitehall just as the last of the Government facilities left Corsham.

The Emergency Government War Headquarters was declassified are for the first time the Ministry of Defence didn’t deny it’s existence, however little detail still has been released about the current state of the bunker.
© Crown Copyright Notice: This page includes images reproduced with the permission of the Controller of Her Majesty’s Stationery Office.
Tags:
undergroundburlington bunkercorshamwiltshireurbex