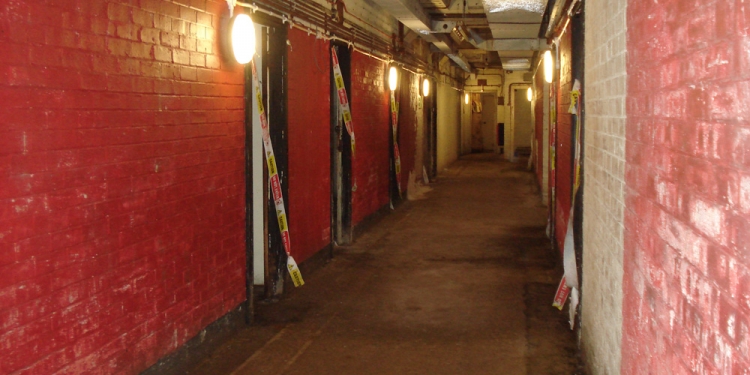 Paddock was Winston Churchill's alternate Cabinet War Room bunker for World War II, constructed in 1939 but only visited once by the Prime Minister before it was abandoned in 1944.

There is no public access to this bunker, however the bunker is open to the public at least two days a year.

Winston Churchill's Cabinet War Rooms under Whitehall are now a popular tourist attraction but in wartime Britain they were the government's hub for the UK's war effort. With fear growing that the Central London bunker might take a direct hit and be put of action an alternative was needed.
Plans were put in place to build a back-up bunker in the London suburb of Dollis Hill in North West London, a part of the city the Germans would be less likely to bomb, construction started in secret in 1939 and lasted 18 months.
Once completed, the bunker could be accessed from a small surface building, once inside stairs took you down through layers of toughened concrete to the bunker's two underground levels.
Each floor could be sealed with huge, air tight blast doors - combined with an air filtration system, this meant that poisonous gasses couldn't penetrate the bunker.
The deepest part of the bunker is 12 meters below the surface and protected by 3 meters of reinforced concrete. The lower level housed the Prime Minister's map room and vital government office was completely safe from the risk of Nazi bombs, which couldn't penetrate that far down in to the bunker.
Paddock had back-up generators capable of powering the underground rooms for days if there was a loss of power from the national grid, however no one ever expected to be there that long hence the lack of sleep accommodation and toilets.
Staff in the bunker had access to the Post Office's canteen and toilets which sat above the bunker but should they ever have had to lock down the bunker due to a gas attack and spend the night, conditions inside would be far from luxurious, with just a small underground kitchen with a serving hatch opening out on to a passageway.
The bunker was staffed and on stand-by through out the Second World War but ultimately saw little action. Churchill preferred to run the country from his Whitehall war rooms and only visited Paddock with the cabinet once for a test run.
Paddock was taken out of operation in 1944, the furnishings were removed, the doors were sealed and the bunker was forgotten about.
In later years the bunker changed hands several times, notably it was owned by the Post Office and Schweepes.
In the late 90s, Brent council allowed the construction of housing on the land above the bunker. During the building works, Paddock suffered some structural damage which has resulted in water ingress. When the bunker was opened in 2000 it was waste deep in water.
Pumps have now been installed in the bunker, and while it is still damp, it is now accessible and has been opened to the public at least two days a year since 2002.
Add A Comment
Tags:
undergroundlondonurbex