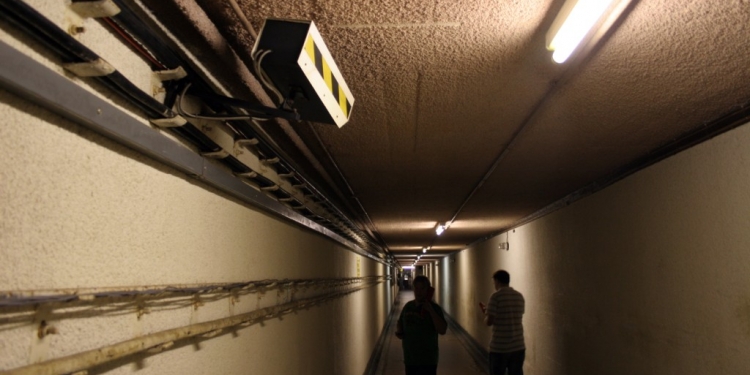 A 1950s Air Ministry bunker spread over three floors, accessible from a small cottage, the bunker is now open to the public as the "Secret Nuclear Bunker" museum.

Not far from Brentwood is Kelvedon Hatch, a huge underground bunker, hidden beneath an innocent looking cottage in the Essex countryside.
The bunker is spread over three floors and is accessible through a 100 meter long access tunnel from an ordinary looking cottage, on closer inspection it's clear the cottage is far from normal, built with thick concrete walls and windows protected by steel shutter. A huge broadcast tower above the hideout marks its location.
Kelvedon Hatch was built in the early 50s by the Air Ministry on land requisitioned from a local farmer. It was put in to operation in 1953 as an RAF ROTOR station, one of many bunkers across the country whose role was to provided complete radar cover for the UK.
In the 60s the bunker's role changed after the ROTOR project was wound down, Kelvedon Hatch became a civil defence and UKWMO (United Kingdom Warning and Monitoring Organisation) post.
By the end of the decade the bunker was given another new lease of life, this time by the Home Office as a Regional Seat of Government (RSG). The RSG bunker was designed to safely house 600 military staff and civil servants in the event of a nuclear attack on the UK.
As the bunker was the largest of its type close to London, it was believed that Kelvedon would be the emergency relocation site for the Prime Minister and cabinet in the event of a nuclear strike. The bunker was even fitted with a radio studio to broadcast to the nation with this contingency in mind. However, it's now known that the cabinet would have been evacuated far from London to a purpose built bunker under Corsham.
Behind 1.5 ton blast doors, the bunker was fitted out with air filtration systems, water tanks and food stocks, enough to keep its inhabitants safe underground for an extended period of time. Air was filtered, recycled and cooled and the bunker was maintained at a positive air pressure to help keep out radioactive dust.
The deepest level of the bunker is 24 meters below ground, this level was believed to be the most protected from attack and therefore housed military communications, vital plant equipment and the plotting room, one of the bunker's most important rooms. This was where the movement of aircraft were tracked 24 hours a day on maps of the country. It's where the analysis and casualty assessment of any potential nuclear explosions was carried.
The middle level of the bunker would have housed representative of every level of Government and Regional Government. Ministers could look down on the plotting room below through an open floor allowing them to keep up to date with the current situation.
The top level would act as home to the bunker's inhabitants, housing dormitories, washrooms and a large canteen. There was also a small surgery.
In 1992, the threat of the Cold War died down, the bunker was decommissioned and was bought back by the family of the original land owner. Now in private hands, the bunker has been restored and is run as the "Secret Nuclear Bunker" museum.
Today the original canteen is still used, offering visitors to the museum hot and cold meals. Beyond the canteen, a huge diamond tipped cutting machine was used to cut through the bunker's thick external wall to make a new exit for tourists.
Tags:
undergroundessexurbex