The Haunted History Of The Jolly Sailor In Looe 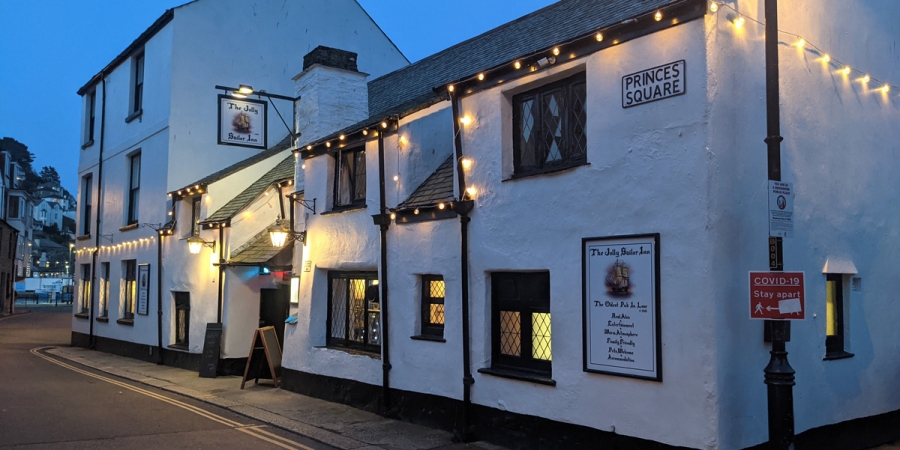 Not only is the Jolly Sailor Inn in West Looe one of the oldest and most haunted pubs in the UK, it's also a favourite haunt of the Higgypop team.
The pub was built in 1516 and originally sat next to a small dock, an offshoot of the river and main harbour, so it's no surprise the Jolly played host to smugglers. Boats were able to moor alongside the building, until the harbour was covered over around 100 years ago.
The Jolly's association with all things nautical can still be seen inside the cozy pub. The low ceiling in the main bar is supported by dark timber beams, the largest of these which runs along the top of the main bar was taken from HMS Indefatigable after it was broken up in 1816. The ship is now depicted on the pub's sign. Other beams in the bar are said to come from a Spanish Armada fleet which was shipwrecked off of Looe Island in 1588.
The haunted reputation of the Jolly is well documented in local ghost books, and the activity is so normal to some regulars that they don't bat an eyelid when something strange happens, like a tankard falls from its hook halfway through the recital of a sea shanty. So much strange activity occurs there that the pub's current owners maintain a regularly update page on the pub's website documenting the many incidents, which even include video evidence.
The activity at the Jolly includes items being thrown, disembodied voices, flickering lights, taps turning themselves on, objects and furniture moving around of their own accord, and even staff and drinkers feeling as if they've been touched by unseen hands. Recently the bar's doors flung open just after closing time, the moment was captured on the pub's CCTV system. You can see the moment for yourself on the Jolly's website.
Guests staying in the B&B rooms upstairs have reported seeing figures, and one guest even reported feeling someone get into bed behind her. Another reported their phone being pushed off the desk while they were sat watching television in the room. Even the landlady has awoken in the night to find standing over her bed an old woman who proceeds to vanish.
There's also been reports of sightings of a blonde curly haired child in the kitchen and the ladies toilets are said to be haunted by a male spirit who according to the staff is said to be a bit of a ladies' man. He's made his presence known to a few of the locals who will now refuse to use the toilet alone.
Probably the most famous supernatural story to be linked to the Jolly Sailor is that of the spirit of a girl from the village who committed suicide after being jilted by the love of her life, a local sailor. Since her death she has been seen in the form of a phantom white hare darting through the countryside surrounding Looe and through the town's streets. It's said that she rushes down to the Jolly in order to warn the drinkers whenever misfortune is headed for Looe.

The White Hare Of Looe