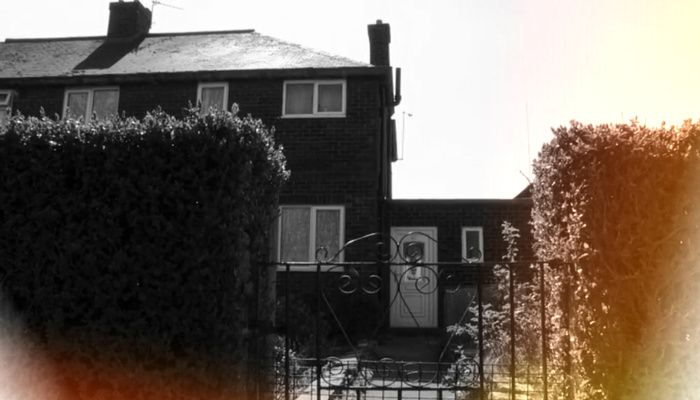 This week Yvette Fielding and the Most Haunted team embark on a two-part investigation of one of the most violently haunted houses in the UK, an ordinary three bedroom house at 30 East Drive in Pontefract, West Yorkshire.
The team have decided to depart from the usual Most Haunted format for these two episodes in order to show us exactly what happened throughout their night in the house. The reason for this decision was because paranormal activity started as soon as the team entered the house.
What makes 30 East Drive such a fascinating location is that it's not like the locations the team usually visit. It's not a big old manor house, a stately home, a pub, or an ancient castle. Number 30 is an average looking house, on an average looking street, and what makes it really terrifying is that it could be your own home. 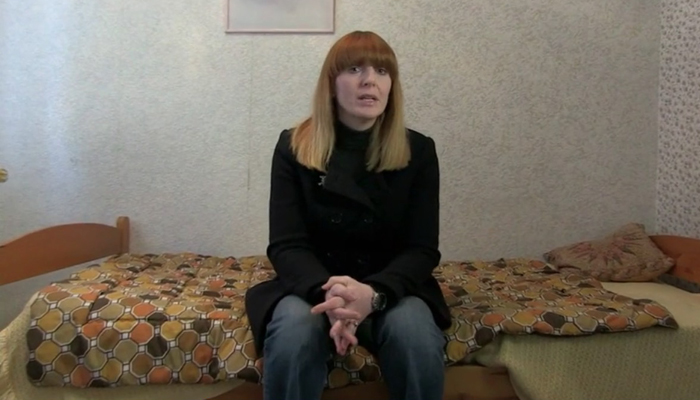 The house is said to be haunted by the Black Monk of Pontefract who was executed on the site long before the house was built. He's sometimes also called Father Michael or simply Fred. The haunting started in 1966 when Jean Pritchard moved in to the house with her husband Joe, 15-year-old son Philip, and 12-year-old daughter Dianne. The strange phenomenon started on a hot summer's day, a fine layer of chalk-like dust appeared from just below the ceiling, and from this moment on the inexplicable paranormal events escalated.
Pools of water mysteriously formed on the kitchen floor, and all attempts to dry it were thwarted. The council visited the house to investigate and even dug up the kitchen floor.
Green foam oozed out of taps after the water was turned off, lights were turned off and on, plants leapt out of their pots and landed on the stairs, cupboards shook violently, doors banged, photographs were slashed by sharp blades, and countless object were witnessed levitating or being thrown.
Some of the reported incidents were much more violent. On onc occasion a large grandfather clock at the top of the stairs was pushed over causing it to tumble down the stairs and smash. But even this is tame compared to the night it dragged Dianne up the stairs. The young girl was standing at the bottom of the stairs when she felt a strange sensation, as her long hair started to stand on its end. Without warning she was suddenly flung to the ground and dragged kicking and screaming up the stairs. After the event the seriously traumatised girl was being comforted and finger marks were clearly visible on her throat.
The family eventually left the house but the hauntings didn't stop, some say they got worse. The next door neighbour, Carol Fieldhouse said, "activity doesn't just happen in this house here, it happens in my house as well, they're both as bad." Speaking about her experiences of the Black Monk in the show, she said "whenever I put the bed head neat the chimney breast, things happened and the first time we never saw this thing happen, it was crawling up the side of the bed. Just this black thing, at first I thought it was a lady with long black hair. And when it stood up it was very tall, very wide and I realised it was a monk. Never saw his face."

Before The Lights Went Out 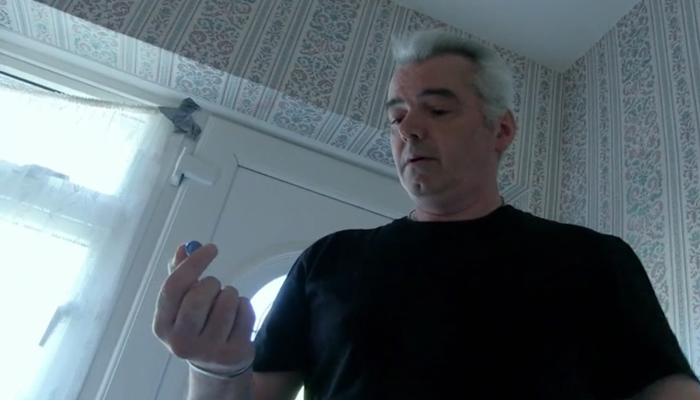 Before the show even got underway we see why Yvette and the team decided to break from format as we're shown what happened while she was filming her opening link to camera. Yvette is seen at the top of the stairs welcoming us to "an investigation that was out of the ordinary" and just as she finishes her line a marble hit Karl Beattie at full pelt. Yvette who was facing the camera saw it shooting from his right and hitting him while everyone was accounted for.
Moments after filming the intro, there was a worrying moment when the team found a knife wedged between one of the cushions on the sofa. Karl said, "that has just made this investigation take a very sinister turn." The team had been shooting in the living room minutes earlier and a replay of their footage from just moments before revealed no knife on the sofa. 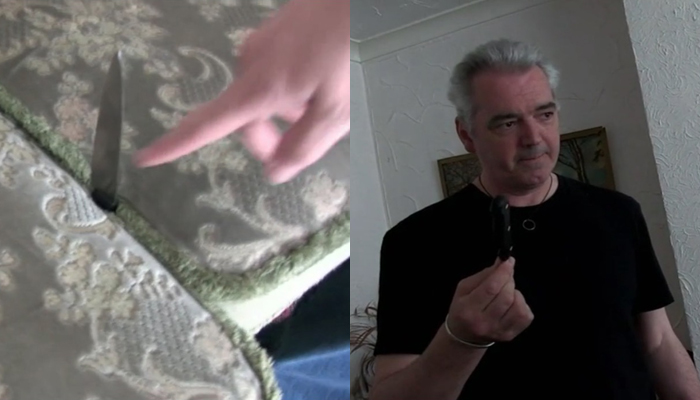 These weren't the only incident that occurred while the crew were shooting cutaways and general visuals around the house in the day. They caught a strange dark shadow and movement in an upstairs window while shooting from outside. While in the bedroom a crucifix fell from the window ledge onto the bed as Karl panned the camera around the room.
While in the master bedroom, an area of the house where the Black Monk is said to appear next to the bedside, the team heard loud knocks from all around them.
Already the team were terrified, Yvette said, "Karl, I'm telling your now, this place is evil. This house is evil." He replied, "I don't think we should be here. We haven't started and I think we should." But unfortunately for Karl, he had no choice but to stay the night.
With so much activity happening, they decided to place four locked off cameras around the house in the most active area. They also places some trigger objects in the rooms and it wasn't long before they caught their first bit of activity on these cameras. 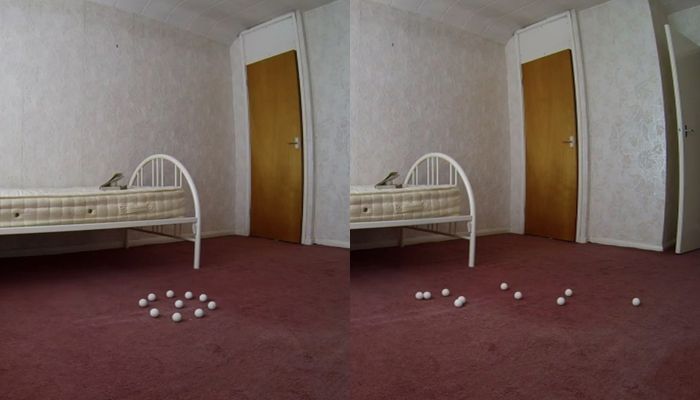 On a locked off camera placed in the middle bedroom, which was one the bedroom of Phillip, the team had placed ten ping pong balls on the floor. The camera catches the balls move seemingly on their own, and not just a bit. All ten balls move a lot.
What's interesting is that the curtains are also in shot and are perfectly still which seems to indicate that there's no draught coming in through the window and nothing else in the room that could be blowing the balls around. Thee balls move in different directions, which would mean a breeze just coming from the window couldn't be responsible. Also, there are times when just one ball is seen to move, other times all the balls move at the same time.
There was also a strange dark shadow in the doorway while the movement occurred. Yvette described this clip as "remarkable footage" and said that this and "the strange sound we heard before the balls move, stands as one of the best pieces of evidence we've caught so far." 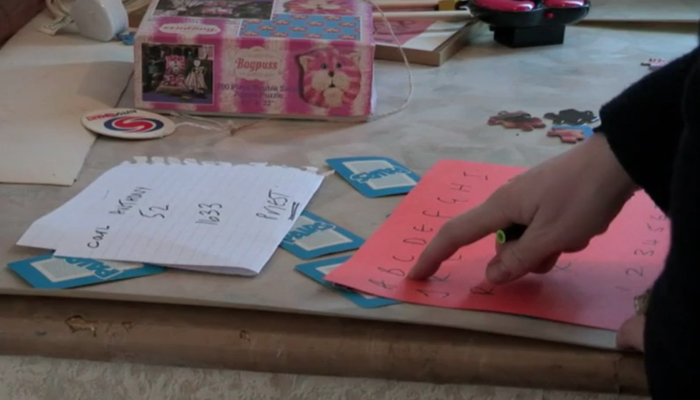 After Karl said he heard something whisper in his ear in the small bedroom, the team decided this was a good place to conduct another experiment. This was the bedroom of Dianne, and when the hauntings started a great deal of the activity was centred around this room. To this day the bed is said to move on its own, so violently that beds have been known to fall apart.
As the house's owner doesn't allow visitor to use ouija boards, Yvette wanting to try a new way of communicating with the poltergeist in the house, a technique she calls a taping board. Yvette wrote the alphabet and the number zero to nine on a piece of paper and then ran her finger across each letter, asking the spirit to spell out a word of phrase by tapping as her finger reach the relevant letter.
They obtained a lot of information this way, the determined that the spirit's name was Carl Anthony, a priest who died at the age of 52 in 1633. When Yvette asked in the priest had a message for them, it spelt out "get out." In response Karl called out to the entity, "well if you want us out, get us out!" 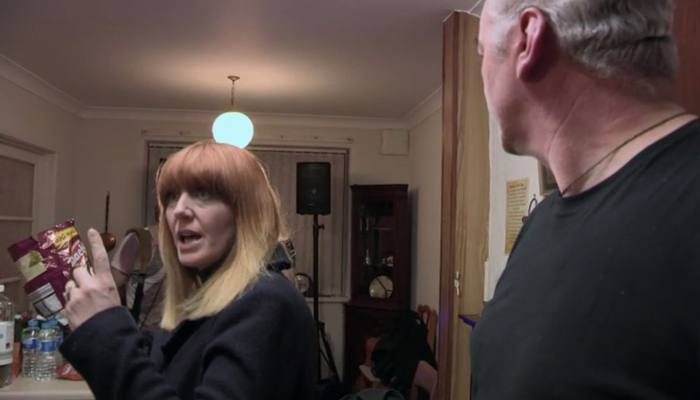 Later on the team were back downstairs, when Karl thought he saw a shadow in the mirror. Moments later they heard something above them in one of the bedrooms, "it sounded like somebody running upstairs, listen," Yvette said. They then felt started to feel odd vibration underneath their feet, then heard bangs and taps coming from the walls around them.
It wasn't until five minutes before then end of the show that they finally turned all the lights out to began their normal vigils. Yvette said, "let's make it go pitch black in this place" and sent Karl off alone. 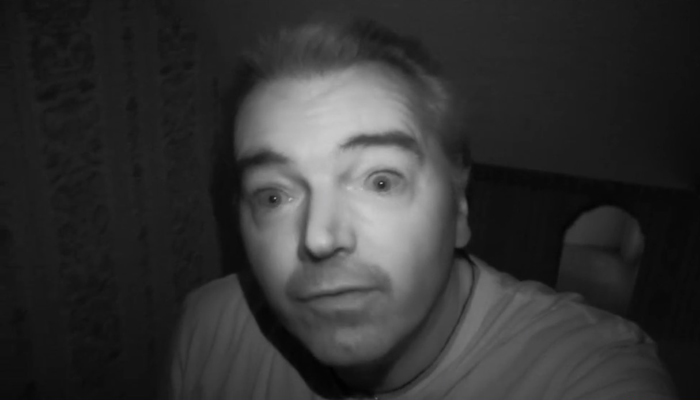 Karl headed off into the darkness on his own while Yvette and rest of the team remained in the kitchen. As he climbed the stairs he said to the camera, "because so much has happened, I kind of stupidly though I'd come up here on my own, everyone is accounted for in the kitchen."
Karl was a little shrot of breath by the time he reached the landing, "I am really scared, more so than I've ever been, wherever we've ever been."
And then the spooking goings on resumed, "I can hear bangs and knocks," Karl said, they seemed to be coming from the walls.
Meanwhile, back in the kitchen Yvette was whispering to the malevolent force in the house, "do something to Karl, do it now," and seconds later the door of the room Karl was in slammed shut on its own.
Karl hear a few more bangs, and then entering the master bedroom found that a doll had fallen on the floor. As he moved in to take a closer look at the toy he heard a growl, and at that point he'd had enough, "there's absolutely no way on earth I'm staying upstairs."
He ran back downstairs to join the rest of the team and the first part of the investigation of 30 East Drive came to an end. You can read about the second part here, which lead on to a Most Haunted Live at the house on Halloween night.
The episode ends with a song called 'Feel Alive' playing over the credits. The song is recorded by White Eskimo, a band that Yvette manages and features her son Will Sweeny as the lead singer. You may remember that another of the band's song featured over the credits in the previous series.
For reviews of all of the new episodes, plus highlights and evidence from the shows, and to find out when Most Haunted is on next, visit the Most Haunted episode guide.
»30 East Drive Part 2 (Episode 2)
»Most Haunted Live At 30 East Drive