30 East Drive, Pontefract: The Most Haunted House In The UK 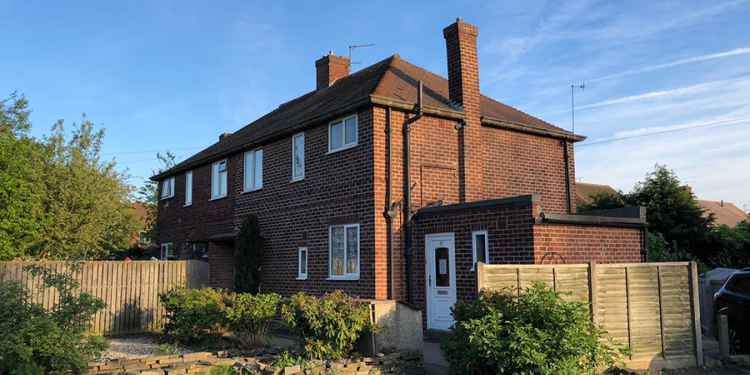 For several decades, Borley Rectory held the title of the most haunted house in Great Britain, and perhaps it still would had it not burnt to the ground in 1939.

Since 1966, it's an unassuming, a typical three-bedroom, semi-detached house on the Chequerfield Estate in Pontefract which has held the accolade of the most haunted residential property in the country.

Reports of poltergeist activity at 30 East Drive appeared in the national newspaper after the family living in the house, the Pritchards claimed they were experiencing supernatural goings on.
The Pritchards, were Jean and Joe and their two children 15-year-old son Philip, and 12-year-old daughter Dianne. It was Philip and his grandmother who witnessed the first creepy occurrence in the house. A cascade of chalk-like dust falling from just below the ceiling. This was just the start of countless inexplicable paranormal events.
In the kitchen, pools of water mysteriously appeared on the floor, all attempts to dry them up failed. The council visited the house to investigate and even dug up the kitchen floor, but the cause was never found.
Lights turned themselves on and off, green foam was said to have oozed out of the taps, cupboards shook violently, doors banged, photographs were slashed by sharp blades, and countless object were witnessed levitating or being thrown.
But the paranormal activity soon escalated and became much more violent. On one occasion a large grandfather clock on the landing toppled over and tumbled down the stairs and smash.
Even this was tame in compared to the night that Dianne was dragged up the stairs by an invisible force. The young girl was standing at the bottom of the stairs when she felt a strange sensation, her long hair started to stand on its end. Without warning she was suddenly flung to the ground and dragged kicking and screaming up the stairs. Soon after the event, red hand marks were clearly visible on her throat.
The nasty spirit behind these occurrences is said to be the ghost of a 16th Century monk known a the Black Monk of Pontefract, also known as Father Michael or simply Fred as he was nicknamed by the Pritchard family.
It's believed that the monk assaulted and murdered a young girl, he was hanged on the gallows which were said to be originally located on the land the estate was built on. He was then thrown down a well and left for dead, that well is said to be right underneath number 30.
The house is also said to be haunted by the ghost of Fred's victim, a little girl who answers to the name of Emma. Her spirit is said to be much less violent than the Black Monk, often described as friendly and mischievous.
What makes 30 East Drive so terrifying is because it's not like a classic haunted location. It's not a Georgian manor, not an old museum, a stately home, a pub, or an ancient castle. The house on East Drive is an normal house, on an average street, a house just like your own home.

Is There An Old Well Under 30 East Drive? 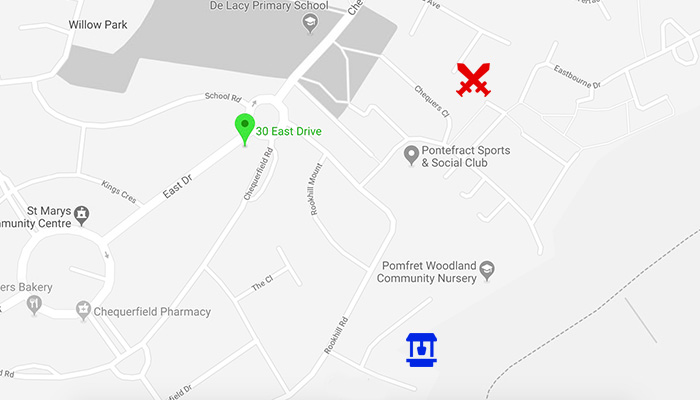 The claim that there is a well under 30 East Drive originates from research on the local area by author Tom Cuniff. He discovered that the town's gallows had been situated directly across the street from the location of what is now 30 East Drive, and that this was where a Clunaic monk who was hanged for the murder of a young girl.
Mediums have built on this story with claims that the monk's body was thrown down a well and some have claimed that the well is directly underneath the house. Well, it's not. Old maps of the area show no existence of a well on the site of the house. However, several maps show a well nearby, the most recent of these is a map dated 1893.
The well was actually located about 300 meters away from the house. It has long since been covered up and now lies within the grounds of High Well School, which makes sense. It's also said that a stream or brook used to run through the site of the house, no such stream is shown on any old maps, they would usually be marked in at least one version of maps of the area over the years.
There is another grim historic site just 200 meters away from the house, the site of a the Battle of Chequerfield. A pivotal battle was fought here during the English Civil War, which ended a Parliamentarian siege of nearby Pontefract Castle. 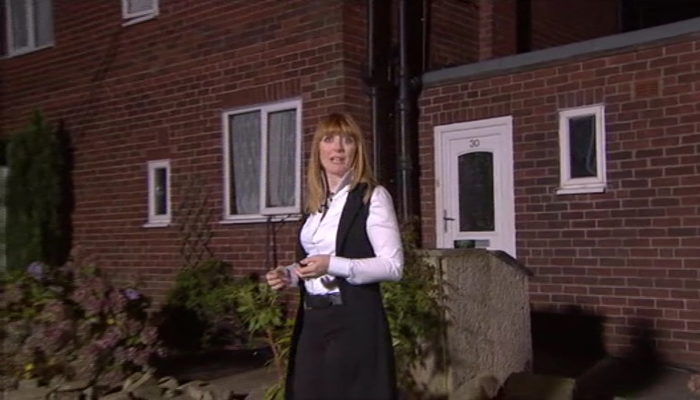 Since the Pritchards left the house, it has remained empty and unchanged, yet the paranormal activity is said to have escalated and number 30 is now a hot spot for paranormal investigators.
Probably the most famous team of ghost hunters to visit the property is Yvette Fielding and the 'Most Haunted' team who conducted a night-long vigil in the house which was broadcast live on Halloween.
The team experienced one of their most violent investigations to date. One team member was dragged up stairs which left him with red marks around his neck. One of the show's camera men fell to the floor screaming after experiencing what felt like his chest being squeezed.
Throughout the live broadcast several objects were thrown around the house, and just after midnight before the show came to a end, a porcelain ornament was thrown across a room which smashed a glass door.

'When The Lights Went Out'

The story of 30 East Drive has also been turned into a movie called 'When The Lights Went Out'. Although the movie does go a little overboard towards the end, the way the plot handles the beginning of the haunting is very consistent with the real life accounts.
The film is set in the 1960s and its makers have done a great job of recreating life in that period in a council house in the north of England, from clothing, to props and lifestyle this movie feels very real.

How To Visit 30 East Drive

It's not just TV crews and movie producers who've visited the house, you can too. There are several paranormal events companies who organise regular ghost hunts at 30 East Drive.
As part of a visit, you'll be one of a small group of around 6-8 people entering the house. The night will consist of vigils and séances, however these won't include the use of ouija boards as the house's present owner has forbidden their use.
On investigation in the last couple of years, ghost hunters have caught the shadowy image of the Black Monk on camera, recorded video of a creepy doll moving on its own, and witnessed countless strange noises. 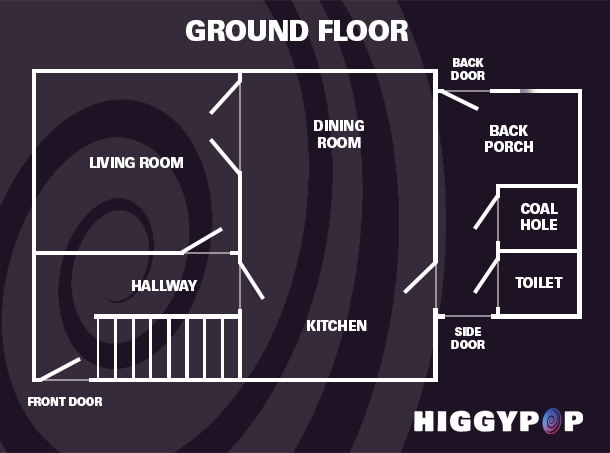 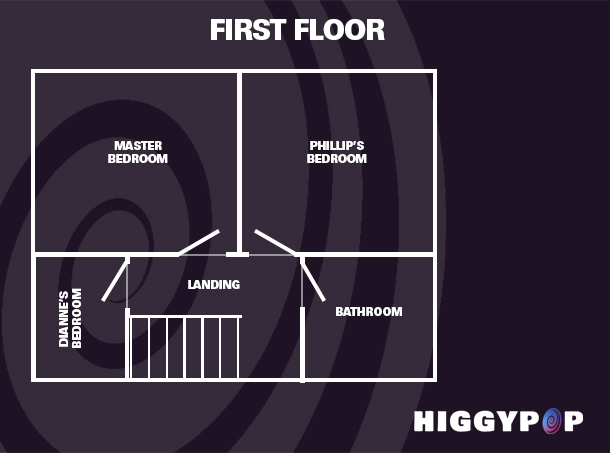 More than five decades after the hauntings began in Pontefract, the house still holds the title of the UK's most haunted house, some even say it's the most haunted property in Europe.
It's a popular venue for ghost hunters and will probably always retained its title, however it was challenged in the 1970s by a similar house, with a similar story in Enfield in North London.
Since the 1970s' Enfield Poltergeist case, no haunted house have managed to grab the same level of national press attention. The mainstream media and the general public have become more cynical over the last few decades, so it's unlikely any house would ever get the same level of media attention again, which means 30 East Drive will remain firmly at the top of the list of the country's most haunted houses.