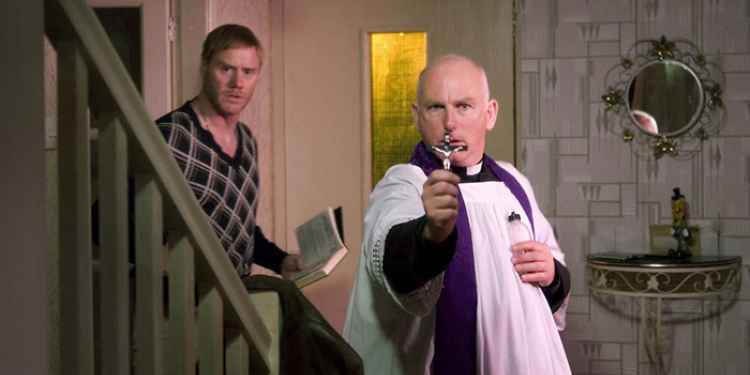 The 2012 movie 'When The Lights Went Out' is based on the real life story of a poltergeist case which took place at 30 East Drive in Pontefract, but how close is the film's plot to the real haunting?
The movie opens with the words, "based on a true story" and this is true. The movie is written and directed by Pat Holden, the nephew of the family who were at the centre of the haunting. In fact his mother, Rene, spent a lot of time at the house during the case. Pat Holden stated that he embellished the story to make it fit into a horror movie template.
Set in 1974, the movie starts on the day that Jenny and Len Maynard move into their new council house with their 13-year-old daughter, Sally. These details don't follow real life, the family involved in the actual case were Jean and Joe Pritchard. They lived in the council house in Pontefract with their 15-year-old daughter Dianne, but they also had a son named Philip who was 12 at the time of the haunting.
The year the movie is set in is also different to the year the haunting took place. The events actually began eight years earlier in 1966. The house used in the movie isn't the actual house, but it does look very similar.

Sally is the first member of the family to notice the paranormal activity in the house in the movie. However in the real house it was Philip who first experienced something odd one summer's day in the living room with his grandmother. They saw a cascade of chalk-like dust falling from just below the ceiling.
This was just the start of countless inexplicable paranormal events which included the appearance of pools of water, cupboards shaking violently, doors banging, photographs being slashed, and countless objects were witnessed levitating or being thrown.
The first activity that Sally experiences in the film is problems with the taps on the kitchen sink, this was similar to true life. One of the first phenomenon they witnessed was green foam oozing from taps. We also see the power being mysteriously cut off in the house, this is also similar to life - lights were said to turn themselves on and off.
On one occasion a large grandfather clock on the landing toppled over and tumbled down the stairs and smashed, this is also reenacted in the movie. The moment when Len is trapped in the house's coal room store also mirrors reality. Joe Pritchard was indeed said to have been alone in the coal hole, he became trapped and reported feeling a presence in there with him.
Later in the movie a reporter visits the house and initially thinks it's not haunted, until he's about to leave and an unseen force slaps him around the face. In reality it wasn't a reporter but a local vicar who visited the house.
According to Colin Wilson's 1981 book, 'Poltergeist!', Reverend Davy came to discuss the possibility of an exorcism. He spent an hour and a half in the house with the family and nothing out of the ordinary happened at all.
Wilson wrote "Mr. Davy finally looked at his watch and said he ought to be getting home. Jean Pritchard said: 'I'm sorry we've dragged you all this way for nothing'. And as she spoke, the house resounded to loud thumps that came from overhead. And a small brass candlestick jumped off the mantlepiece on to the floor." Like the journalist in the movie, this was enough to convince Reverend Davy that there was "something evil" in the house.

The movie's story continues when Sally's parents call in a paranormal investigator, who along with a medium, conduct a séance in the house in an attempt to help move the entity on. Unfortunately they were unsuccessful and the séance became violent.
Although the séance didn't have the desired outcome, the medium was able to tell the family what was responsible for the haunting. She told them that the benign spirit of a young girl who was murdered in a nearby forest haunts the house, but a more malevolent spirit is also present. Later we learn that this darker spirit is the ghost of a monk who in life preyed on young girls. He was eventually caught and was hanged for his crimes.
This matches the real haunting. The evil spirit of a 16th Century monk known as the Black Monk of Pontefract or Father Michael. It's believed that the monk assaulted and murdered a young girl, he was hanged on the gallows which were said to be originally located on the land the estate was built on. He was then thrown down a well and left for dead.
Like in the movie, the house is also said to be haunted by the ghost of Fred's victim, a little girl who answers to the name of Emma. Her spirit is said to be much less violent than the Black Monk, often described as friendly and mischievous.
Next in the movie, Len convinces the local priest to perform an exorcism on their house, but again this proves to be unsuccessful. This is true of the real life haunting too, the house was indeed unsuccessfully exorcised.
At one point during the real haunting case, Dianne was dragged up the stairs by an invisible force. She was standing at the bottom of the stairs when she felt a strange sensation, her long hair started to stand on its end. Without warning she was suddenly flung to the ground and dragged kicking and screaming up the stairs. This incident is retold towards the end of the movie.
From this point onwards the film gets a little out of hand, but this is merely artist license. The haunting ends in the movie with a showdown with the Black Monk that manifests and attempts to kill Sally. She's saved by the spirit of the young girl, who materialises and drives off the Black Monk.
In reality the family continued living in the house for many years and eventually got used to the supernatural forces in their home, they even gave the ghostly monk the nickname Fred. The family eventually left the house but the hauntings didn't stop, some say it got worse.
The house is still regularly investigated by paranormal investigators to this day. During the production of the movie, Pat took Diane back to the house while researching the film, he says she was still too scared to go into the living room. This is referenced at the end of the film, closing text reads:
"The Maynard haunting is considered the most violent in European history. Mrs Maynard lives in the house to this day. Sally still won't venture into her former bedroom."