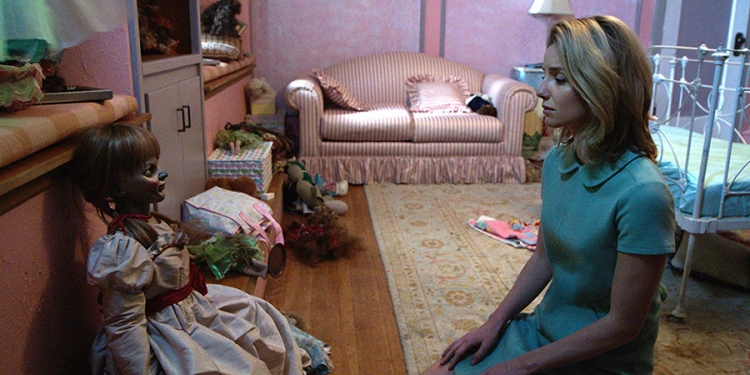 Unlike the first two movies in 'The Conjuring' series, 'Annabelle' isn't directly based on a true story throughout. In fact it's only the start of the movie that mirrors real life.
The film opens with Ed and Lorraine Warren, who viewers will be familiar with from 'The Conjuring', helping two young students nurses, Debbie and Camilla, and Camila's partner, Rick, who are being tormented by a doll with a demonic attachment.
In the real life case this is Deirdre Bernard, her roommate Lara Clifton and her fiancée Cal Randell. We hear Deirdre, or in the movie's reality, Debbie, telling the self-proclaimed demonologist about the haunting, which has grown in intensity since she received the doll as a gift for her birthday.
This is all true and a longer version of the scene is actually shown in the first Conjuring movie to introduce Ed and Lorraine. However, from this scene onwards, the movie is not true to life. There was no John and Mia Form, no fire started by the doll, no priests were injured, and Annabelle didn't cause any of the other haunting phenomenon seen in the movie.
Annabelle also never appeared as a human ghost in the real life case, this is because the doll was believed to be haunted by a demon, a non-human entity that tricked the nurses into inviting it into the doll and into their lives - there was no Annabelle.
However in the movie, the spirit attached to the doll is said to be Annabelle Higgins, a member of a fictional cult called The Disciples of the Ram, who murdered her parents. They lived next door to John and Mia and break into the house. Annabelle kills herself in the bedroom, this just happens to be the room where Mia keeps the collectable doll that John bought her and her evil spirit is transferred.
The real life Annabelle doll looks very different to the sinister looking doll seen in the movie. In reality Annabelle was a Raggedy Ann doll and if you look carefully you can see a doll resembling the real Annabelle in the shop scene at the end of the movie.
"Since the beginning of civilization, dolls have been beloved by children, cherished by collectors and used in religious rites as conduits for good and evil."

The Real Story Of Annabelle 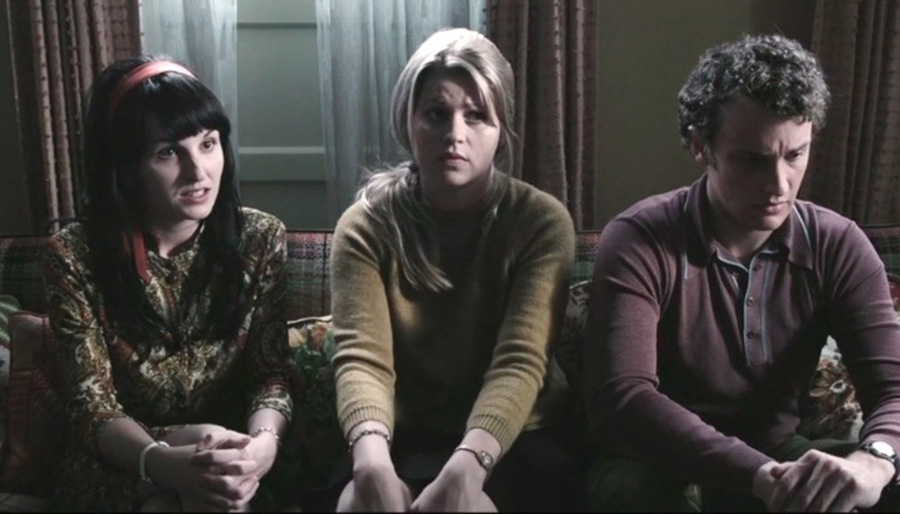 The real case took place in Santa Monica, California in 1968. It started for Ed and Lorraine when they got a call from a priest name Father Everett. Ed took the call and was told that two young nurses have communicated with what they thought was a spirit.
The priest asked Ed, "would you investigate the case further, and as a demonologist, recommend if any formal church action should be taken?" Although the details were sketchy, Ed and Lorraine agreed and drove straight to the girls' apartment armed with a tape recorder to interview them.
The 25-year-old girls lived in a modern, low-rise apartment complex. Lara's fiancée Cal visited regularly and was also affected by the doll and was present to tell the Warrens his side of the story. The interview took place in the girls' kitchen.
Deirdre started off by introducing Ed and Lorraine to Annabelle, pointing across the kitchen table and at the doll that was in the living room. Lara jumped in at this point and said, "the big Raggedy Ann doll. That's Annabelle. She moves!"
Deirdre continued with the story of how she was given the doll as a birthday present by her mother. She recalled, "about a year ago, the doll started to move around the apartment by itself. I don't mean it got up and walked around, or any such thing. I mean when we'd come home from work it would never be quite where we left it."
Over the next few days the girls noticed subtle changes in the doll's position, for instance, its legs would be crossed, or its arms would be folded in its lap. After a week or so, the girls started to get spooked by this and decided to test it. So one morning Deirdre was sure to cross the doll's arms and legs and sure enough, when they came home that evening her arms and legs had moved.
Then things stepped up a notch when the girls came home one night to find that Annabelle was in a completely different room. The doll had been left in the bedroom that morning, but they found her sat in a chair waiting for them near the front door.
In the movie Annabelle starts leaving scary drawings for Mia and wrote on the student nurses' walls with the phrase "miss me?" This is similar to the real life case. Deirdre told the Warren, "it would leave us little notes and messages. The handwriting looked to be that of a small child." The notes the real life doll left would say things like "help us" and "help Cal". 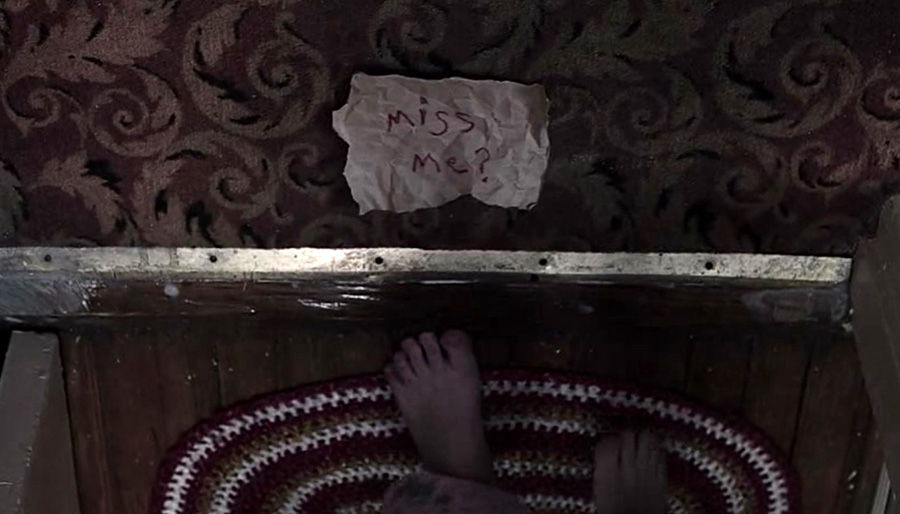 At this point in the story Ed suspect that they were the victims of a cruel prank, "it sounds like someone had a key to your apartment and was playing a sick joke on you." But Deirdre said, "that's exactly what we thought, so we did little things like put marks on the windows and doors, or arranged the rugs so that anyone who came in here would leave a trace that we could see." But never once did it turn out that there was a real outside intruder.
The girls finally realised they needed help when they came home and found blood on the back of the doll's hand, and three drops of blood on its chest. They first contact a psychic medium who came to their apartment and held a séance.
The medium told the nurses that a seven-year-old girl named Annabelle Higgins had died on the land that the property was built on. The medium relayed the message to the girls that these were "happy times" for Annabelle.
Deirdre explained to Ed and Lorraine, "because everyone around here was grown-up, and only concerned with their jobs, there was no one she could relate to, except us. Annabelle felt that we would be able to understand her. That's why she began moving the rag doll. All Annabelle wanted was to be loved, and so she asked if she could stay with us and move into the doll. What could we do? So we said 'yes'."
Ed found this concerning. It was his belief that by inviting the entity into their home they gave it permission to attach itself to the doll and only made it stronger.
It seems Ed may have been right as the activity escalated further from this point. Cal chipped in and told the Warrens, "the thing gives me bad dreams." But that wasn't all. Cal also claimed that he was attacked by the doll.
He was alone with Laura in the apartment one night, when they both heard a sound coming from Deirdre's bedroom. Assuming someone had broken into the apartment, Cal went to check the bedroom, but found nobody there. The only thing out of place was Annabelle, which was lying in the corner of the room.
Cal said, "I got close to the doll, I got the distinct impression that somebody was behind me." He said that when he swung around there was no one there, but he felt a pain in his chest and had blood all over his shirt. When he opened his shirt he found what looked like claw marks on his chest.
After hearing the story, Ed told the students, "you inadvertently brought a spirit into this apartment and into your lives," but he reassured them, "we're going to be able to help you." He continued, "to begin with, there is no Annabelle! There never was. You were duped."
But according to Ed, they were dealing with a spirit albeit a non-human one, "ghosts-human spirits plain and simply can't bring on phenomena of this nature and intensity. They don't have the power. Instead, what's taken over here is something inhuman."
The first thing Ed did was contact a local priest named Father Kevins and asked him to come to the house to perform a blessing and exorcism. The ritual only took about five minutes to perform in each room of the apartment and was completed without "trouble or mishap". 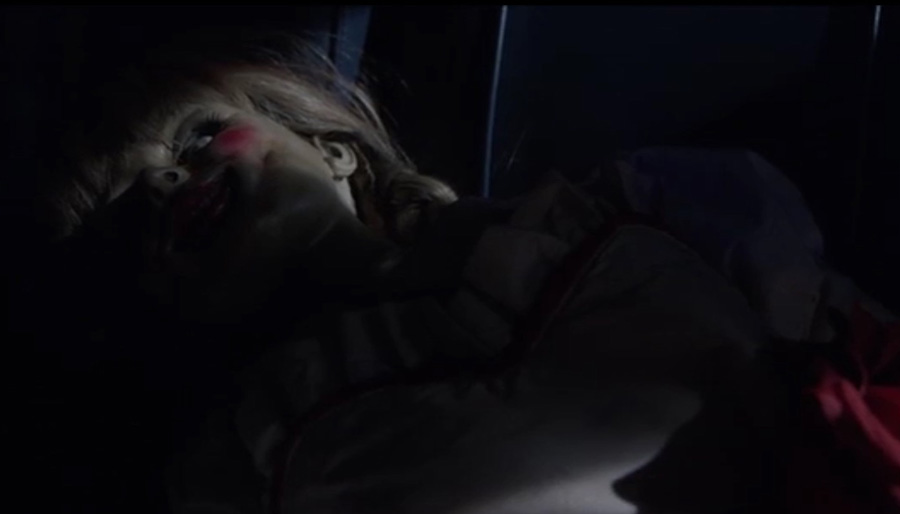 The Warrens took Annabelle away with them, placing the doll on the back seat of their car during the journey, but according to the demonologists they found the doll had not been freed of its attachment and it made their journey hazardous. They say that their car started to stall, causing the power steering and brakes to repeatedly fail. After the third time this happened, Ed reached for his holy water and sprinkled it over the door. The rest of their car journey home was uneventful. 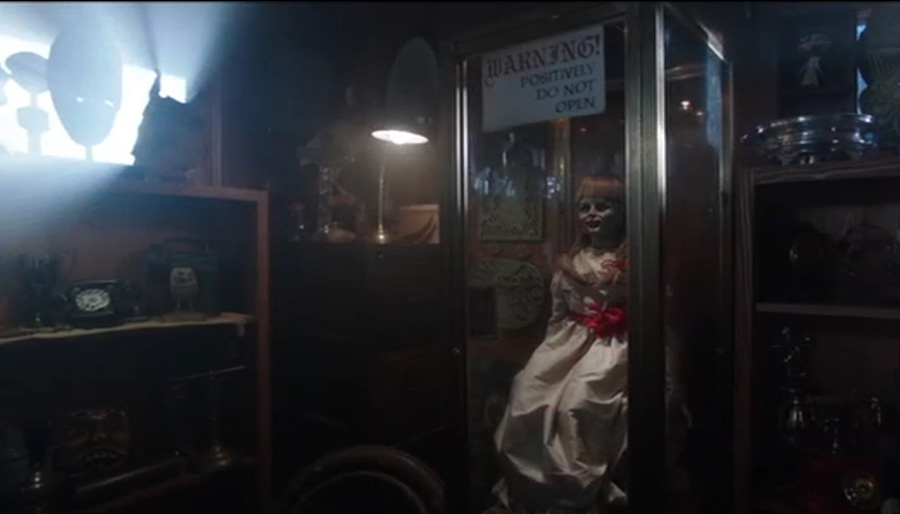 Once home Ed placed the doll on a chair next to his desk and the Warrens reported various odd activity as a result of its presence in the house. Eventually it was transferred into a specially built case, where it sits to this day in the Warrens' occult museum.
This is confirmed at the end of the movie, when a caption on the screen reads, "Annabelle now sits in a glass case inside the artifact room of Ed and Lorraine Warren. It is blessed by a priest twice a month."