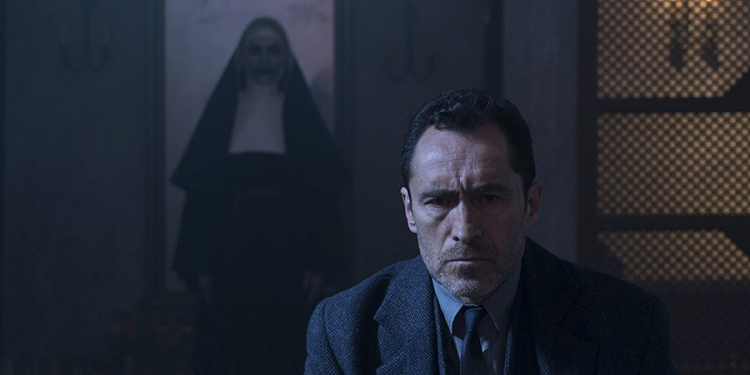 'The Conjuring' movie franchise, and to a lesser extent the 'Annabelle' series, is loosely based on the real life case files of American paranormal investigators, husband-and-wife team, Ed and Lorraine Warren. The 2018 movie 'The Nun' serves as a prequel to the movies in the franchise, but how close to reality is the tale of the demonic nun, Valak?
We've been uncovering some of the real life haunted histories of Hollywood movies, so now it's time to dissect the paranormal elements of 'The Nun' and compare it to the true stories that influenced it.
Set in 1952 - more than a decade before the original Conjuring movie - the year that the Warrens founded the New England Society for Psychic Research. Therefore, the plot isn't directly based on any of the Warrens' case files, but elements of it are based on their experiences.
The movie follows Father Burke, a Roman Catholic priest and a nun named Sister Irene who are sent to the Abbey of St. Carta in Romania to investigate reports that the two nuns living there had been attacked by a supernatural force. They slowly discover that the evil force behind the incident is a demonic nun.
The nun will be familiar to fans of the Conjuring series, but the storyline might also be familiar to some viewers. The story, by Conjuring director James Wan, is based on the plot of the 1986 Sean Connery film 'The Name Of The Rose'. The similarities are plane to see. The 80s movie, which is in turn based on an Italian novel of the same name, follows a Franciscan friar who is sent to a Benedictine abbey to determine whether the Devil is responsible for several untimely deaths there.
Of course in 'The Nun' the investigation of the monastery reveals that it is a demonic servant of the Devil behind the killings, whereas in 'The Name Of The Rose' it turns out that a human is responsible. 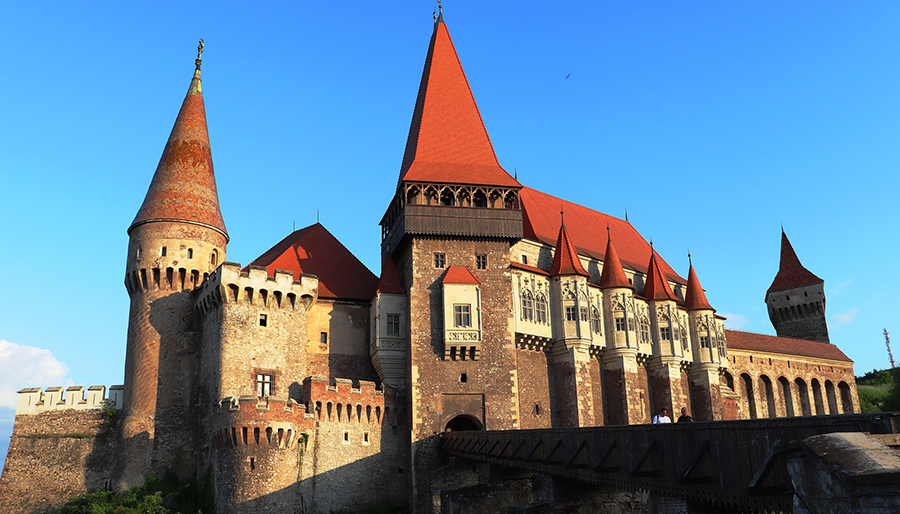 Although the storyline is fictional, the Romanian monastery at the centre of the movie is based on a real place. In reality the Abbey of St. Carta, a former Cistercian monastery, has stood in the Țara Fagarasului region in southern Transylvania in Romania since 1206. The historic building, which is built in the shape of a cross, attracts thousands of tourists per year - but it wasn't where the movie was actually shot.
The supernatural occurrences that take place in the movie didn't really happen at the real-life abbey, but St. Carta is said to be haunted by the ghost of the cistercian monks who once lived there. Due to their harsh fasting regimes, the monks often died young and were buried in the abbey's grounds, hence why they are believed to still roam there - especially in the cellar where the chairs are said to move on their own.
Although set in the real-life Abbey of St. Carta, the film was actually shot at various locations across Romania, including the equally as creepy Corvin Castle, which is similar in appearance to St. Carta, but in better condition as the Abbey of St. Carta is now in partial ruin. 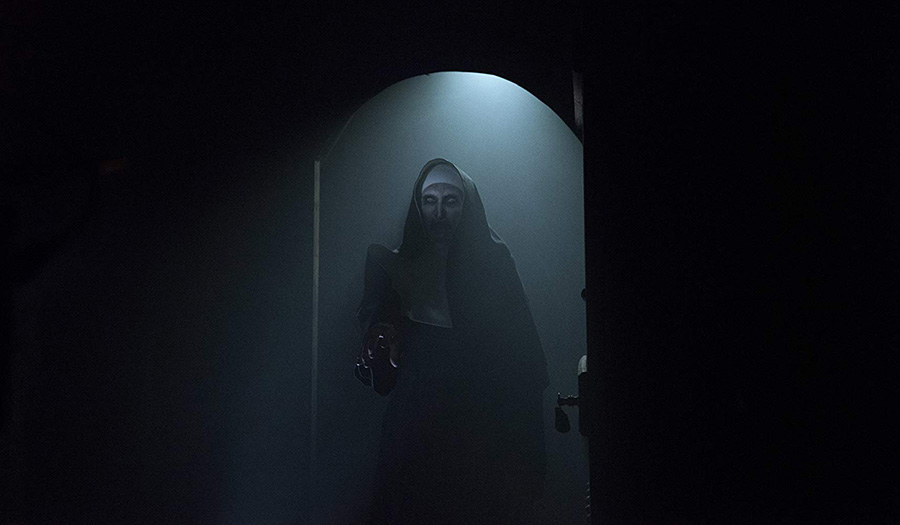 So, what about the evil nun? Did she really exist? This isn't the fist time we've encountered the cowl-wearing demon. The sinister character, known as Valak, first appeared in 'The Conjuring 2' in a scene set at the famous Amityville house. The demon appears to Lorraine in a vision as a premonition of what's to come when the couple move on to investigate their next case - the haunting of family in Enfield, London. This is the main plot line of 'The Conjuring 2'.
So, does this mean that Valak was genuinely part of Ed and Lorraine's case files? Well, yes and no. Valak was never the evil presence behind the Enfield haunting, the character was merely added to enhance the storyline - but, the character is based on several encounters that the Warrens had.
The idea of a ghostly nun comes from the ghost hunting duo's investigation of Borley church during a trip to England. The church is located close to the famous Borley rectory, that was given the title of the most haunted house in Great Britain by legendary paranormal investigator Harry Price. The ghost of a nun is said to have often been spotted at twilight in the grounds of the house.
The rectory was destroyed by fire and demolished in 1944, but it's since been said that the nun continues to haunt the church. Ed and Lorraine went to investigate the church after they heard of the reports of the phantom nun, as well as reports of bells ringing for no reason, and stories of a headless monk.
The real life ghostly nun is said to be the spirit of a nun who had an illicit affair with a monk from a nearby benedictine monastery. The story goes that the monk was executed and the nun was buried alive in the wall of the convent, which was located near the church and its rectory.
While investigating the church with a team of photographers, Lorraine became aware of the nun's spirit. As soon as she entered the hallowed building, she told her colleagues, "I feel the presence of a nun in this church". Their investigation was carried out in total darkness, the photographers were using infrared film to capture images in the darkness.
When their films were developed they found they had captured the ghostly image of a nun. The photograph shows her praying as she walked down the aisle. This sighting almost certainly influenced the movie's character of the dark, towering figure dressed in a habit, but what about the name.
Valak is known as "The Defiler" in the movie, but in reality Valak is believed to be a real demon. Its existence is well documented and dates back hundreds of years. In real life Valak is more commonly spelt Valac, and holds the title of the Grand President of Hell who commands legions of demonic minions.
Although Valak is believed to be a real demon, it has never been said to take on the appearance of a nun. Rosemary Ellen Guiley's 'Encyclopedia of Demons and Demonology' describes Valac as a fallen angel that most frequently takes on the appearance of a small boy.
"Valac fallen angel and 62nd of the 72 spirits of Solomon. Valac is a president who appears as a small boy with angel wings riding on a two-headed dragon. He gives true answers about hidden treasures. He reveals where serpents can be seen and delivers them harmless to the Magician. He governs 30 legions of demons."
'The Encyclopedia of Demons and Demonology'
This references the demon's listing in 'The Lesser Key of Solomon', a demonology book from the 17th century. In Solomon, Valac is listed as a child with angel wings who delivers "true answers of hidden treasures" while commanding a legion of demons. The book takes its name from the Biblical figure King Solomon who is said to have summoned each of the demons up.
Valac is also mentioned in several other books and grimoires, which are ancient magical compendiums that delve into witchcraft and demonology.
The movie version of Valak has little to do with the "real" Valac, who never took the form of a nun - but these elements were brought together with one other encounter - that of a dark demonic entity.
Lorraine told James Wan, director of the Conjuring series, that she witnessed a demonic force in her own home while in bed shortly after investigating the Amityville horror house in 1976. She claims she started to feel the presence while reading a book, then a black mass that took the form of a whirlwind entered the room.
Lorraine says she felt the need to prayed to be released from this evil presence, telling it to "leave and go back where you came from." This apparently worked and the dark entity left her alone.
Back in the Conjuring universe, 19 years after the events that take place in 'The Nun', Carolyn Perron watches as Ed and Lorraine present footage of their attempt to exorcise a possessed Maurice. In the footage, Maurice grabs Lorraine, giving her visions of Ed dying, which initiate the Warrens' investigation of the Perron farmhouse haunting, as well as their encounter with Valak itself.