Was Karl From Most Haunted Really Dragged Upstairs By The Pontefract Poltergeist?

This article is more than six years old and was last updated in April 2018. 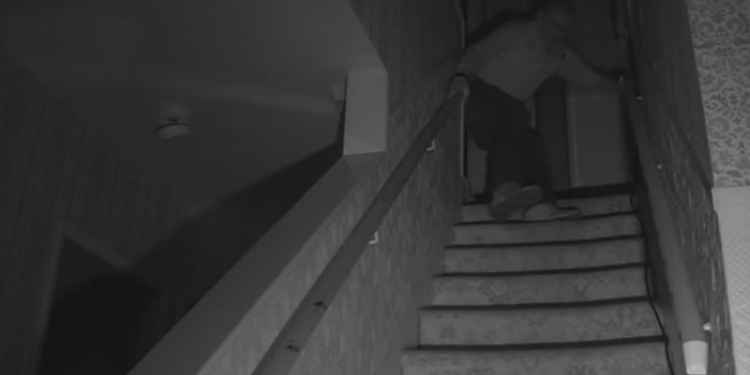 There's been some backlash from eagle-eyed viewers of Most Haunted after they spotted what some though might be faked paranormal activity during the show's live broadcast from 30 East Drive in Pontefract on Halloween night.
About halfway through the show Karl Beattie was shouted while his wife and host of the show, Yvette Fielding was conducting a vigil with entertainer Paul O'Grady.
Yvette, Paul and the rest of the Most Haunted crew ran upstairs to find Karl shaken in one of the bedrooms of 30 East Drive, which is said to be haunted by the spirit of a monk.
Karl told his concerned team mates, "something pulled me up the stairs and I couldn't get away from it."
The moment wasn't shown live because the cameras were all on Yvette at the time. But the team had placed four static cameras around the house, one of which was pointing at the stairs as this is said to be one of the most active parts of the house. In fact, a young girl from the Pritchard family was dragged up the stairs herself when the activity first started in the house in the 1960s.
The locked off camera, which was also being streamed live on the internet, caught the moment when Karl was dragged against his will upstairs. The show's producers were able to play the clip back during the live broadcast.

It was actually a pretty chilling moment which left Karl shaken and shocked. The show's guest, Paul O'Grady said he was "pretty shocked to tell you the truth, that is pretty shocking. There's no way for him to fake that. To go back like that, he's being pulled."
It was probably one of the show's most violent moments in its history, but while viewers watching live on television were convinced that this was a genuine supernatural incident, some watching the live stream of the static camera online weren't so sure.
Eagle-eyed viewers of the live stream said that moments before Karl was pulled upstairs, they saw him emerge from the landing with a length of white rope attached to his waist. Skeptics claimed that Karl was then pulled by this piece of rope.

The rope was a cam cable attached to Karl's back which was put through Karl's belt. Hope that helps. X

The show's producers have been quick to respond to these concerns. Yvette addressed the criticism just hours after the show on Twitter saying that what viewers mistook for a rope was actually a camera cable which Karl had tied through a belt loop to avoid a trip hazard.
The stunt generated a lot of negative press for what was otherwise a great Halloween edition of the UK's longest running ghost hunting show.
The show generated more than 50k tweets using the hashtag #MostHauntedLive, which trended worldwide. There were consistently more than 10k people viewing the live webcam streams at any one time. The show became the highest rated show on Really to date, and it out performed Channel 4 and 5 in its time slot.
Eventually Karl, the show's executive producer was forced to make a video explaining the rope/wire incident with the help of one of Most Haunted's camera man, Stuart Torevell.

Karl said the video was aimed at the Most Haunted fans who had asked about the cable that was attached to him. According to Karl, throughout the show there was two miles of cable wrapped around the house and feeding pictures and sound to the broadcast truck parked outside.
In the video Karl holds a similar cable to the ones used on the show. Karl explains that one end of the cable is attached to the camera, the other end connects to another connection which leads to the truck.
Karl, who also takes on a role of camera man on the shows, demonstrates what they do with the cable to stop jolting the camera. Karl says it's standard practice to loop the cable with a little slack through your belt.
He says by attaching the cable to your body in this way, if someone steps on the cable you feel it. It also stops it from pulling on the camera. 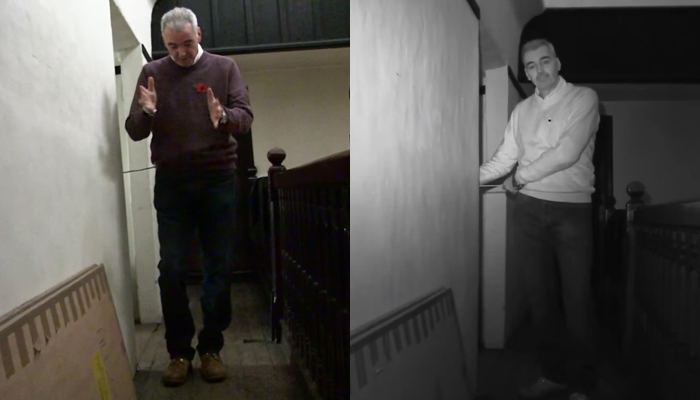 However, there's still the issue of the camera cables being black and the rope that was spotted on the webcams being white. In the explanation video, Karl asked Stuart to switch the camera to night mode and shows how the infrared light source causes the cable to appear white rather than black on screen.
Karl then pulls out another cable, a BNC cable, and shows it to the camera on night vision, it too appears white. When Stuart switches back to day vision, it's revealed the cable is actually purple. Karl says that on location they have black, purple, blue, orange and red cables, but a lot of them show up as white on infrared cameras.
For reviews of all of the new episodes, plus highlights and evidence from the shows, and to find out when Most Haunted is on next, visit the Most Haunted episode guide.