As Really's #13NightsOfFrights continues, Nick Groff and Katrina Weidman tackle the house at the centre of one of England's most famous hauntings, an aggressive poltergeist that lurks at 30 East Drive, Pontefract. 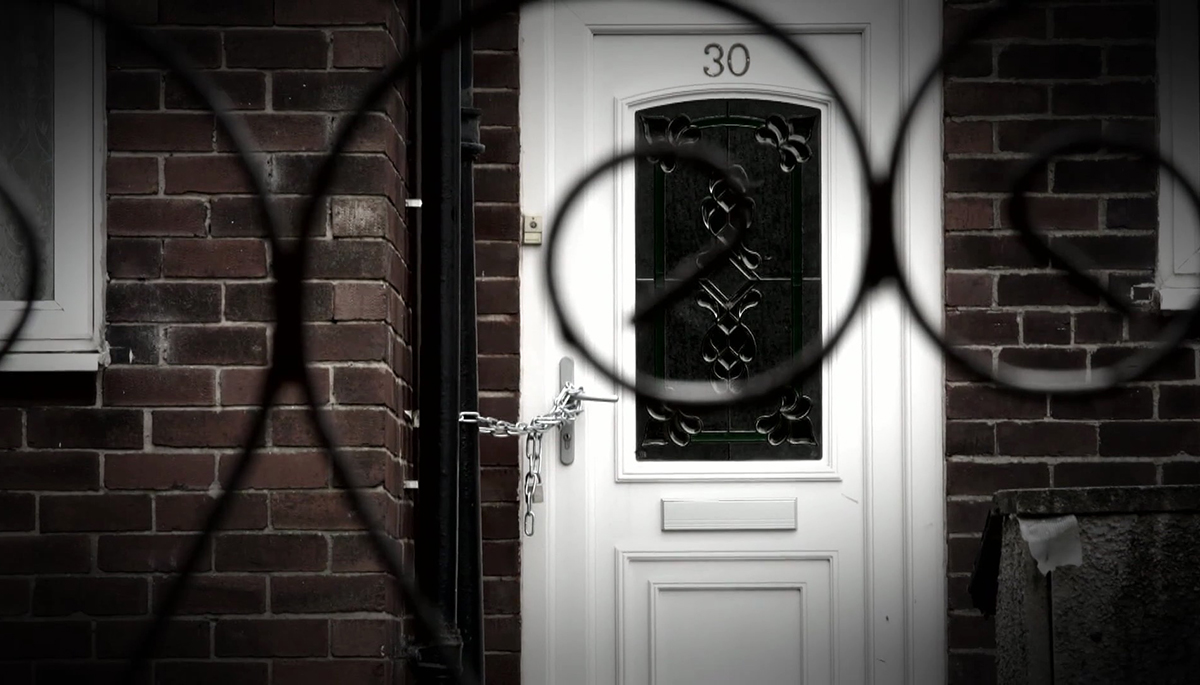 The episode started with a clip of an old British television broadcast. In a very proper English accent the presenter said, "this evening we're outside 30 East Drive, also known as the Black Monk House. The poltergeist activity in this house is said to be some of the most vicious in Europe. If not, the world. In 1966, Joe and Jean Pritchard moved into this house behind me with their children, Philip and Dianne. The horrors that then took place are the stuff of nightmares."
'The Yorkshire Haunting: A Paranormal Lockdown Special' originally aired in 2016, but since it's not been shown previously on the Really channel, the network, which has become known as the home for paranormal television, aired the two-hour-long episode as part of their Halloween schedule.
The pair explain that their trip to the UK came about after a dramatic investigation they did at the Hinsdale House in New York. Nick explains at the start of the Halloween special that after leaving Hinsdale he was haunted in his own home.
This lead him to investigate his house with a spirit box, a device that investigators believe allows spirits to communicate in the form of words and sentences. It's fair to say that the sounds coming through the device were hard to make out, but Nick thought one was saying "Pontefract," which led him to the conclusion, "I think there's something that's lingering from the Hinsdale that has a connection with the Black Monk house."
It was quite a leap to assume this connection, but Nick said "enough is enough" as his plan to come to England to end his personal haunting begins to take shape.
Nick then tells us the history of the Pontefract Poltergeist case. Nick says he's been reading about the famous British case for years, but admits "I don't know what it has to do with Hinsdale."
Nick and Katrina seek out the help of demonologist John Zaffis. He tells them "this case dates back into the 1960s, the children were choked in the houses. Things would get broken, things would get throw. It was a horrific poltergeist case." Perhaps Nick is right, John adds, "I don't think there's any boundaries in regards to where the spirit can travel."
But why would a spirit from East Drive be talking to Nick through his spirit box at home in the US? Katrina explains, "the demonic work in a network. So if one entity knows who you are, the rest of them know who you are."
Nick added, "I think everything John said is real and true. This is our only choice. We have to go to the Black Monk house."
Will Nick get the answers he's looking for as he travels to Pontefract with Katrina? 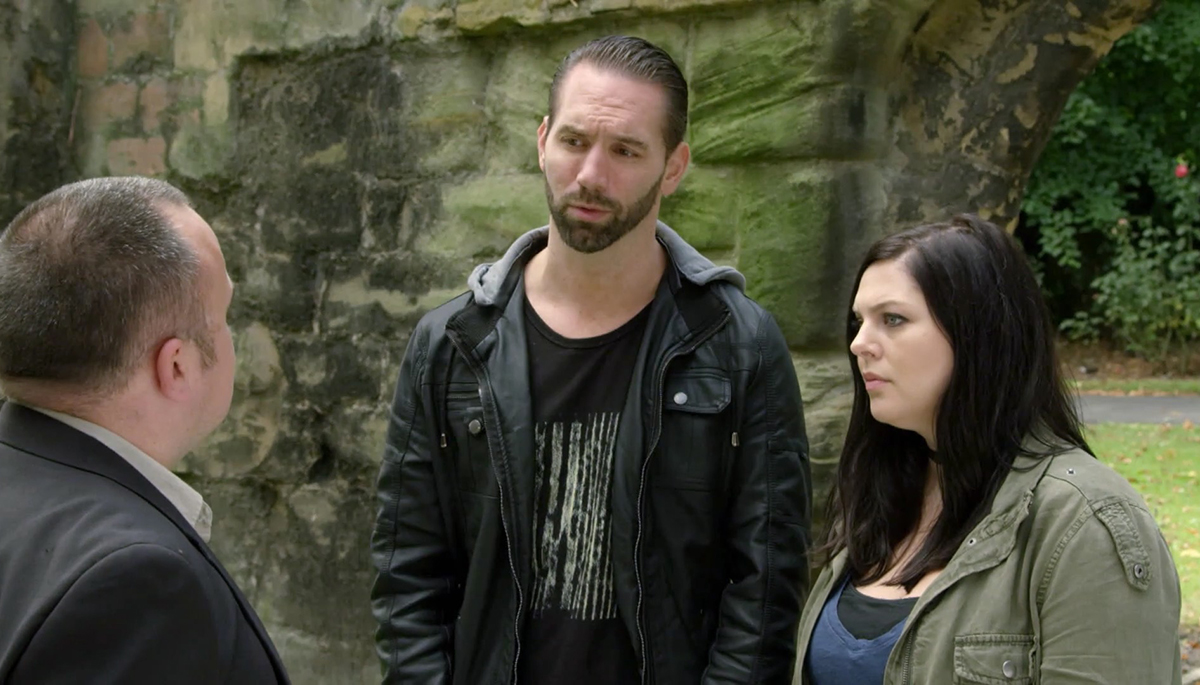 Since this is a Halloween special, you get a bonus 40% of Nick and Katrina. 100 hours of investigation rather than the usual 72. Approaching the house, Nick said "my whole entire career has led up to this."
Katrina said, "my first thought on seeing the house is that it's so tiny that I can't believe these horrific events happened here." She adds, "some times evil does lurk in the nicest neighbourhoods." You can tell Katrina is a stranger to Pontefract.
After standing outside and looking at the house they left without going in to arm themselves with information first. They meet local historian Mike Covell in the ruins of a nearby church. Mike tells the investigators that 30 East Drive is at the epicentre of lots of dark history. He says, "in terms of the historical aspects of Pontefract, all those overlying layers all seem to match up in one particular area, which is 30 East Drive."
The pair then move on to The Liquorice Bush pub in the town where they meet Andy Evans, author of a book on the location, 'Don't Look Back In Anger'. Andy tells the investigators the local legend of the black monk from whom the house gets its name.
He then gave them a warning, "we found the activity does increase when we get bad weather." With bad weather forecast he tells Nick and Katrina, "please be very careful what you're doing and try to stay together."
The duo then talk to Carol Fieldhouse, who has lived next door for almost 30 years and knew the Pritchard family who were at the centre of the original case. She told them, "Joe like to drink, he liked to party, that's how it were. 'til He got locked in the coal house and he came out of there a broken man." 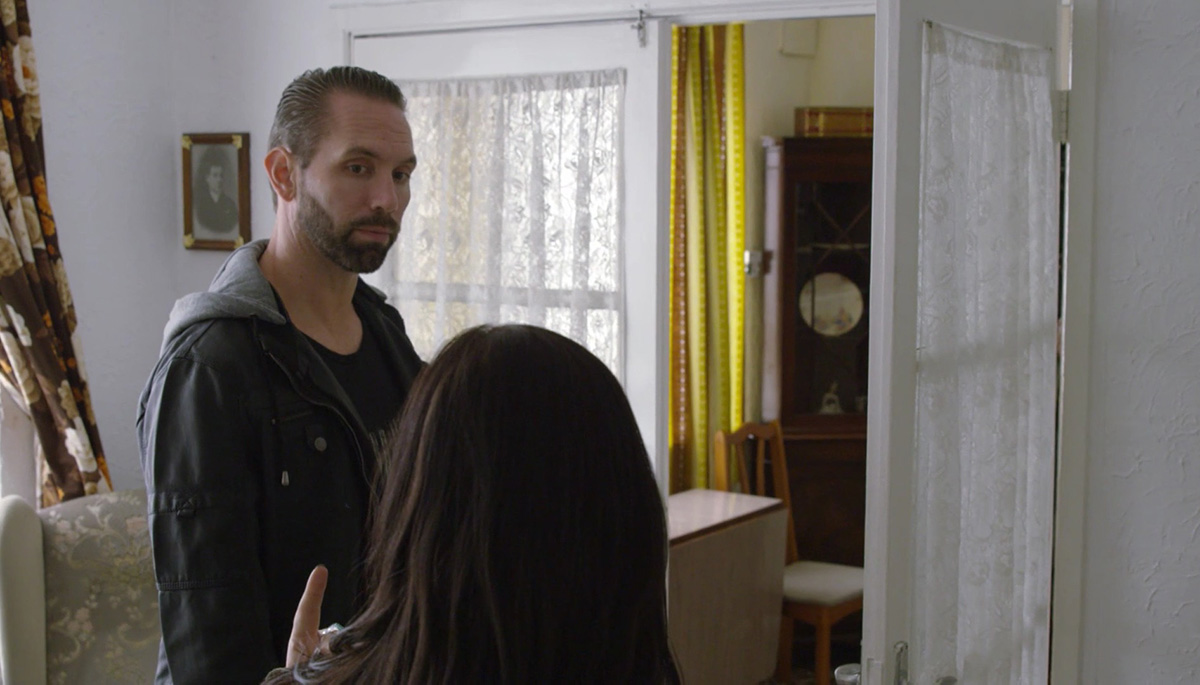 Finally Nick and Katrina enter the infamous house, which they describe as oppressive. Katrina's first thought is, "it smells funny." While Nick says, "doesn't it feel like you've walked into somewhere you shouldn't?"
They are soon joined by Phil Bates, who has known about the house for decades. He gave the investigators a tour of the house and shared with them many of the stories of strange happenings there including the stairs where the family teen daughter, Dianne, was pulled up the stairs by the throat by an unseen force, and the bathroom where Joe Pritchard passed away in the 1970s.
As night falls outside, Nick and Katrina switch their cameras to night vision and begin their 100 hour lockdown inside the house. A chain was wrapped around the door handle by Phil so that no one can get in or out of the house. This means that Nick and Katrina have no option but to stay in the infamous haunted property with their camera man Rob Saffi. 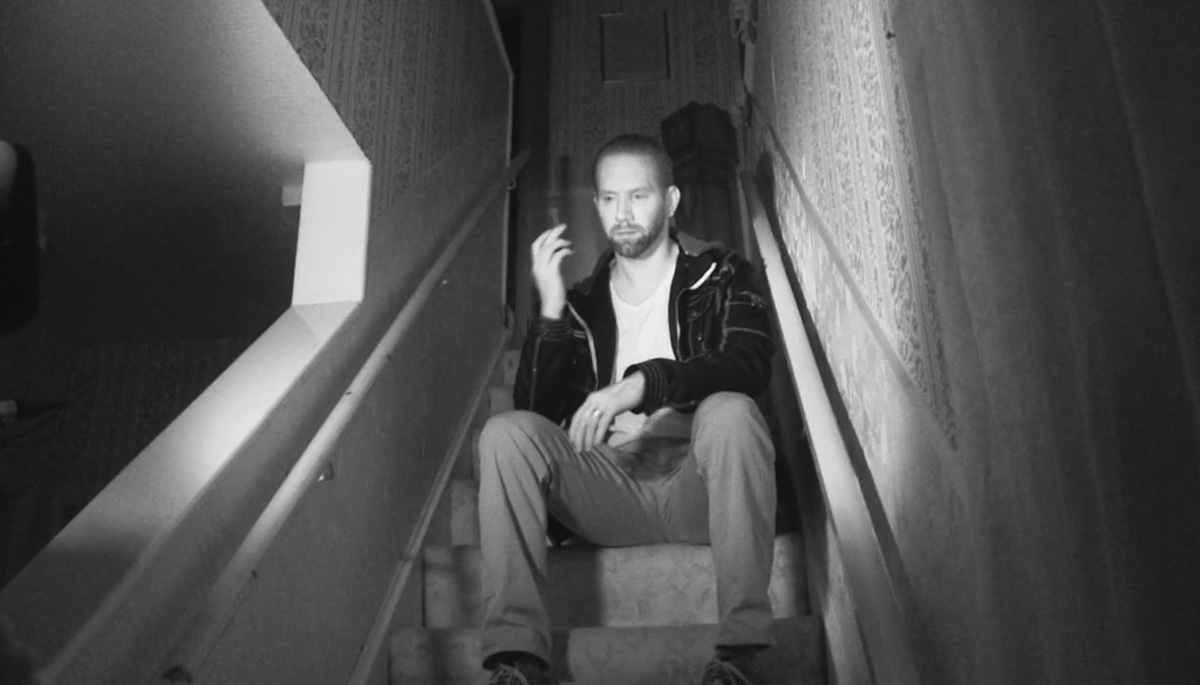 Their first night in the house was pretty uneventful, Nick conducted a brief spirit box session on the stairs and obtained a few garbled and unclear responses, then they went to bed. Nick was disturbed in the night while sleeping on the sofa when the door to the living room seemingly opened on its own.
The next day Nick placed a ball on the floor in one of the bedrooms and called out, "can you roll this ball for us, so the cameras can see it" The ball visibly moves seemingly on request. It moves quite a distance despite bing a a flat carpeted floor. It was a very interesting piece of evidence that happened on request, but unfortunately we don't see them try to replicate it or encourage the entity to do it again.
Later that day while filming upstairs, Nick said he felt something hit him and moments later Rob stood on what might have been responsible, a marble. Katrina said this was "classic poltergeist activity," which perhaps indicates that they're not dealing with a demon after all, or are there multiple entities in the house?
The next day they heard a sound coming from the hallway and went to investigate and found a knife on the stairs. Katrina said the knife had been on a ledge at the top of the stairs, which is odd. Why would a knife be on the landing? This was never explained. Nick took the knife moving as a warning. As they were discussing the incident, a strange noise was captured on camera which they thought sounded like a growl.
Later another piece of great physical evidence was caught on camera. The living room door was seen to suddenly swing closed, at the same moment a dark shadow was seen to move through the part of the kitchen visible through another still-open door.
After seeing the footage, Rob said, "I've always been a skeptic, but spending the time we've spent here, there are a lot of things that have happened that I can't explain." 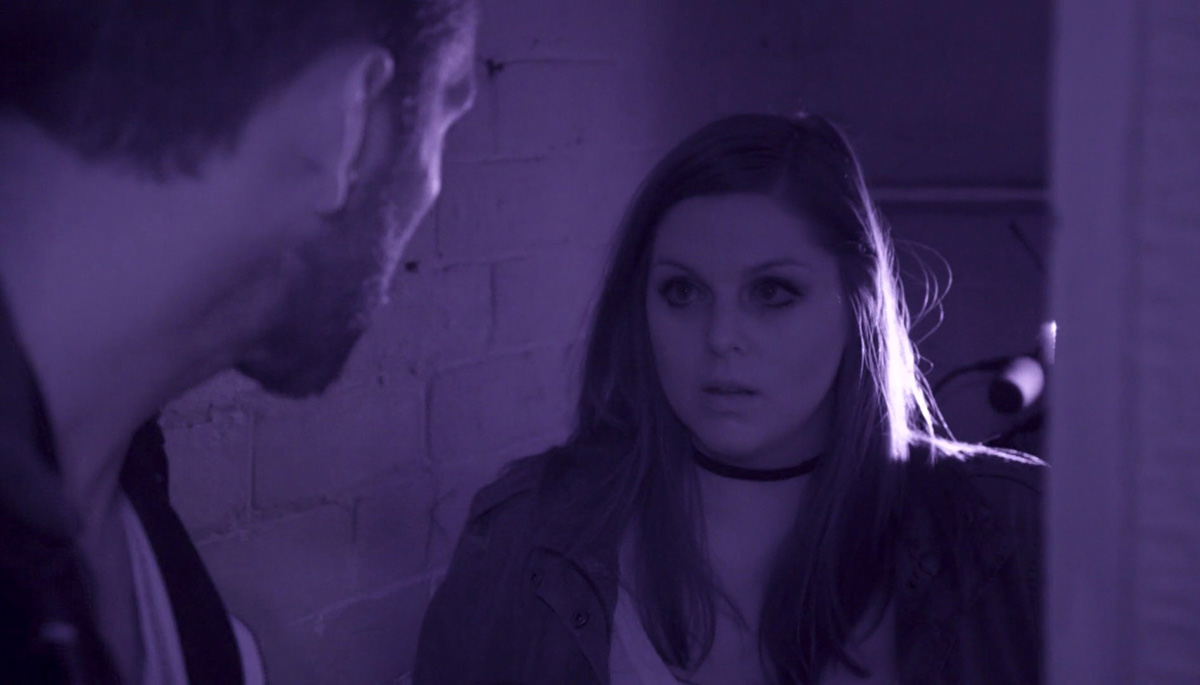 Towards the end of the episode, Nick went into the coal house, a small closet, alone. Almost straight away he felt that something stabbed his leg, so ran out and found a scratch appearing on his leg where he'd felt the pain. He bravely ventured back in the coal hole. This time the door seemed to open and close on its own behind him.
Katrina then ventured into the coal hole, and she also suffered from a similar scratch on her stomach despite the fact she was wearing two shirts.
The big scare of the episode came when the team heard a sound coming from the attic. Nick climbed up and reached for the attic hatch calling out "are you up there?". As he was about to open the hatch the grandfather clock near him at the top of the stairs fell over causing Nick to shout and immediately jump back down.
This seemed like quite a strong piece of evidence, but it was sort of glossed over in the episode. We don't see the team investigate the clock in any way in order to debunk it or validate it.

So did Nick get the answers he was searching for, the link to the Hinsdale House? Sadly not, far from it. The investigation just left the duo with more questions than answers. Throughout the investigation, they talked about demons, spirits and poltergeists, leaving it unclear what sort of supernatural entity they were even dealing with.
As their time in the house came to an end, they wanted to make sure then nothing from East Drive followed them home. Katrina told Nick how to close it down, "you want to acknowledge this thing without giving it any power, and you want to tell it 'this ends here'." She said, "you have to stand your ground and be very very firm with it."
If it's as easy as just being assertive and telling the demons to stop following you, then why didn't Nick do this when he was being bother by the demonic entity that he says was tormenting him and his family after his investigation at the Hinsdale House?
But, Nick took part in the closing ritual, calling out "you have to stay here, don't follow us." This all some what belittles what up until this point was described as a dangerous and vicious haunting if it can just be stopped by telling it to stop.
Katrina ends the process by saying, "this ends right now at 30 East Drive. No more. There is a boundary now and you cannot cross it." Moments later, Carol from next door unlocked the door and let the duo out, now without a demon in toe.
#13NightsOfFrights continues tomorrow on the Really channel with more paranormal entertainment in the run up to Halloween, with a night of special programming on Halloween night itself. You can see the full schedule of programmes here.
The Really channel broadcasts in the United Kingdom and Ireland as part of the Discovery family of channels. You can watch Really on Freeview (17), Sky (142), Virgin Media (129) and Freesat (160), plus YouView, BT TV and TalkTalk TV. Or watch previous episodes on demand on dplay.