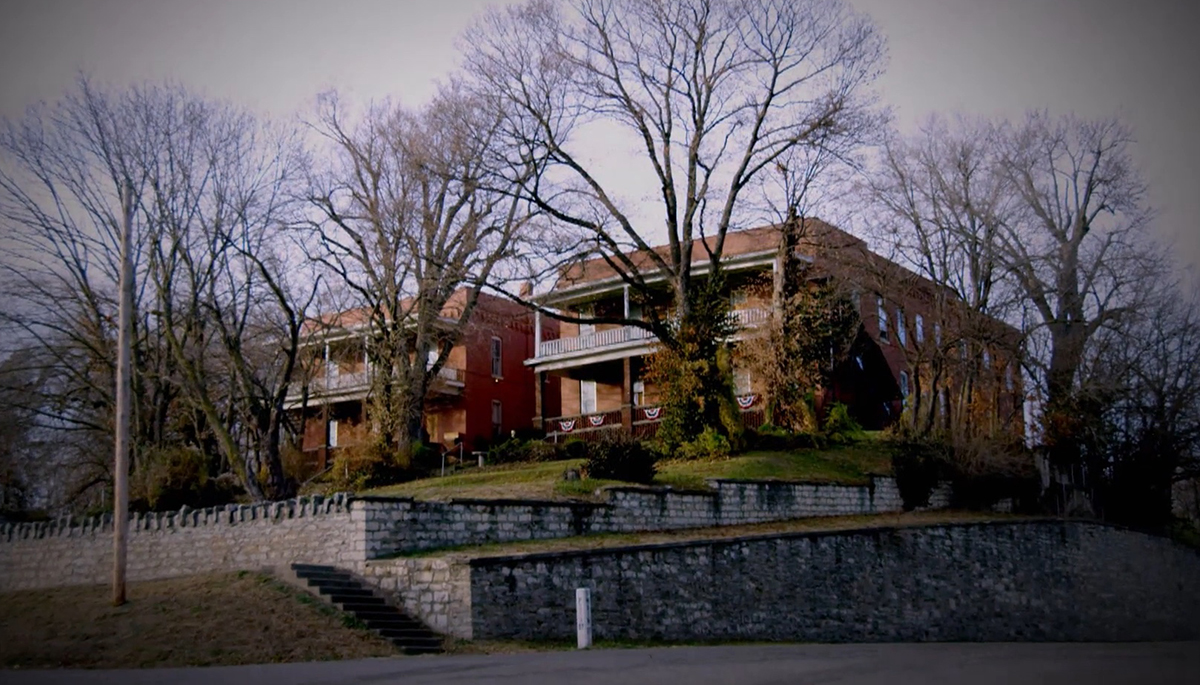 Having recently repeated the entire first two seasons of 'Paranormal Lockdown', the Really channel are now giving viewers another chance to watch Nick Groff and Katrina Weidman in the third season.
Sadly this episode of 'Paranormal Lockdown' marks the last time we'll see Nick and Katrina together after it was announced that the show was cancelled in 2019. Nick has gone on to work on his own projects and remains a prominent figure in the paranormal community, while Katrina has teamed up with Jack Osbourne for 'Portals To Hell', a similar paranormal show which is now in its second season.
So, in the final episode of 'Paranormal Lockdown' ever, Nick and Katrina attempt to track down a threatening presence that brought construction work on the Beattie Mansion to a halt.
Known to locals as the house on the hill, the Beattie Mansion looms over Main Street in St. Joseph, Missouri like a brick tomb. Armstrong Beattie and his wife Eliza built the home in 1854 and live there for the next 25 years. During this time, he served five terms as the town's mayor.
Armstrong died unexpectedly in the mansion in 1878, his grief stricken wife died in the home just two years later. The couple had no children, so the house was passed to public use. Over the next 100 years it was seemingly inhabitable as an orphan, a nursing home, and other uses, but when its current owner purchased the house in 2004, he found it impossible to renovate due to paranormal activity.
Michael Burkart claims that his contractors and caretakers left the property after hearing disembodied voices, seeing ghostly apparitions, and encountering a dark aggressive presence. Could the renovations themselves have increased the activity in the building?
Nick and Katrina have 72 hours at the Beattie Mansion to get to the bottom of this haunting, as they attempt to discover what unsettled spirits haunt the historic hall.
Speaking about the vast array of activity reported here, Nick said, "it's starting to get under my skin a little bit thinking that I'm going to be living here for the next 72 hours, and I don't really know what we're up against." 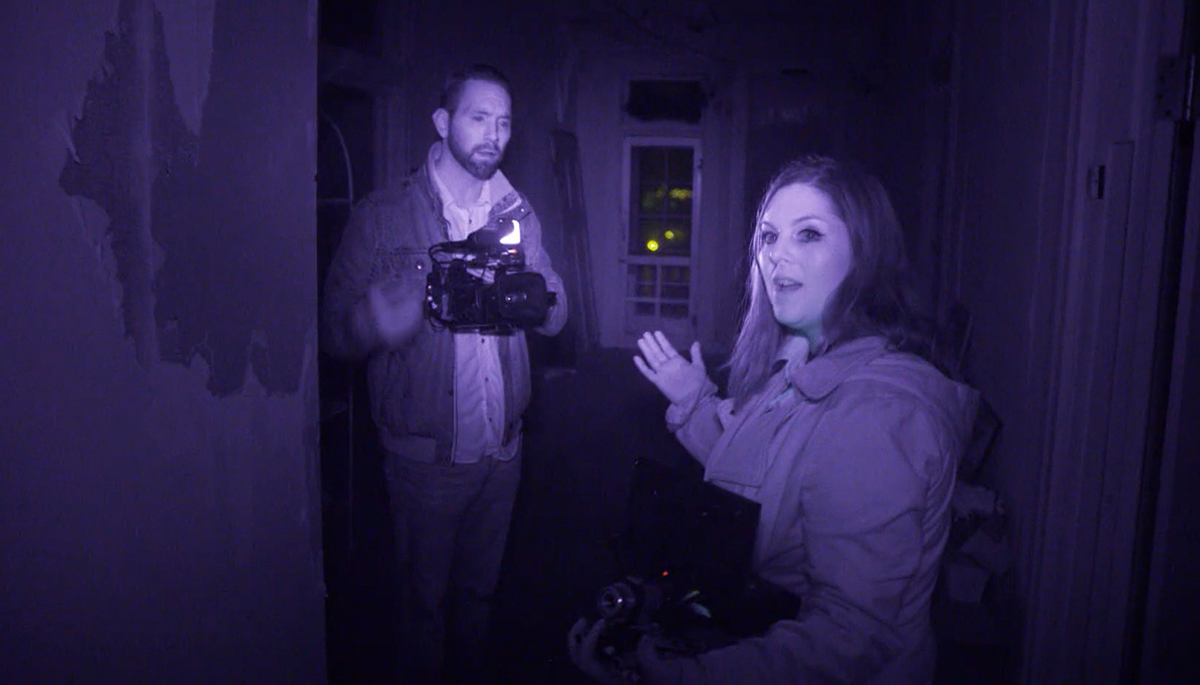 Nick and Katrina start their investigation on night one on the upper floor of the east wing. As soon as they climb the stairs Katrina says, "there's a weird feeling up here." Moments later they heard an unexplained breathy sound. Nick described the noise as sounding like a gasp.
After hearing an audible sound aloud with their own ears, Nick pulls out a ghost hunting gadget and says, "we'll try to make direct contact with the entity we just heard by running an application through an analogue radio so that the spirit can use the sound bank to speak to us." After hearing several muffled and indistinct sounds through the device, they then heard one which Nick thought said, "I'm in the cellar."
The pair acted on this and went down to the creepy basement, but perhaps the message was wrong because as soon as they were in the basement they heard footsteps coming from the floor above them. A few moments later they heard a strange dragging sound.
The investigators then decided to split up. Katrina set up her bed on the ground floor hallway where she saw a shadow figure on her initial walk around of the building earlier in the day. Nick decided to sleep on the upper floor of the east wing, but was woken up early by what sounded like a banging door. A few seconds later a door right behind him started moving on its own.
The next day they resumed their investigation in the kitchen armed with a Mel meter, which generates its own electromagnetic field. If anything enters this field the device triggers, which it did on one occasion despite no one being near it at the time. 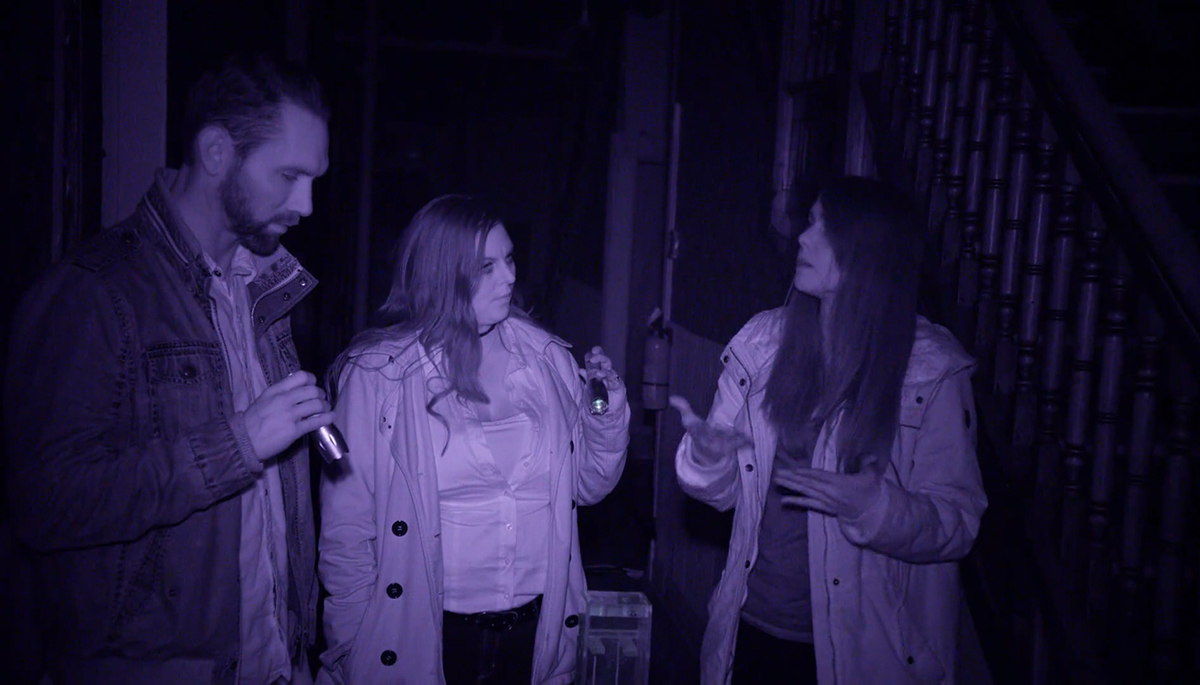 According to the property's owner, the paranormal activity intensifies during a storm. To test this theory Nick enlists the help of electrical engineer, Elizabeth Saint.
Elizabeth brings in some equipment to help simulate elements of the storm. The first piece of equipment we're introduced to is a Van Der Graaf generator. This common scientific apparatus generates static electricity, something that is common during a thunderstorm.
She's also brought along a Jacob's ladder. The impressive device produces high voltage arcs of electricity which are visible between its two large conducting antennas. This is basically producing a mini-lightning storm.
Both of these pieces of equipment generate phenomenon similar to lightning, but they kick out considerably less power than a real strike, but since the discharge is happening right in the house, the investigators hope it will have an effect on the levels of paranormal activity.
Elizabeth is also equipped with an ion motor, a device that spins when negative ions are produced. They also have a haze machine in the basement to represent clouds.
While Elizabeth ran the equipment, Nick and Karina went off to investigate upstairs using their audio communication device. As Elizabeth was turning kit on in the base room, she saw something break a laser beam filtering through the induced fog in the basement. The movement was clear to see and very interesting.
Nick and Katrina went to investigate and almost straight away Nick felt something being thrown at him, the sound of it landing could be heard on camera.
It was only moments later that Elizabeth left, which was a shame. A good few minutes of the episode was spent introducing us to Elizabeth and the kit, but no sooner had she switched it on, the experiment ended. The object being thrown seemed like a positive start, but it seems nothing further happened as a result of the experiment. We didn't even get to see the Van Der Graaf, the Jacob's ladder or the ion motor in action. Soon after this Nick and Katrina found spots to sleep for the night and the second day of the investigation came to an end.
On their final night in the house, Nick hopes to find out who or what is haunting the Beattie Mansion. They started out using an SLS camera in the basement. This is a special type of camera that uses 3D mapping technology to detect human-like shapes in the darkness, it highlights them on its screen in the form of a stick figure.
On this occasion rather than showing a figure, it showed a contorted glitching shape near Nick. As Nick moved his hand through the invisible mass next to him his movement seemed to change the shape and Nick felt as if he was touching something unseen, an experience he described as "so f**king scary."
They end their investigation on the upper floor hallway, once again using the SLS camera and a collection of sensitive microphones in an attempt to capture any audible spirit sounds. Like the other experiments featured in the episode, after talking us through the set up, we never hear about any result it obtained.
The ghost hunting gadget they were using made a sound which they thought sounded like the name Eliza, which could relate to one of the home's former residents giving Nick the answer he was hoping for on their final day.
Camera man Rob Saffi then saw something move on camera behind Nick and Katrina. The footage is interesting and does show movement at the end of the hallway, but it's not possible to make out any kind of shape or form.
This episode is the last in the season, but you can watch back all three seasons as well as 'Paranormal Lockdown UK' on Discovery+. The paranormal entertainment continues next week with more ghost hunting shows from Really as part of the channel's #Freakend event, bringing viewers three nights of paranormal entertainment every Thursday, Friday and Saturday.
You can watch in the United Kingdom and Ireland as part of the Discovery family of channels. You can watch Really on Freeview (17), Sky (142), Virgin Media (129) and Freesat (160), plus YouView, BT TV and TalkTalk TV. Or watch previous episodes on demand on Discovery+.