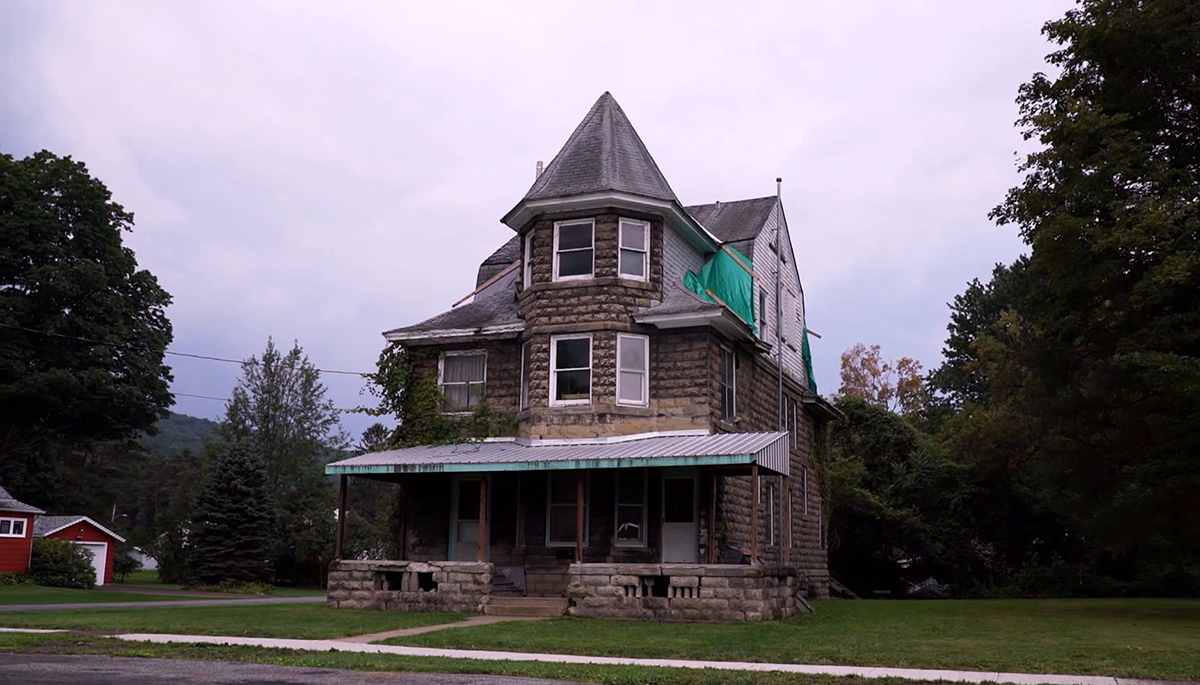 Having recently repeated the entire first two seasons of 'Paranormal Lockdown', the Really channel are now giving viewers another chance to watch Nick Groff and Katrina Weidman in the third season.
In episode two Nick and Katrina visit Wildwood Sanitarium in New York where tenants living in apartments in a converted building reported an unnerving male presence and furniture being rearranged.
The sanitarium in Salamanca, New York, may appear to be nothing more than a decrepit home on the outskirts of town, but inside the history and horrors of the old building are still very much alive. Dr. James Henderson built the sanitarium in 1900. He believed that self regulation and a balanced body and mind could cure tuberculosis, addiction and other illnesses.
After his death in 1943, the house of healing was immediately converted into apartments, subdividing the airy spaces into individual units. However it's said that the former residents of the sanitarium, who have long since passed, didn't take kindly to the construction. A negative energy in the building forced tenants to leave.
Nick and Katrina will spend 72 hours locked inside the relatively small former sanitarium where they will try to get to the bottom of who or what is haunting the building. 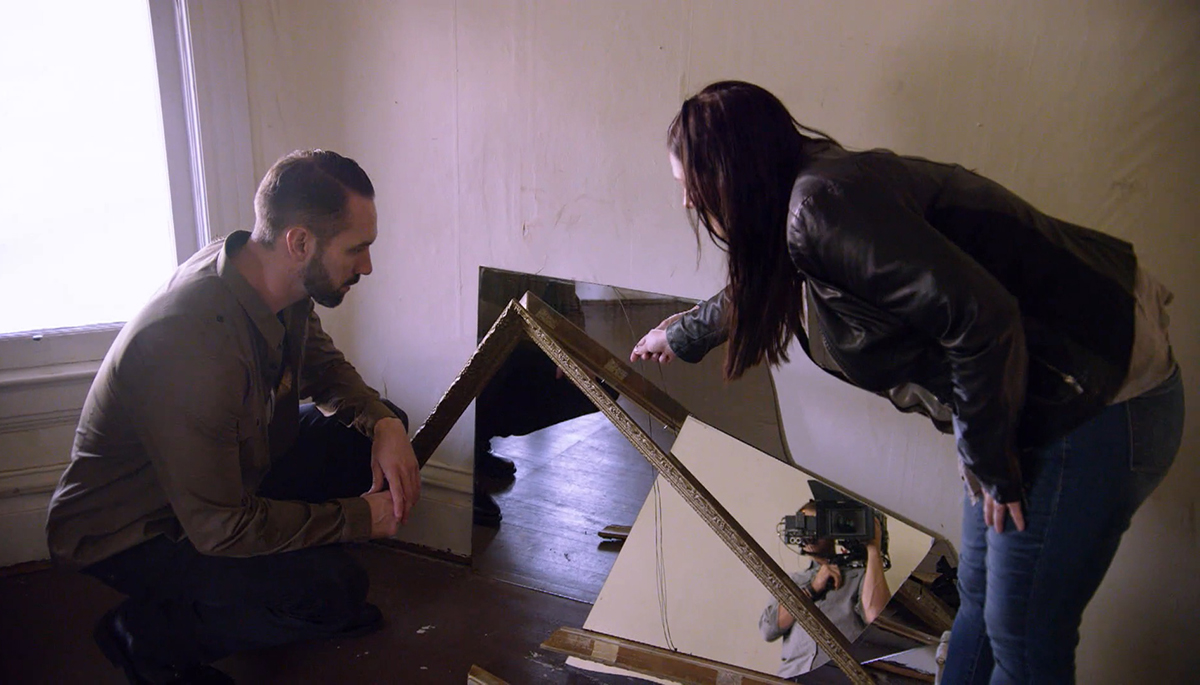 Before their investigation even got underway, something major happened in the house. While Nick and Katrina were talking to the owners outside they heard a crash from inside. They ran back into the house and found that one of the mirrors had fallen off of the floor. Nick says, "this is one of the largest things that I've actually seen move in a haunting."
Because the house was littered with mirrors left behind by previous owners, Nick hung another mirror on the same spot on the wall to see if the mirror would fall again. The original mirror was hung with two screws, one of which came out of the wall on the previous incident. This time the mirror is hanging just on the one remaining screw. Nick puts a motion detector on the mirror so he can tell if it moves.
Later when darkness falls and with a storm raging outside, the team switch their cameras tonight vision and begin by using a GeoBox, a device that scans through multiple frequencies of the electromagnetic spectrum, the idea is that intelligent spirits can manipulate or use the ambient EM field to relay intelligent responses in the form of words or sentences.
They wander the house with the device and receive various muffled and garbled sounds which they thought could have been spirit communication, but nothing meaningful was relayed. Moments later they saw a door slowly moving, but since the wind from the storm could be heard whistling outside during the investigation, this could well have been due to a draught.
They heard a few knocks in various places that had them running around the house, but nothing as dramatic as the mirror incident occurred again. Katrina said, "I wonder why they're not coming near us." They call it a night and Nick sets up his bed in the room where the mirror fell, while Katrina sleeps on the second floor.
The next day they continue their investigation using the GeoBox. They heard what they thought sounded like a footstep coming from above them. Nick believed the sound was coming from the attic. So he climbed up with a night vision camera for a look, but the roof space was empty. That night they found themselves back in the mirror room when Nick's motion detector he'd placed on the mirror started beeping before falling off of the mirror.
And that was it for day two, the pair set up their beds and got some sleep in separate parts of the house, but it was far from a peaceful night. Both of them heard various noises and knocks throughout the night which they could explain. 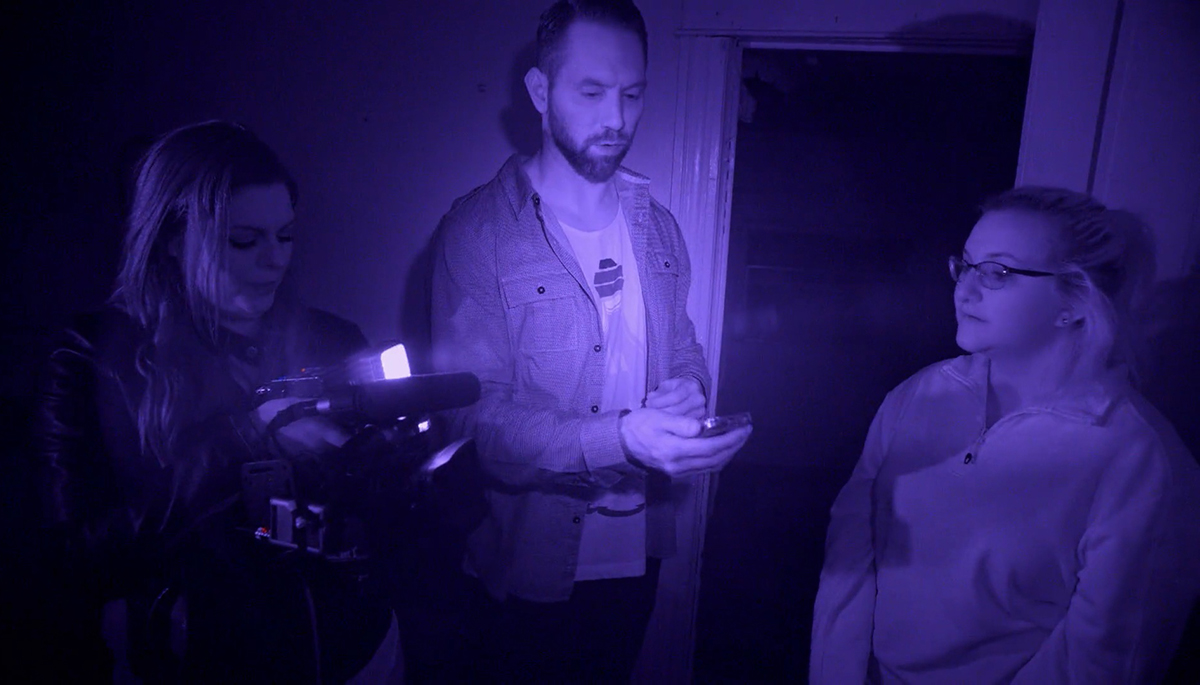 The next day Nick and Karina decide to bring in the homeowner Laurie Ann Wagatha and her daughter, Brooke. They hope that their presence might get a reaction from the spirits. The girls reported an oppressive feeling that's not normally present in the home. Using his Panasonic RR-DR60 audio recorder, Nick tried to communicate with the spirits. He captured several noises which he thought might have been voices leading him once again to the attic.
Later with the residents gone, Nick said, "the house feels so charged after they were in here and I think it's a perfect time to continue our investigation." For their final night they focussed on the two upper floors and the attic. They had microphone set up in various locations including the attic itself.
They had a strange laser contraption that rotates if something gets close to it. Nick said, "if anything crosses these laser beams, then it's going to rotate 45 degrees to the quartz crystal right here and it's going to begin to heat up and produce energy." Nick says this energy will help a spirit manifest or communicate via the microphones. It's a bit strange, since the laser will already be releasing energy into the room without it being focussed on the quartz. Also, why not simply shine the laser at a crystal rather than having the convoluted rotating laser element?
The investigators heard a couple of interesting sounds through their devices, but nothing conclusive that gave them any answers.
'Paranormal Lockdown US' continues next week on Really as part of the channel's #Freakend event, bringing viewers three nights of paranormal entertainment every Thursday, Friday and Saturday.
You can watch in the United Kingdom and Ireland as part of the Discovery family of channels. You can watch Really on Freeview (17), Sky (142), Virgin Media (129) and Freesat (160), plus YouView, BT TV and TalkTalk TV. Or watch previous episodes on demand on Discovery+.