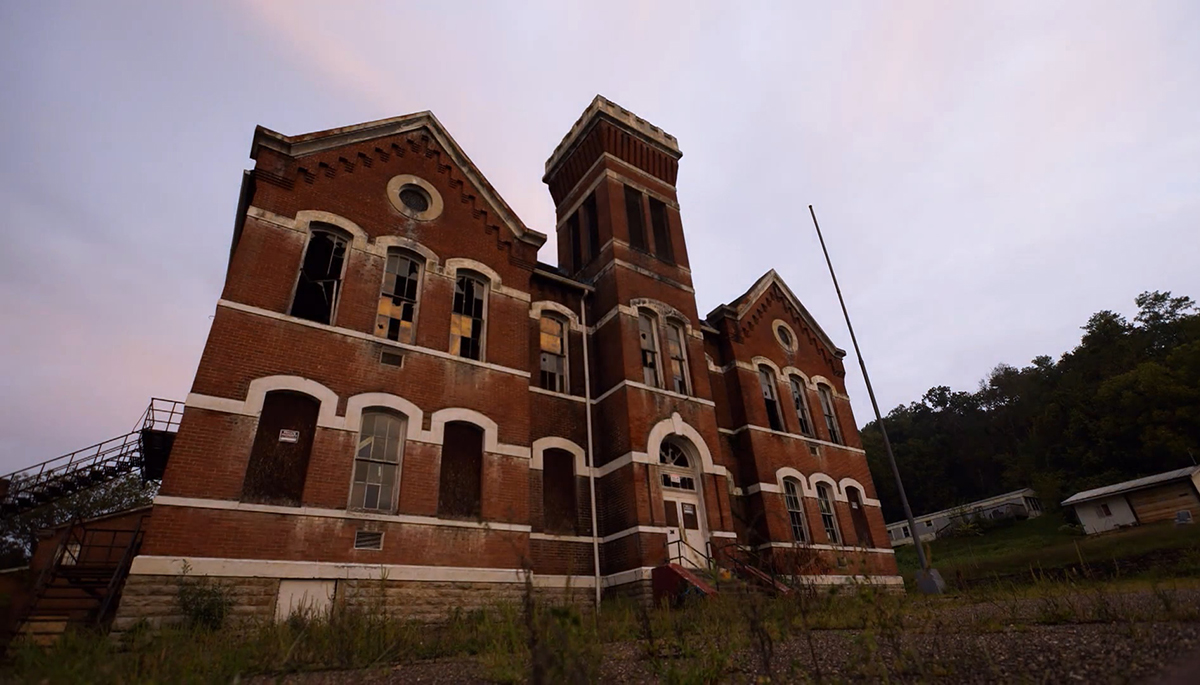 Having recently repeated the entire first two seasons of 'Paranormal Lockdown', the Really channel are now giving viewers another chance to watch Nick Groff and Katrina Weidman in the third season.
In episode three the investigators go on the hunt for a spirit that is said to lurk in the empty hallways of Ohio's Higginsport School. The case leaves Nick and Katrina wondering if this could be evidence of a darker haunting caused by recent deaths on the property.
The school sits along the northern banks of the Ohio River, abandoned since 1987. It was built in 1880 and at the time students and faculty spoke fondly of their time there, but whispers of spirits have echoed since the very first bell. Many report phantom footsteps in the gymnasium and shadow figures spotted throughout the empty halls. There has also been reports of slamming doors, children's voices have been heard, and full-bodied apparitions have even been seen.
Recent events may be sparking a darker presence. In the 18 months before Nick and Katrina's visit, six bodies had been found on the Higginsport school property, all victims of drug overdoses.
With the recent spike in aggressive appearances, the property's current owner have called in Nick and Katrina to determine what has caused this surge of negative hauntings, and restore peace to the historic building.
Upon walking into the property, Nick described the building as "disturbing." He said, "when you think about a school, you think of a happy place, but this is a location that is extremely dark now." 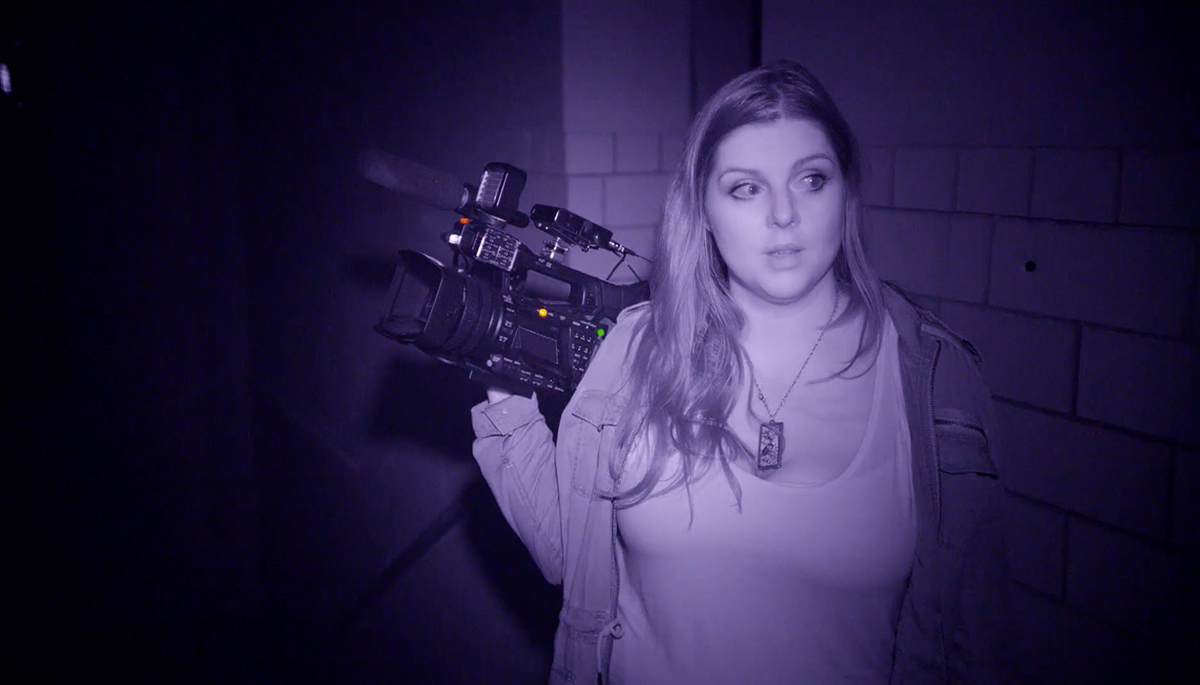 With cameras rigged throughout the whole building, Nick and Katrina started their investigation when straight away Nick heard the sound of footsteps coming from upstairs. A little while later they heard the gym door slam downstairs and went to investigate, this was followed by what they thought was the sound of muffled disembodied voices and more footsteps.
Katrina said they haven't had a first night of investigation this active in a long time, she says "it never happens like this." Before they called it a night they discovered that the same door had opened again after Katrina shut it the first time it banged open.
Noises kept Nick awake all night, so he return to bed in the day to prepare for the evening investigation. Meanwhile, Katrina went to investigate the old cafeteria alone. She was using a Panasonic RR-DR60 audio recorder to attempt to capture spirit voices. She did seem to capture some odd sounds in the recording in response to her questions, but it wasn't clear what was being said. Later she played the audio back to Nick, but while they were listening what sounded like a man moaning was heard, but not in the recording, coming from the room they were in.
As darkness fell they continue their investigation using a GeoBox, a device that scans through multiple frequencies of the electromagnetic spectrum, the idea is that intelligent spirits can manipulate or use the ambient EM field to relay intelligent responses in the form of words or sentences, but they continued to hear odd sounds like a school desk being dragged without the need of the audio device.
They continued to hear and capture more strange sounds on camera, including what seemed to be responsive knocks and even the sound of children's voices. Later they went back to the gym where they set up some motion-detecting light panels on the stage. At one point while calling out to the spirits, the panel did start to light up. That night Nick decided to sleep in the gym, while Katrina set up her bed in the cafeteria. 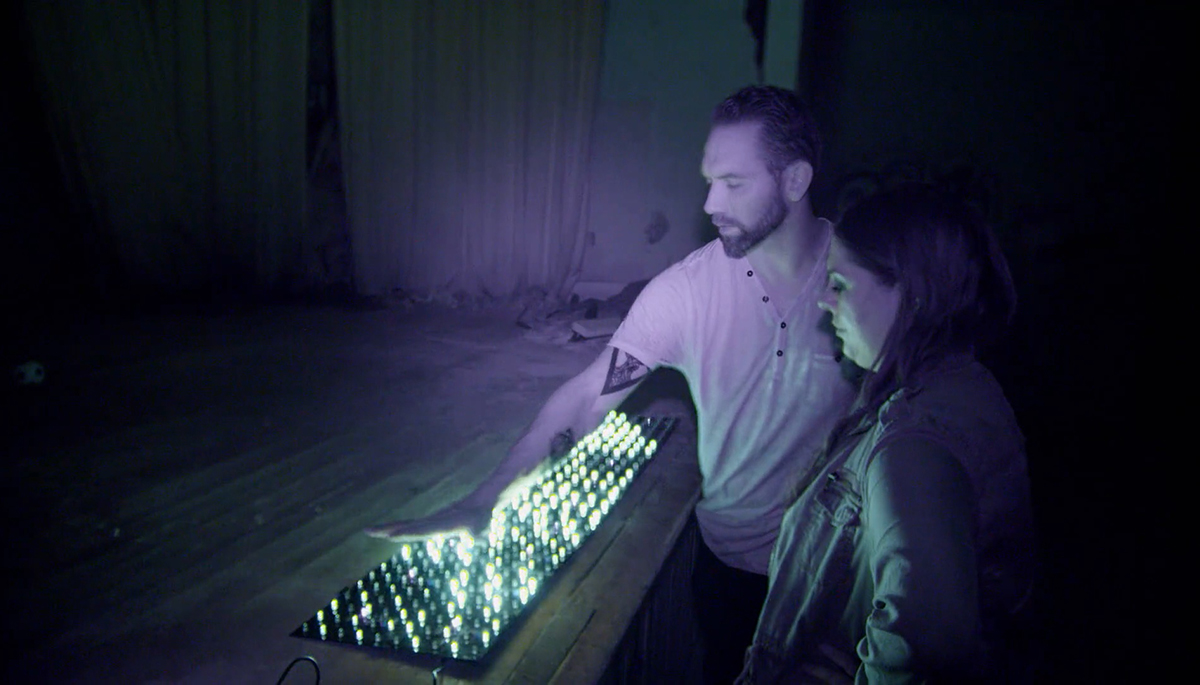 The next day they continue their investigation using the GeoBox. They got some indistinct sounds through which they thought might be an indication to return to the gym that night. They set up an elaborate experiment there using an SLS camera, a special type of camera that uses 3D mapping technology to detect human-like shapes in the darkness, it highlights them on its screen in the form of a stick figure. The output from the camera was projected on the curtains at the back of the stage.
They also had the motion-sensing light panels set up again. The panels seemed to light up again in a responsive way to Katrina's questions. Moments later Nick thought he saw a shadow to the side of the stage. A few seconds later the same thing happened again and this time Katrina thought she saw it too.
Nick and Katrina had set out to determine what has caused this surge of negative hauntings at Higginsport School, and restore peace to the historic building. Although they didn't find the answers they were looking for or attempt to bring about calm in the building, they did have a very active investigation that was plagued by lots of strange sounds, although nothing seemed particularly aggressive after all.
'Paranormal Lockdown US' continues next week on Really as part of the channel's #Freakend event, bringing viewers three nights of paranormal entertainment every Thursday, Friday and Saturday.
You can watch in the United Kingdom and Ireland as part of the Discovery family of channels. You can watch Really on Freeview (17), Sky (142), Virgin Media (129) and Freesat (160), plus YouView, BT TV and TalkTalk TV. Or watch previous episodes on demand on Discovery+.