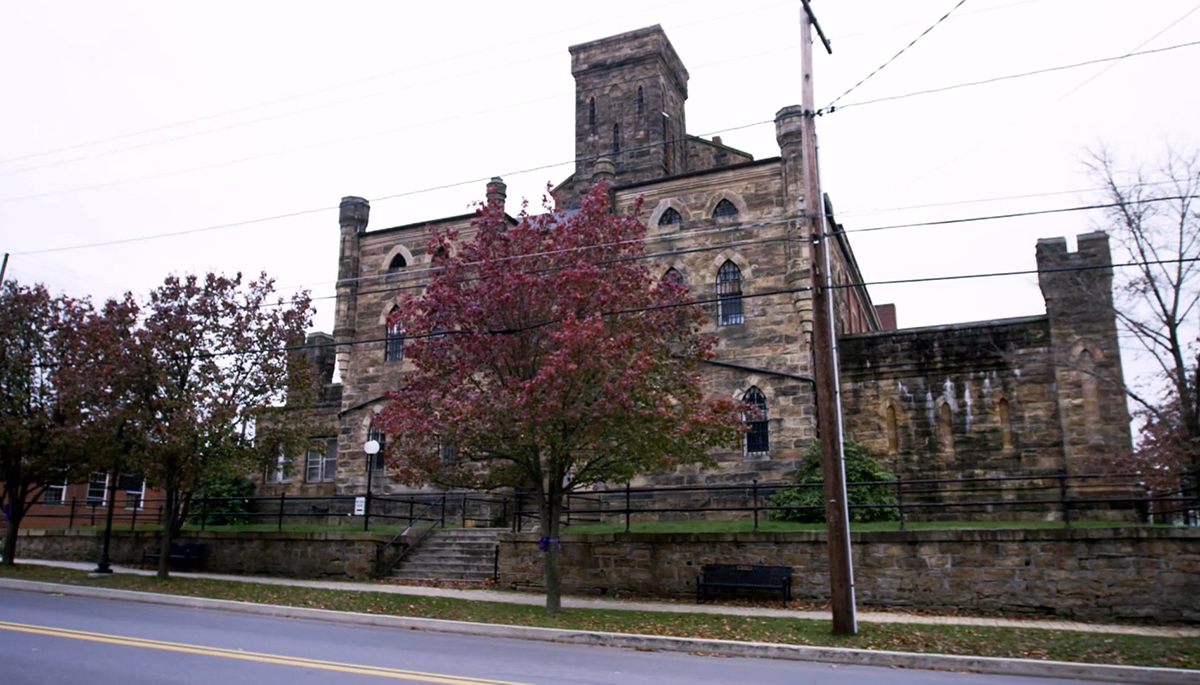 Having recently repeated the entire first two seasons of 'Paranormal Lockdown', the Really channel are now giving viewers another chance to watch Nick Groff and Katrina Weidman in the third season.
In episode seven the investigators take on the Cambria County Jail in Pennsylvania, which once housed the area's most notorious criminals, a place of misery, incarceration and execution.
The old Cambria county jail is a gothic style fortress of solid sandstone and iron in downtown Ebensburg, Pennsylvania. It was built in 1872 and housed the county's worst criminals within its towering walls for 127 years. Reports from former guards and inmates suggest that the prison could be haunted. In the early days of the jail, those condemned to death were hanged on the courtyard gallows as locals gathered to watch.
Nick and Katrina will spend 72 hours locked inside the imposing building which saw its last prisoner leave in 1999. The pair are the first and last paranormal investigators to tackle this mammoth paranormal case.
Katrina said, "one of the biggest challenges we have for investigating here for 72 hours is that we are the first people to come in here and look for ghosts, so we're really starting with a blank slate." Nick agreed, "through my years of investigating different prisons, it's always been challenging because you never know what you're up against."
Because the duo don't have a proper feel for the most active areas, they'll have to take in as much of the huge building as they can and work this out for themselves. 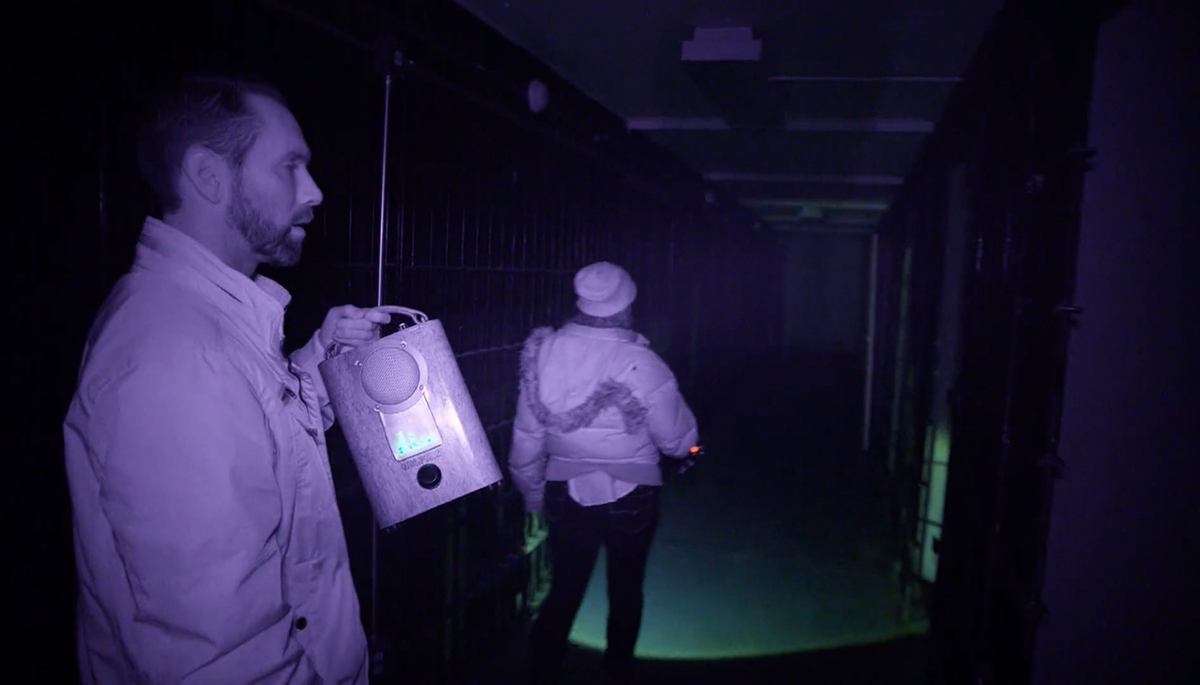 Nick and Katrina started their investigation in the old wing, where dark figures have been seen, strange sounds including disembodied voices have been heard, and footsteps have echoed from the upper landings. This part of the building also housed the women's wing where something has been heard running through the dormitory, but never seen. The pair were armed with a GeoPort, a device which monitors vibrations, radio waves and electromagnetic frequencies. It's thought that intelligent spirits can manipulate or use the device's sensors to relay intelligent responses in the form of words or phrases.
After walking through the old wing and the women's dormitory where they heard the distant bang of a slamming door, the pair find themselves in an old cell, its most famous inmate was a man name Michael "Smitty" Smith who is said to have vanished from the cell the night before his execution. In this room Nick asked whose cell it was, a muffled sound which responded through the device was interpreted as "mine" by the investigators.
Later in the new cell block, Nick and Katrina thought a sound through the GeoPort was a voice saying "seventh tier," according to Nick this is what they used to call part of this cell block, so the duo went there to try to uncover more. They walked along a row of abandoned, darkened cells until something gave them a sign to enter a cell, but nothing did.
Nick set up his bed at the top of the new cell building, in the spot where a figure has been seen by guards who vanishes when approached. Meanwhile, Katrina made her bed in the female area of the old wing.
The next morning camera man Rob Saffi arrived with coffee and supplies for the investigators. While they're eating their bagels they hear an unexpected loud crash. The rest of the day seemed uneventful, but that night the investigators head back up to the top of the new wing where they were using an SLS camera. This is a special type of camera that uses 3D mapping technology to detect human-like shapes in the darkness, it highlights them on its screen in the form of a stick figure.
Despite setting up an elaborate experiment with the SLS camera and the projector, the duo didn't stay there long as they believed sounds coming through the GeoPort was Smitty communicating with them. They thought he said the words "down" and "dungeon" when Nick questioned the spirit about where in the prison he was.
This lead Nick and Katrina down to the basement, a grim subterranean dungeon accessible via a trapdoor in the warden's office where inmates were punished. While in this area Rob received a fright when he felt an unseen force touch him in the darkness. Moments later the team heard a faint growl coming from one of the empty cells. 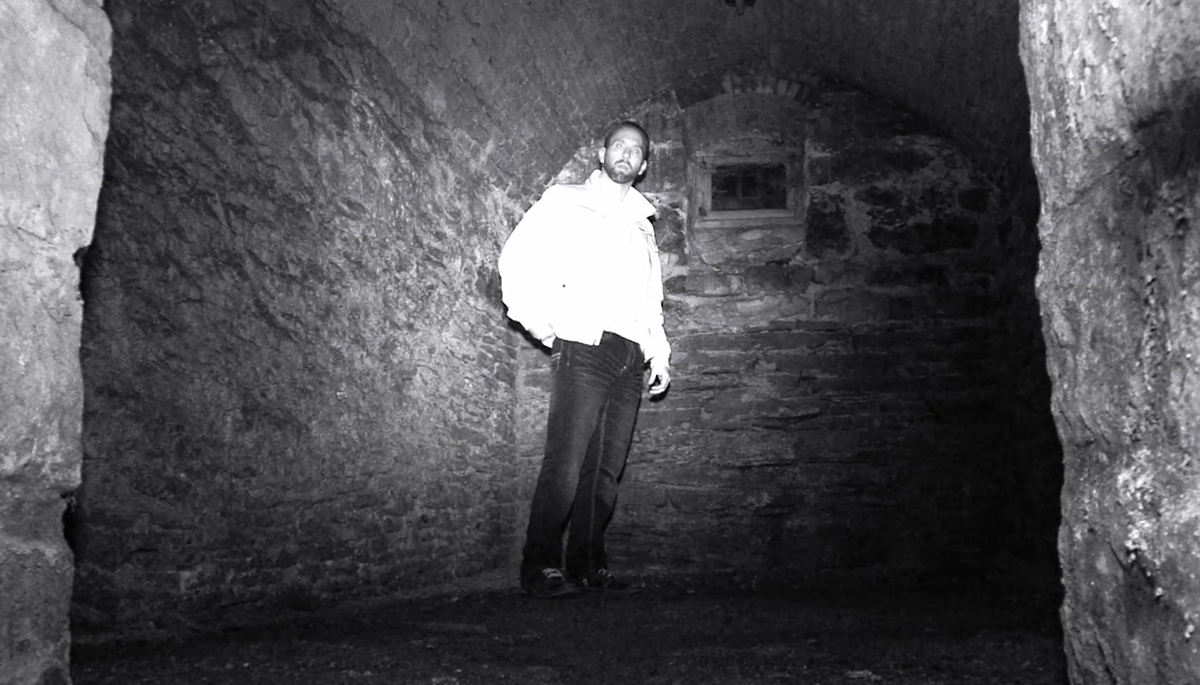 After Rob leaves them for the night, Nick and Katrina split up. Katrina went to Smitty's cell, but this part of the old jail proved to be quiet. Meanwhile, Nick stayed in the basement, where he heard more growls, disembodied voices and the sound of movement all around him. Nick then turned off his night vision on his camera to show viewers at home how dark it was, at this moment he said he saw a figure walk right past him. The figure was illuminated by the screen on his camera.
Upon reviewing the footage, Nick said he could see the mysterious face he'd seen capture by the camera. We're then shown the moment slowed down. The shot is completely dark apart from an area of light patches to the right of the screen that Nick thought was a face. Nick called the clip amazing and said, "I can't believe we actually captured something that validated my own personal experience."
Based on what he perceived to be strong evidence captured in this part of the jail, Nick decided to sleep there for the night, while Katrina opted to sleep in Smitty's cell.
The next day back down in the dungeon, Katrina started to hear strange moans, this lead her to conclude that the area is very haunted.
That night in the new cell block, they tried to get to the bottom of who haunts the prison. So once again they set up their SLS camera and a projector connected to a visual device designed to aid spirit communication in the hope of capturing some visual evidence.
They were also running the GeoPort, which once again distracted them from their experiment when they heard what they thought was a voice saying "dungeon," so they relocated the experiment down to the basement to continue. The investigation ended with several more indistinct noises through the GeoPort caught in the basement, which the investigators believe were confirmation that the old jail is haunted.
'Paranormal Lockdown US' continues next week on Really as part of the channel's #Freakend event, bringing viewers three nights of paranormal entertainment every Thursday, Friday and Saturday.
You can watch in the United Kingdom and Ireland as part of the Discovery family of channels. You can watch Really on Freeview (17), Sky (142), Virgin Media (129) and Freesat (160), plus YouView, BT TV and TalkTalk TV. Or watch previous episodes on demand on Discovery+.