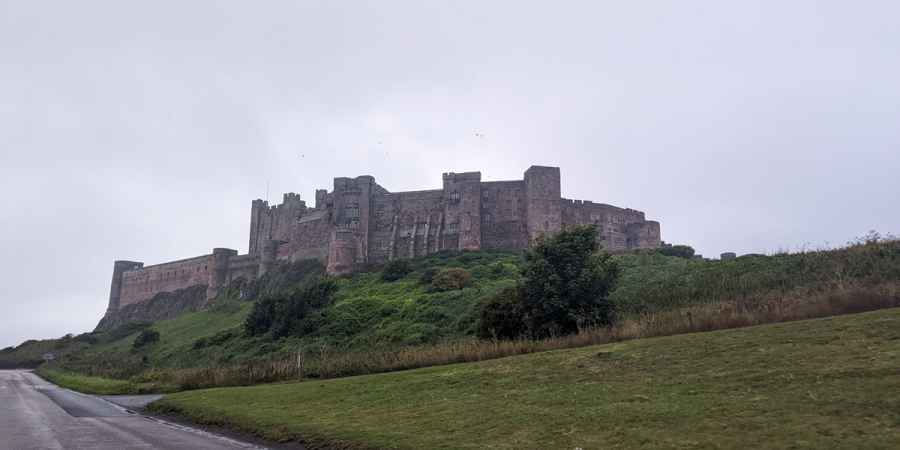 Bamburgh Castle is a stunning Grade I listed castle, situated on the picturesque coast of Northumberland. It's arguably the most stunning and imposing castle in Britain.

The castle is believed to be haunted by the Pink Lady, in life a royal princess who fell in love with a man who her father didn't approve of. He ordered the man to travel across the seas for seven years, if he came back still single, then he could marry his daughter.
The princess sunk in to depression year-by-year until the King became desperate, he told the princess that his spies had found her lover and he was happily married in another land. To cheer her up he bought her a new dress in her favourite colour, pink.
It was this pink dress that she was wearing when she threw her self to her death from the castle wall, not long after her man returned, still single.
It's said that once every seven years the ghost can be seen at the castle wearing pink, wandering the corridors before following the path to the beach where she would stand and look out to sea.
There are many regular hauntings at the castle, including Green Jane, the ghost of a young lady who lived in the village. In life she was sent to the castle, baby in arms, to beg for food by her family. On one visit to the castle she lost her footing after being turned away by the castle guards, she died after falling down some steps and it's on these steps where her ghost is seen today.
There's also regular sighting of the ghost of Dr John Sharp who worked on restoring the castle in the 18th century, it's said he still cares for the castle after his death.
Others guests to the castle have reported seeing the ghost of an ancient soldier and hearing a piano being played when in an empty room.
Rick visited the castle during a family holiday some years ago and said he, his wife and daughter saw "a lady dressed in what they thought was a period costume (pink dress) looking out of a top floor window towards the sea as we approached the castle from the lower car park, thinking it was a tour guide in costume they thought nothing of it. My son and myself were farther back so didn't see the lady, when we entered the castle my wife spoke to the tour guide and said it was the first time she had witnessed dressed up characters at a historic site, the tour guide asked for a description of what they saw, after hearing he explained first there were no tour guides in costume and secondly nobody was allowed in that area of the castle and it was locked. He told us of the legend and my wife and daughter turned pure white. It gave us a topic of conversation for many days after."