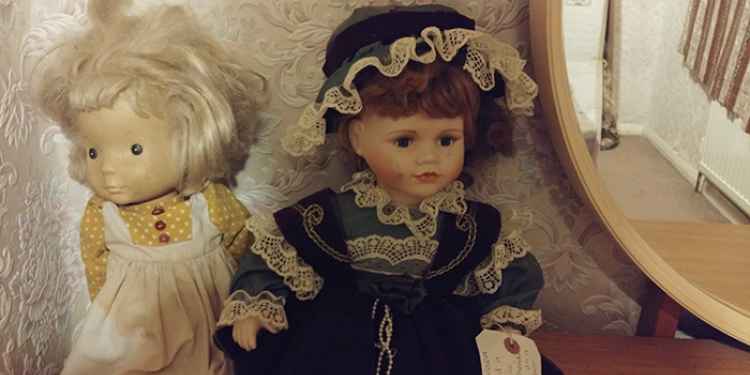 30 East Drive in Pontefract is one of the UK's most infamous haunted houses and it's once again made headlines after viewers of a ghost hunted streamed live to Facebook witness the ghost hunters terrified after a doll moved in one of the bedrooms.
Lee Roberts and Paul Stevenson had visited the house ahead of their live Halloween broadcast from 30 East Drive and captured evidence that a "dark spirit" had moved the porcelain doll, named Victoria.
The hunters were testing their live Facebook video stream in preparation for Halloween and viewers were amazed to see a doll seemingly move in between shots at the notorious house in West Yorkshire.
When the doll, first appeared on the live stream, she was clearly seen packed in its white rectangular box, partially covered by a lid.  Later in the live broadcast, the guys walked back into the room to find that not only had the doll appeared outside of her box, but the lid was also bent.
Lee told local press that "We were only testing the signal really but things just started to happen so we kept rolling."
Many believe that the poltergeist which haunts the house is the spirit of the "Black Monk of Pontefract", but Lee's not convinced, "looking at the history of the location, I don't think he was a monk."
However Lee is sure that the demonic spirit intentionally moved the doll to scare them saying that "the doll is not actually the issue, it's what is controlling the doll and making it move, that's the scary part."  Lee's reaction to the scare was captured on the live stream, saying shocked "No way! Is someone taking the piss?"
Lee later said, "I was speechless. Paul was adamant someone was playing tricks on us and wouldn't even come into the room he was so scared."
This year marks the 50th anniversary of the start of the hauntings reported by the Pritchard family at the former council house, so Lee and Paula will be streaming live video from their investigation inside the house on Halloween night.  Make sure you don't miss it by checking out the event on Facebook.
The poltergeist of 30 East Drive has been well documented over the years.  The house made national press following the Pritchard's claims of spooky goings-on, and later featured in the 2012 horror movie 'When The Lights Went Out' and was the location for Most Haunter's annual live Halloween special in 2015.  During Most Haunted's time in the house, a member of the team was seen to be dragged up the stairs (using a rope, if you look closely).
You can re-watch the live stream below and decide for yourself, did Victoria move on her own or not?