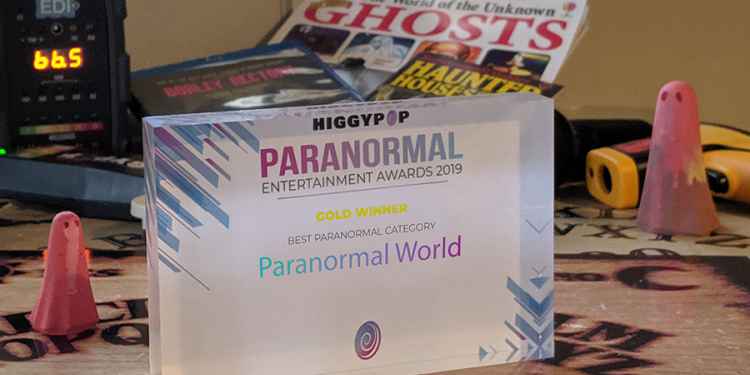 The second annual Paranormal Entertainment Awards will recognise the best paranormal content creators, publishers, hosts and broadcasters of 2019.
The winners of this year's awards will be announced on Monday 9th December, based on a public vote which will take place throughout November.
Today we are revealing the 17 categories for this year's awards, but the shortlist won't be revealed until voting opens in November.
Below are this year's Paranormal Entertainment Awards categories...

The best female paranormal investigator to appear in an programme broadcast this year.

The best male paranormal investigator to appear in an programme broadcast this year.

The best psychic medium to appear in a programme or to have toured this year.

The best supernatural movies to receive cinema release in 2019.

The best ghost hunting show to air on television worldwide in 2019.

The best factual film to be released in 2019, either digital, cinema or home release.

The best paranormal investigator to appear in original content produced for online only this year.

Best paranormal investigation team who have published original content online only this year.

Best series of original paranormal content produced for online only this year.

The best evidence of the supernatural captured by a paranormal investigation team in an programme this year.

The unrecognised paranormal investigator who's worked the hardest to further the paranormal field this year.

We want your help to compile this year's shortlist. So, we've opened up some of the categories for nominations and we need your help shaping some of the other categories' shortlists by telling us who you think deserves recognition in these categories, especially in our new Paranormal Unsung Hero category.
The big categories like Best Female Ghost Hunter, Best Male Ghost Hunter, Best Paranormal Reality Show and Best Paranormal Movie are not open to nominations. This is because the shortlists for these categories are determined by mainstream television and movie releases.
You can nominate all forms of content created from traditional broadcast, online streaming, social and print, as well as celebrating the stars and creators of that content - as long as it's paranormal.
The term "programme" in the category description can refer to either a television show, podcast episode or web series episode. The programme or work must have been released between November 1st, 2018 to October 31st, 2019. A nomination in the people categories must be someone who has featured in work published within the same time frame.
Nominations will close on October 20th and we will reveal the shortlist and open up the awards for public voting on November 1st. You can nominate right now on our 2019 awards page.
You'll be familiar with most of the categories from last year's awards, however we have introduced a couple of new ones to help less smaller content creators get the recognition they deserve alongside some of the big players in the paranormal world.
This year there are two new categories aimed at online content creators only. They are Best Online Ghost Hunter and Best Online Investigation Team. We're also asking you to pick the Best Skeptic and Best Psychic this year.
There's a new Best Paranormal Event category and we'll also be honouring this year's Best Paranormal Blogger.
If you have any suggestions for who should be in these categories, then now is the time to tell us. You can nominate here before October 20th.
Follow @higgypop on Twitter for news and updates and check back soon to vote for your favourite paranormal shows and stars.