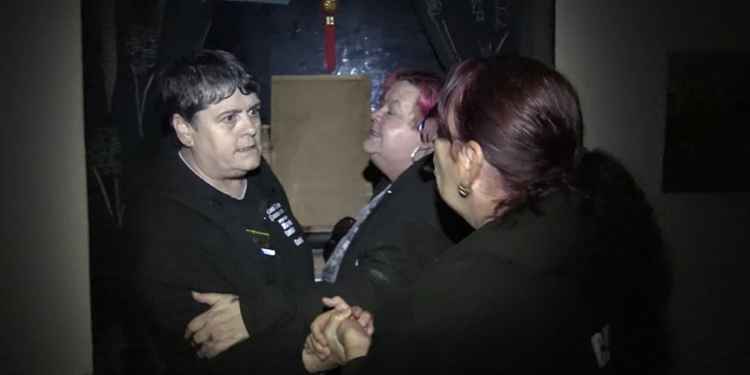 Photo: youtube.com
Ste and Griff of The Ouija Brothers are called to a house in Bolton where a family has been experiencing problems with what they think might be a demonic entity known as an incubus.
An incubus is a type of male demon that normally attacks women as they sleep, but in the case of this haunted house, it's preying on the male partner that lives there.
For this investigation The Ouija Brother teamed up with East Drive Paranormal. The investigation team, based in Pontefract, have a relatively well-known member amongst their numbers, Carol Fieldhouse.
Carol is best known for her involvement with 30 East Drive, having appeared on television shows like 'Most Haunted' and been interviewed countless times about the happenings in the famously haunted house she lives next door to.
This time Carol has gone a bit further afield and is investigating a large family home in Bolton with Ste and Griff. At one point in the investigation Carol appears to become overcome by the sinister force that's hiding within the house.
The investigation proved to be an emotional one for several members of the team, perhaps because of the house's demonic entity. Carol warns the group, "typical thing when you get an incubus, succubus or a demon - they only like to have one person they can control."
Unfortunately for Carol, it seemed she was that one person it had singled out. While upstairs towards the end of the investigation she started behaving strangely. She smiles and giggles at the rest of her team, but becomes very aggressive when they try to remove her from the room.
As her team try to help her, she shouts "get her out of my face" at one of them through gritted teeth. When she started grabbing her team member's boobs, it proved to be a little too much for Griff, who took refuge from the drama in another bedroom.
A few minutes later Carol fought the demonic infestation off and appeared to be confused about what had happened to her and had no memory of the incident.
During the investigation the Ouija Brothers experienced items being thrown and strange sounds and whistling caught on camera.
The Ouija Brothers are a small team of paranormal investigators from Wolverhampton/Walsall searching for the truth with a bit of banter along the way.
Watch more from The Ouija Brothers on YouTube
Tags:
ouija brothersparanormaltopical