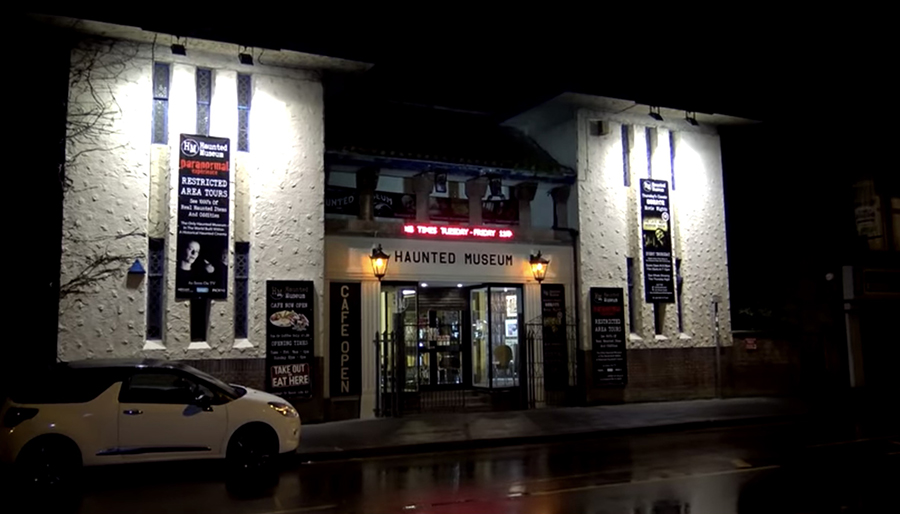 The Ouija Brothers are no strangers to paranormal investigation, but it's fair to say that the West Midlands ghost-hunting duo weren't prepared for what they encountered at one of the UK's newest haunted attractions.
Ste Richards and Jason "Griff" Griffiths from the YouTube channel, The Ouija Brothers, had set out to investigate the Old Picture House & Haunted Museum in Nottingham. The duo were a little skeptical initially about claims that the former cinema holds artefacts that have spiritual attachments, but their investigation resulted in them calling the building "the most haunted museum in the world".
It was the duo's first time at the museum on Woodborough Road, an iconic building that has many of the original features intact, and now houses various items with dark attachments, including some narrow morgue beds from the infamous and allegedly very haunted Denbigh Asylum in North Wales, a cursed dybbuk box originating from Prague, and a doll named Martha - the museum's allegedly most haunted item.
At the beginning of the investigation, they were a little unsure of what to expect. Both admitted that they weren't too convinced about the idea of haunted objects. Ste said, "we don't know the history of this place, we only know it contains haunted objects... allegedly."
Any ghost hunter will know that a paranormal investigation can sometimes mean spending hours sat in the dark, only for nothing to happen. Luckily, this wasn't the case for the Ouija Brothers on this particular night. The first part of their investigation was a little quiet, but the energy seemed to build over the night and the guys ended up experiencing so much activity that they were forced to split the investigation into two videos.
» Watch part one here
» Watch part two here

Ste and Griff's started their investigation in the main cinema room, where the duo start hearing subtle knocking and Griff reports feeling unusually angry for no particular reason. The pair familiarise themselves with the museum's exhibits, calling in on Martha, and the witch's room, where Griff admits he's a bit unsure about intruding in a practicing witch's space.
Before long Ste ends up in one of the museum's most fascinating areas, a room that has mirrors of different shapes and sizes covering every part of the walls and ceiling. The mirror room is essentially a giant version of a Devil's toy box, usually a small box that is mirrored on all of its internal faces and is used to trap or communicate with spirits.
Ste's skeptical streak continued while he was holding vigil in the mirror room, admitting "I think the mirror theory is a load of crap", but moments later he heard a very loud, unexplained crack. Then his rem pod triggered - a device triggered by static energy - started beeping and lit up.
Then Griff took over, and sat alone in the mirror room. He also heard odd knocking sounds, which seemed to be coming from the 'torture room' directly outside the room he was in. The REM-Pod also triggered a couple of times for Griff, but the activity seemed a little unresponsive. Perhaps because he was still a little bit moody, Griff said "I'm going to leave you to it, and you can use the rem pod and show us you're here."
With that he left behind a camera and the REM-Pod in the mirror room, and he walked out. The video ended with an eerie moment when the REM-Pod lit up in the empty room, then moments later the batteries in both the REM-Pod and the camera mysteriously died. Coincidence? Perhaps.
With that it seemed like the investigation was over. Ste and Griff had even called the museum's owner, Steve Wesson, to come and lock up, but as they were packing away they heard another unexplained bang - a loud one - and they had to go an investigate. What happened next spills over into the second video from the location. 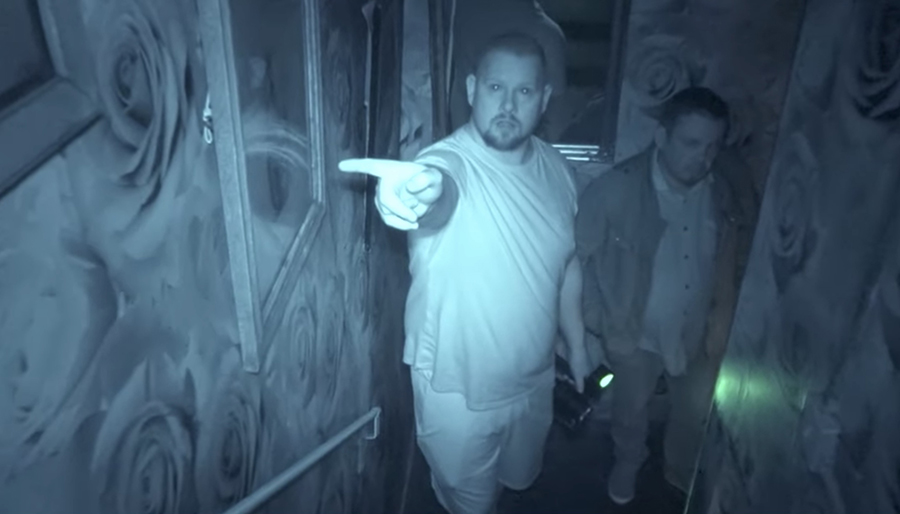 Things stepped up a notch in the second part of the investigation and Ste and Griff got more than they ever expected from the location. After the investigation, Ste posted on Facebook, "I'd gladly quit the paranormal now because I don't think anything will top the latest video I'm working on from the Haunted Museum!"
Now joined by the owner, Steve, the team found themselves in what was the old projectionist's room of the cinema. It is now made up to look like a grim torture room. It was here that things started to get interesting when they began hearing very loud sound.
The noises seemed to be coming from above them and sounded like someone moving around. Griff called out, "can you give us one last noise before we leave?" An on demand they heard a very loud dragging noise from above them, the likes of which they have never heard on an investigation before.
The incredible sound that was clearly caught on camera was like someone was dragging furniture around in an adjoining room, but the museum was empty apart from the three of them. Furthermore the museum isn't connected to any other buildings, which eliminates the possibility that it was neighbouring businesses moving heavy objects around. The sounds seemed to be coming from above them that rules out external noise from the street below.
"That was ridiculously loud," Ste excitedly shouted as they heard the sound for a second time. Steve, who obviously knows the building well said, "usually I can hear and know every creak, I've never heard that." He thought the noises were coming from the attic, so he took Ste and Griff up to investigate.
The attic is a room at the top of one of the building's towers. There's plenty of furniture in the room, including a bed, a sofa and a chest of drawers that could have been sliding around, but nothing seemed out of place and once in the room the noises stopped.
To try to get to the bottom of the sounds they headed back downstairs and found themselves outside the torture room in a particularly creepy part of the museum known as the 'couple's corridor'. It gets its name from the two old photos of a married couple that hang in the hallway. The story goes that those photos should always be facing each other - in this room, they're not.
In this gloomy corridor, which is creepy enough in the day time, they started to hear more odd noises like someone walking around in the torture room. At one point it all got a bit too much for Griff and he said, "there's someone in that room. Turn the lights on because someone's broke in or something."
However, after a search and a bit of reassurance from Steve that no one could be in there, they found that the room was indeed empty, yet once they stepped back outside into the corridor the sounds continued.
The activity seemed to respond mostly to Griff, could the spirits of the building or one haunted artefact in particular have made a connection with Griff? Could this also explain his negative mood?
It's easy to see why Ste thinks that these "dragging noises" are the best evidence they've ever got. The sounds were loud and clearly heard on camera. It couldn't just be a natural sound, like the building expanding or contracting that can sometimes explain knocks and bangs. This was a sustained dragging sound followed by the almost constant sound of someone or something moving around.
Although Ste joked about quitting the paranormal, we really hope he doesn't because this is an amazing capture that blew Ste and Griff's own expectations about the building out of the water, and we hope there's much more like this to come from the Ouija Brothers.

Watch Part One Of The Investigation

Watch Part Two Of The Investigation