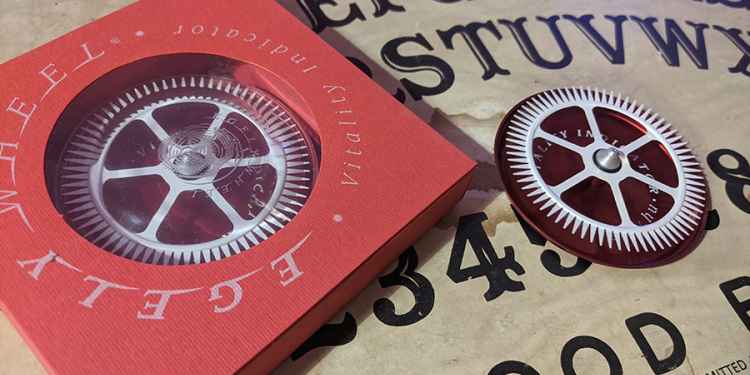 The Egely Wheel claims to be a bioenergy and life energy meter device, some say it can be used to display your telekinetic abilities, so I didn't want to waste too much on one in order to review it as that also sounds like a bit of a scam.
So, I bought one of the cheaper models to review, these Vitality Indicators sell for $50 on the company's website.
The premium version costs $189 and is basically the same thing with the addition of an array of lights. The rotation of the wheel can light up letters and spell out words, this means it's like an electronic Ouija boards, but the mechanic that feeds the electronics is the simple spinning wheel, which is the basis of both the cheaper Vitality Indicator and the full Egely Wheel.
The Vitality Indicator is well packaged, it comes in a nice presentation box. It has a metal base, so it's a little nicer than the tacky piece of plastic I was expecting, but still very overpriced for what it is. I was surprised by how light and flimsy the wheel itself is, but of course this is the secret to the device's operation.
During a paranormal investigation the idea is to get any spirits that might be present to spin the wheel. With the premium version this would allow you to spell out a word, with the cheaper version the spirits can be encouraged to spin the wheel as a sign they are there. You could also try to get them to spin the wheel clockwise to indicate 'yes', or anti-clockwise to indicate 'no'.
The problem with the wheel is that it is so light and so easy to make the wheel spin, that it is very prone to false positives. The airflow created by just walking past it can cause it to spin, and if you're too close, moving will cause it to rotate - not to mention breathing in its direction.
This makes the Egely Wheel pretty much useless outdoors as the slightest breeze will cause it to spin. Indoors it isn't much better unless you keep your distance and ensure there are no draughts at all... absolutely none.
Away from paranormal investigations you'll see people using the device by cupping their hand and placing it to the side of the wheel. Your life energy is then said to make it spin. However many people have noted that this is just caused by the air around the wheel to be warmed by your hand and spinning the wheel as it flows over it.
It's pretty easy to test that this is what is happening. You can cause the wheel to spin by placing a hot drink next to it in the right spot - and of course coffee doesn't have life energy.
Another way to test this is to fill up one paper cup with hot water and one with ice cold water. Hold on to each of the cups, one in each hand, for a few minutes until one hand is very hot and the other is very cold. Then cup each of your hands at a time around the wheel as you normally would, and you'll see that the wheel no longer spins for your cold hand, and will probably spin faster for your hot hand.
However, there is one easy way to make the Vitality Indicator suitable for paranormal investigations. The wheel comes with a clear plastic cover which clips on to the top of it and effectively and completely blocks air flow. With this transparent lid on the wheel you can still easily see if it spins, but you know it's not effected by currents in the air... however, be sure to keep it flat and still as this will also cause the wheel to spin.
Is the Egely Wheel an effective tool for paranormal investigation? Well, it's not a bad tool, as it's basically just a very light trigger object that is very easy to move. However, given the price tag, it's not really worth it. If you want a light and easy to move trigger object, build a house of cards out of some playing cards and challenge the spirits to knock it over.
Perhaps there's a little more value to the more expensive version, but I understand it's harder to cover the wheel on this version to eliminate the air flow, so you need to basically cover the whole device in a glass bowl.
Tags:
paranormalghost hunting