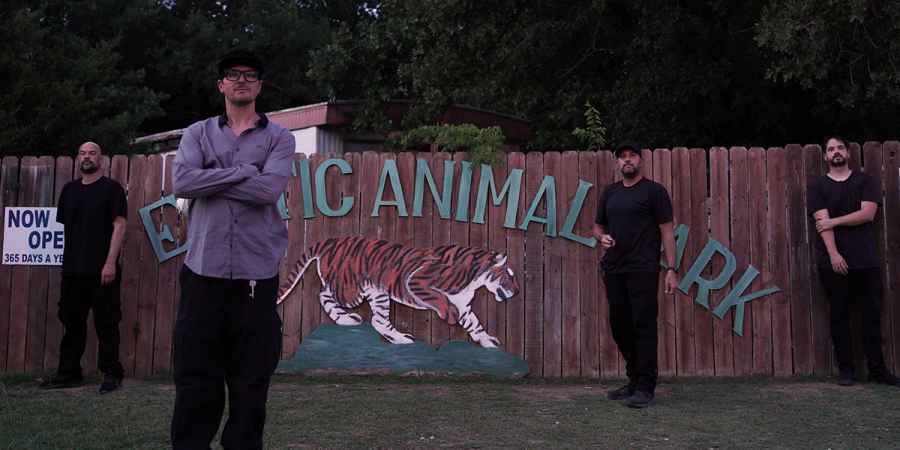 The dramatic saga of Joe Exotic and his Wynnewood, Oklahoma zoo continues thanks to Zak Bagans and the 'Ghost Adventures' crew this Halloween.
The two-hour Halloween special, 'Ghost Adventures: Horror At Joe Exotic Zoo', will premiere on Thursday, October 29 as part of the US channel's third annual "Ghostober" programming event.
Joe Exotic captivated audiences and became a global phenomenon as a result of the 2020 Netflix hit series, 'Tiger King'. Now, joined by Aaron Goodwin, Billy Tolley and Jay Wasley, Zak will once again break new ground with the first-ever paranormal investigation inside Joe Exotic's Greater Wynnewood Animal Park.
For years, the park staff have claimed the zoo is haunted. The team examines claims of sinister activity and tortured spirits believed to lurk in the shadows of a park tainted by tragic events like deadly fires and accidental shootings.
Could these incidents have opened a mysterious portal to the other side? The team is prepared to confront these dark spirits as they attempt to gather evidence as to who, or what, is haunting this park.
The Netflix series touched on speculation of murder and even floated the idea that victims might have been fed to the exotic animals kept at the exotic animal park, something its owner at the time Joe Exotic denies. The zoo is also the site of a suicide. The disturbing moment Joe's late husband, Travis Maldonado, shot himself featured in the documentary.
With so much grim history, misery and rumours of murder at the location, it seemed it was all too much for Zak and the team to stay away from and is likely to be the perfect setting for a Halloween special, given the splash the original 'Tiger King' series caused earlier this year.
There's no word as yet whether the 'Ghost Adventures' special will air in the UK over Halloween, but in recent months Travel's British sister station Really has been catching up to the US channel.
Over the last year we've seen the networks bring the premieres of new shows and episodes closer together for American and British audiences. If this trend continues into October, it could mean that British fans of the paranormal will get to see the show's special over Halloween too.

Get all the details 👇👇👇 https://t.co/TasNiOFSRi

Unlike previous years, this year's special is not live and was shot at the animal park earlier this year. After filming Zak left the ill-fated attraction with a collection of its former owner's personal possessions to add to his haunted museum.
Zak came away from the zoo with more than just ghost stories. He acquired many of Joe's prized possessions, some of which were seen on 'Tiger King'. The haul includes the original "Exotic Animal Park" sign, a section of a wall mural that is said to be marked with a bullet hole from Travis's suicide, and a glass pipe that formerly belonged to Travis.
Zak also took possession of Joe's jewelled crown, a pill bottle, items of clothing, trinkets from his many weddings, and bizarrely his penis pump.
The intimate items will feature in a 'Tiger King' exhibit at Zak's own Haunted Museum, near Charleston Boulevard and 6th Street in Vegas. The museum is already said to be packed full of so many disturbing haunted items that guests are required to sign a waiver to enter and under 16 year olds are not allowed in.
'Ghost Adventures: Horror At Joe Exotic Zoo' will air as part of Ghostober, the US Travel Channel's month-long schedule of spine-chilling programming. The television event culminates with "7 Nights Of Fright", which begins with the top 20 spookiest unexplained videos in the world with the two-hour finale of 'Paranormal Caught On Camera: Top 100' on Sunday, October 25.
The final week of shows includes a special two-hour-special featuring America's first family of darkness, the Osbournes. The family all come together to get involved with Jack Osbourne's passion for ghost hunting. In 'The Osbournes: Night of Terror' Jack takes Ozzy, Sharon and Kelly on their first ever paranormal investigation.
Then on the big night itself, Saturday, October 31, Travel Channel wraps up Ghostober with the ultimate series crossover featuring superstar paranormal investigators from two of the network's hit shows, 'Ghost Nation' and 'Kindred Spirits'. The ghost-hunting teams reunite for the first time in nearly a decade to explore frightening activity inside an illustrious Newport, Rhode Island, mansion in 'Ghost Nation: Reunion in Hell'.
The lineup also includes new 'Ghost Nation', 'Destination Fear' and 'The Holzer Files', and three brand new 'Shock Docs' specials.
Matthew Butler, general manager of the channel said, "Halloween is Travel Channel's Superbowl, and with more people at home than ever before, we plan to deliver an over-the-top slate of original programming. We are the only network super-serving this mega popular genre to its superfans, featuring the superstars of the paranormal field and beyond."
Add A Comment
Tags:
televisionzak bagansghost adventuresparanormaltopicalnetflixhalloweenhalloween 2020