GhostArk, the world's first all-in-one piece of ghost hunting kit. The device's main features are a ghost box which scan radio frequencies, EVP recorder and a loop function for creating sound traps. It also monitors atmospheric conditions such as temperature, pressure and electromagnetism. 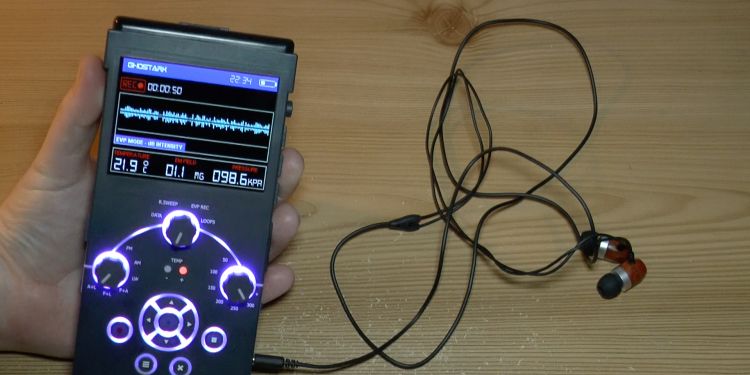 Customers were able to pre-order the device eight months before it shipped, so by the time it arrived in the hands of ghost hunters, it had become one of the most anticipated pieces of kit the paranormal world had ever seen.
Unfortunately, some customers have experienced technical issues and because of a lot of excitement and frustration from those who had pre-ordered, the device was rushed out which meant that one thing that didn't make it into the stylish white box was an instruction manual.
I've been playing around with my GhostArk, which is pretty much technical issue free, and have made a series of videos showcasing the devices main functions and controls.
GhostArk are due to send out a digital instruction manual to all customers via email newsletter soon.

How To Monitor Electromagnetic & Atmospheric Data

In this video I'll show you how use can use GhostArk's data view to monitor temperature, pressure and electromagnetic conditions. I'll also explain how the alert tones and indicators work.

How To Use The Radio Sweep Function

In this video I'll show you how to setup and record audio through GhostArk's radio sweep function. This is also known as a ghost box.

How To Use The EVP Recorder

In this video I'll show you how to use GhostArk's EVP recording function to capture electronic voice phenomenon.

How To Make A Sound Trap Using The Loop Function

In this video I'll show you how you use GhostArk's audio looping function to create a sound trap. The feature allows you to loop audio such as white noise while simultaneously recording atmospheric noise in an attempt to capture EVPs.

How To Playback Audio & Delete Files

In this video I'll talk you through one of the main pieces of functionality on the GhostArk device, the audio player. I'll show you how to use the controls to playback audio and how to delete unwanted files.

How To Use Push To Talk

A video with an overview of how to charge your GhostArk and a my opinion on what seems like excellent battery life.

Using The GhostArk Device In The Dark

Instructional video showing you how to optimise your GhostArk's setting for use in the dark.

I was still finding my way around GhostArk in this video but I share my first thought of the device as I go through the initial setup and then explore some of GhostArk's most basic controls such as accessing the settings menu, setting the time and date and switching on and off the display's lights.