If you've been following the GhostArk saga over the six months, then you'll know that despite lots of delays I received my device in February but it was far from perfect. Well today a replacement arrived and these are my honest findings. 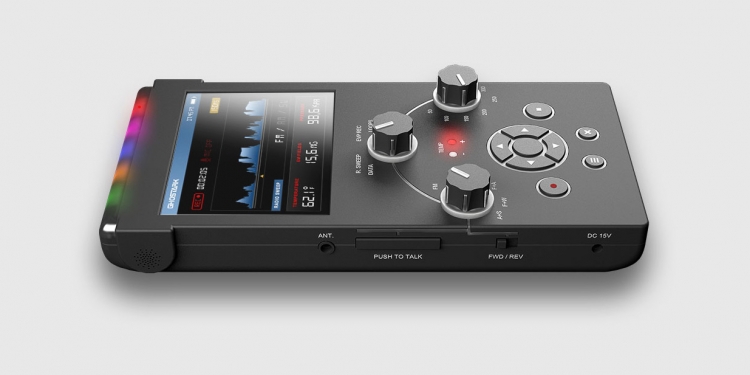 A year ago I started following the story of GhostArk. It’s designer, Massimo Rossi, envisioned an all-in-one ghost hunting device, comprising of some of the most commonly used tools in a paranormal researcher’s arsenal.
On board the device is temperature and pressure sensors, EMF meter, an audio recorder and a "ghost box" a feature which scans through the radio spectrum. When the device was first announced some followers were worried that the idea was to ambitious and packing this much into one box without the component interfering was impossible.
As a skeptic I often refer back to the old adage, "if it sounds too good to be true, it probably is" and although the GhostArk is solidly built, has a great battery life and looks very cool, packing all of these devices in to one box might have been a bit over ambitious and the first batch of products had to be recalled after customer reported multiple faults and technical issues. 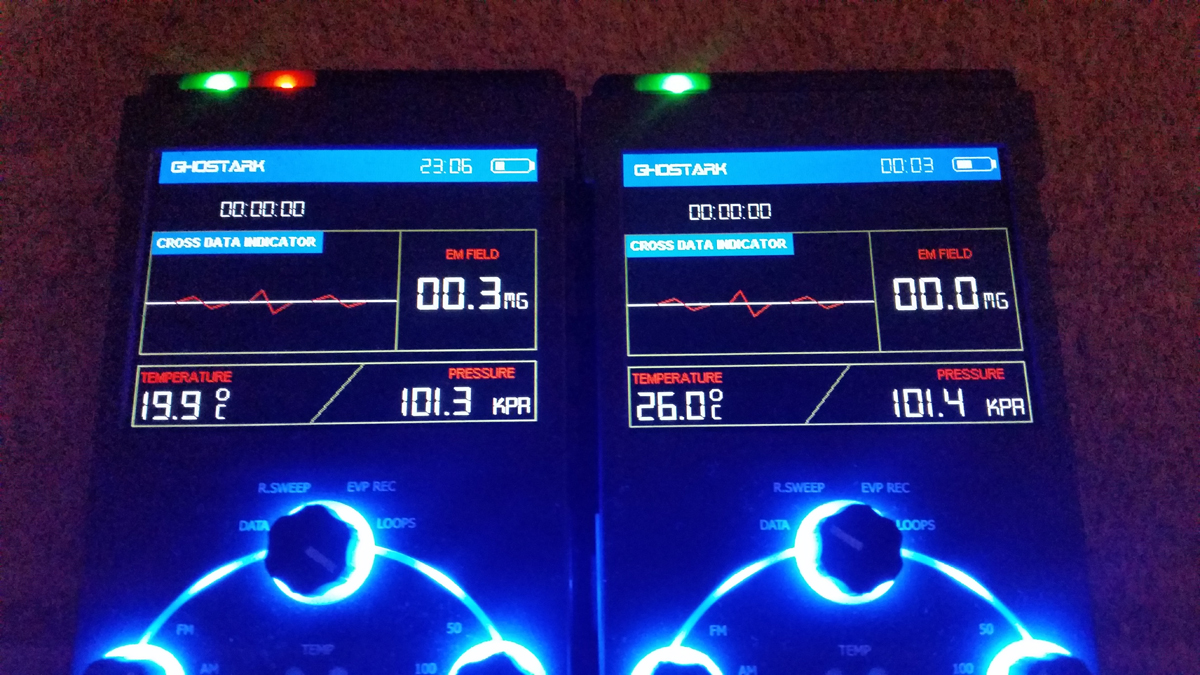 It's Not All Bad 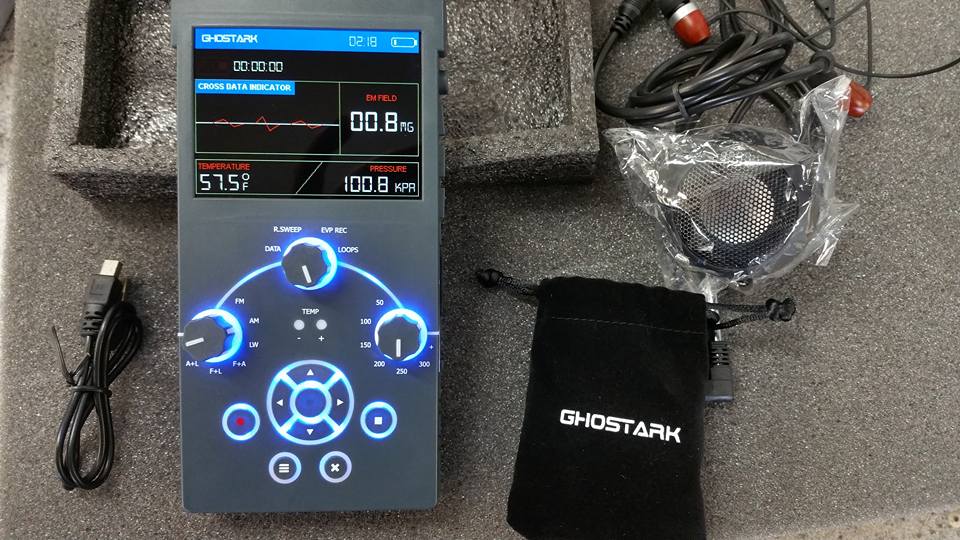 GhostArk is a very solid unit, it's perfectly sized and feels great in your hand. It's easy to switch between the main functions of the device with the simple to use function knobs.
The device looks incredibly cool, the blue lights (which can be turns on and off) give the product a very distinctive look and the LED EMF meter on the top of the device also looks awesome.
The "ghost box," EVP recorder, EMF meters and pressure sensors all work very well and the data is tracked and recorded against a time stamp. The only let down is the inaccurate temperature reading.
The battery life is really good, much better than I expected in fact. I gave the device a full charge (which admittedly did take a very long time, about 10 hours) and left it on the data view with all the lights switch on and the screen set to 75% brightness. The battery lasted for for well in excess of 10 hours. So with more vigorous I would expect that you should get around 6 to 8 hours of continuous use out of a fully charged battery.

- The device does what it says on the tin, its main functions are powerful and easy to use
- The device is well packed and comes with good quality accessories
- Aesthetically is great, the device has a cool looking design, it feels solid and is the perfect size
- Battery life is excellent but can be prolonged further by reducing the screen brightness and turning of the device's lights

- Poor after sales support. No instruction manual and no data analysis tools
- No local charger included which means extra cost for an adapter
- Internal shielding is poor which makes the temperate and possibly EMF readings unreliable (I have no way to check EMF levels on another device)
- Device doesn't have internal speakers as originally promised and audio playback is haunted by an extraneous beeping sound 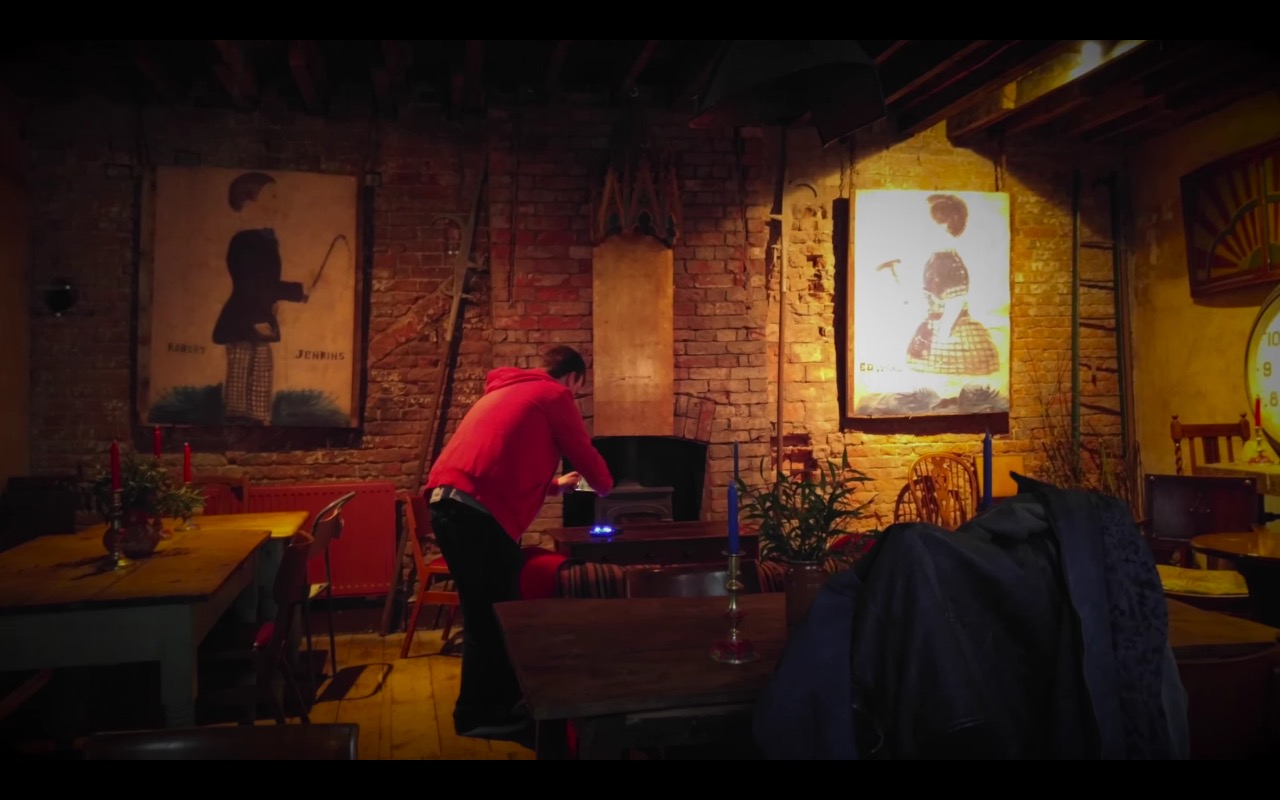 I pre-ordered a GhostArk last August and expected to receive my device by the end of the year but that date was pushed back and I eventually received my order in February. This wasn't a problem, GhostArk were quite upfront about the delays, after all it's a new product and they need to get things right before they were shipped.
But straight away it became clear that things weren't right, internal shielding wasn't the GhostArk's biggest problem, the whole device was dogged with design flaws and technical issues.
As soon as the first orders reached customers, they took to the company's Facebook page to share their dissatisfaction over the quality of the product. It certainly wasn't what people were expecting. 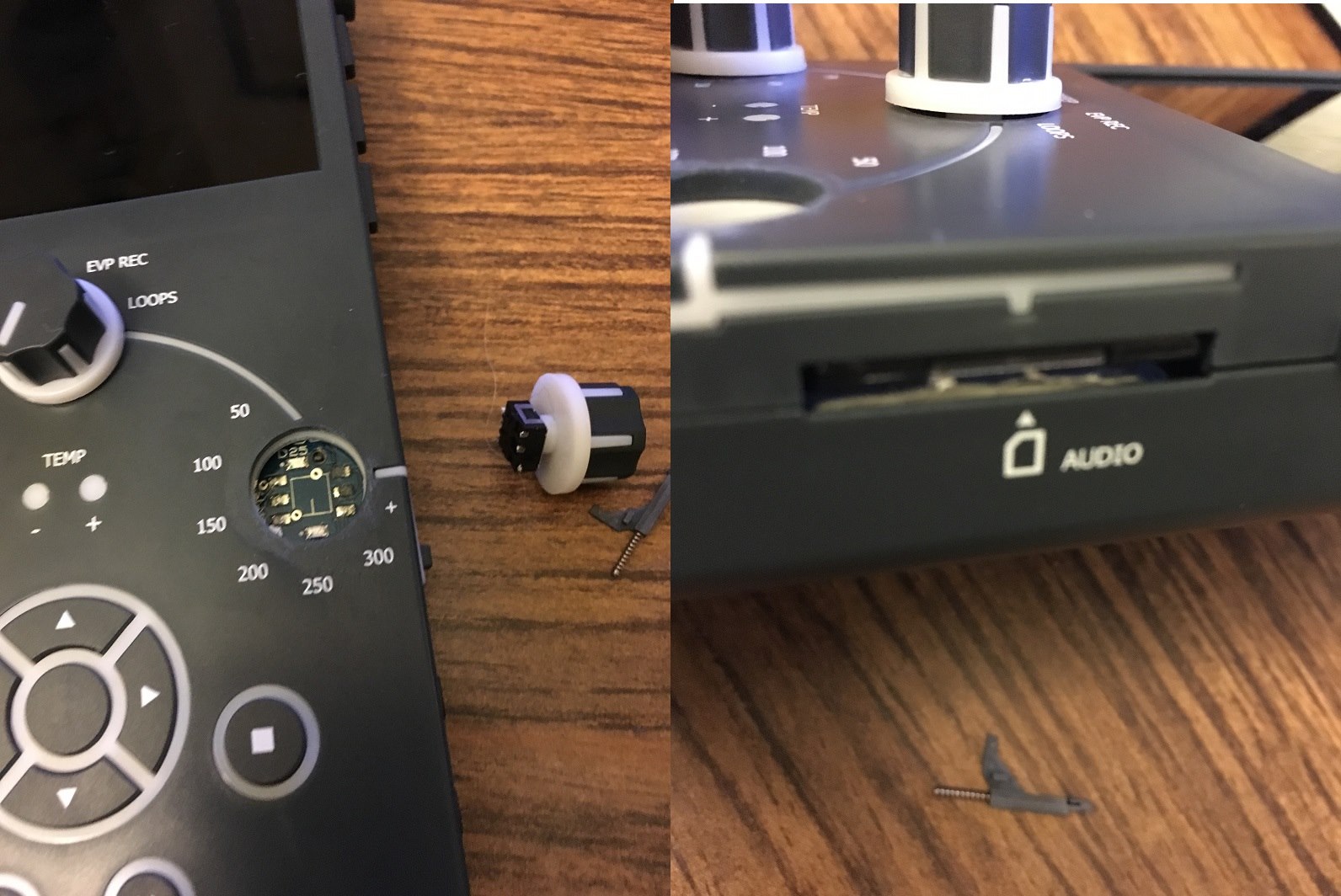 Customers who were expecting to receive a product with two internal speakers were disappointed to find that despite speakers being listed as one of the device's features, the internal speakers were scrapped in the final version and the units were instead shipped with an external speaker… but it was the technical problems which was really causing the most upset within the GhostArk community.
Faults included the device failing to boot up, buttons and knobs that don't work, don't line up properly or even come off in your hand, and issues reading memory cards. As many predicted, the device also gave very inaccurate temperature readings due to poor internal shielding.
GhostArk responded by posting an update on Facebook, “some customers have reported problems related to the shielding system and box assembly of the GhostArk. We have immediately informed the people responsible of our manufacturing company Moko Technology so that problems of this kind won't happen anymore, and we can communicate that the second batch of 400 units will be sent before the end of the month and that all devices will be perfectly functioning without any defect."
It's at this point in the story that the divide between GhostArk and its customers grew. The team behind the device halted production of the remaining devices while this problem was rectified, adding to the frustration of the customers whose delivery date had already been pushed back twice.
I think it's pretty poor to pass the buck and blame their Chinese production house. I've never known a company name and shame their sub-contractors in this way in the past. We ordered the device from GhostArk and it's them who should be dealing with our complaints and concerns.
During the design and pre-order phase GhostArk were very active with their communications but as the shipping date closed in the company's updates became frustratingly less frequent. GhostArk haven't sent a single newsletter out since before pre-orders closed, luckily I was following them on Facebook but even there their updates were few and far between.
Facebook turned out to be something which GhostArk were unable to manage well, at times they became aggressive and defensive in response to frustrated customers concerns. The reason these customers were so frustrated is that all GhostArk were doing was dishing out copy and paste, stock replies which lacked any real detail. Then to anger people even further, negative comments and reviews were deleted from the GhostArk Facebook page.
However, GhostArk did stick to their promise to send out replacements to the effected customers, at least from my perspective. It took another three months for my second device to arrive, which is fine, I'd rather they take the time to get it right rather than rushing orders out. In fact I think the initial shipping should have been pushed back another six months and these problems could have been avoided.
GhostArk sent me a replacement device, I was not asked to return the faulty device first so I was not left out of pocket in terms of shipping costs. According to the company's Facebook post I would be provided with "instructions on how to ship defective devices back." I wasn't and there were no instructions with my replacement. This doesn't seem to have been the case for everyone though, many customers outside of Europe are unhappy that they are being asked to return faulty devices at their own expense before they can get a replacement, pretty poor service given the situation. 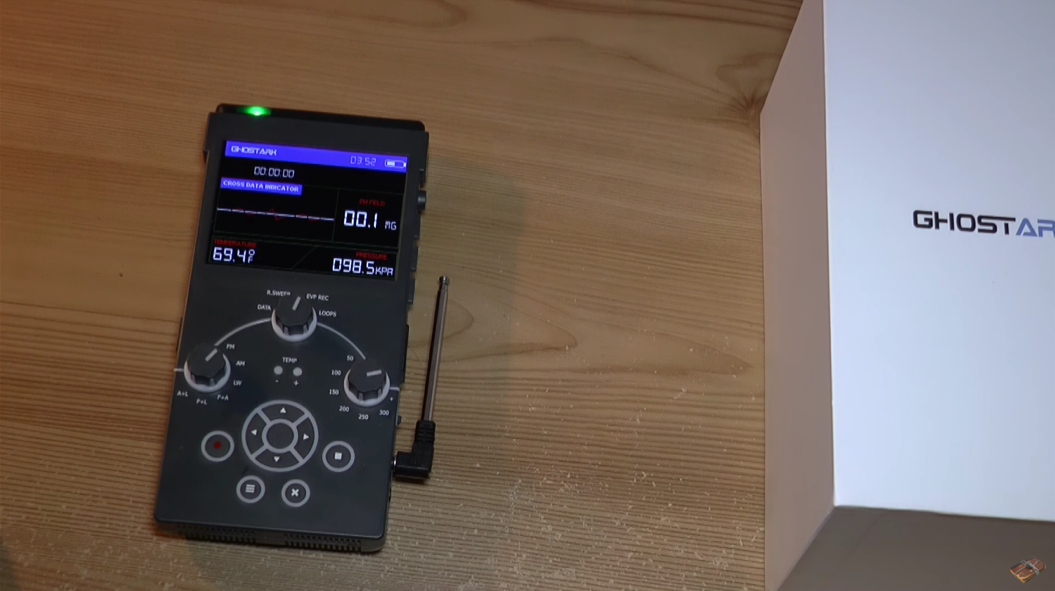 I was very excited about receiving my GhostArk and I was within the first 200 lucky customers to get mine. But it turns out that being in that initial batch wasn't so lucky after all as the products were recalled due to widely reported issues of internal shielding inadequacies and of course, the other big issue was the knobs on the device. On my device, all three of the main function knobs didn't line up to the available options. They also unnecessarily rotated a full 360 degrees and click in to positions with no corresponding setting.
The rest of the build of my first GhostArk was pretty solid and aesthetically it looked great. I really love the look and feel of the device, I just wanted one which worked properly.
Other than the previously mentioned inaccuracies and aesthetic issues, my GhostArk actually worked pretty well. I took it out and tried it in a few locations, made a few videos and it handled well but as time went on it started to get unreliable. I started encountering issues with booting up the device to the point where it didn't start up correctly more often that it did, rendering it pretty much useless.

Do I Regret Buying A GhostArk?

No, not at all. GhostArk look really cool, they're fun to play with and all of the main features work well (with the exception of the temperature reading.) I've even made friends from around the world while immersed in the online community following the progress of GhostArk.
Of course as a skeptic I don't think my GhostArk will ever actually be able to pick up any signs of a ghost anyway, so in that respect the device never really "works” in my eyes, but I can see why these teething problems would have been frustrating for a paranormal researcher who relies on these tools.
If Massimo and the team ever release a GhostArk 2, I might be tempted to get a second one as I think next time around they would totally nail it have learnt about some of the difficulties with this first version.
Having said that, the product I receive does now seem to be a decent working version, it's not quite perfect. And they're not far off, in my opinion all they'd need to do is fix the shielding issues so the temperature reads correctly and include internal speakers.
So, although I don't regret my purchase. I'm not sure if I would recommend GhostArk to a serious ghost hunter. You might be better off sticking with your individual gadgets rather than the all-in-one, especially as those individual products would probably cost you less. But it you're just starting out and you want one, fun, ghost hunting device then the GhostArk could be a good option for you and it certainly will get you plenty of attention when you use it out in public.