Was The Original 'Ghostbusters' Movie Inspired By Disney's 'Lonesome Ghosts'? 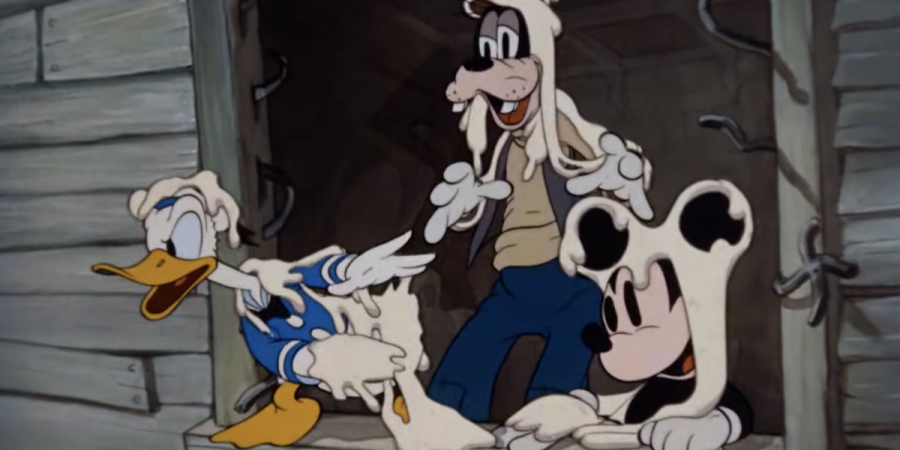 Photo: © Disney
The film begins with three ghost exterminators arriving to deal with a pesky ghost, one of the team bravely declares "I ain't scared of no ghosts," before battling it out with the ghosts and ending up covered in sticky white gunk.
This might sound like the events of the 1984 supernatural comedy movie, 'Ghostbusters', but this film was released almost 50 years earlier and starred a mouse, a duck and a dog.
'Lonesome Ghosts' was a 1937 Disney animated short featuring Mickey Mouse, Donald Duck, and Goofy, which has recently been thrown back into the limelight after being made available on Disney+.
There are seemingly a lot of similarities between the short and the original 'Ghostbusters' movie, most notably the moment Goofy says "I ain't a scared of no ghosts," which is very reminiscent of the famous 'Ghostbusters' catchphrase, "I ain't afraid of no ghost".
So, does this mean that the original 'Ghostbusters' movie was inspired, at least in part, by the Mickey Mouse cartoon?
It's not so much a case that one movie inspired the other, but that they both draw on the same inspirations. Ghosts have been a popular topic for movies since long before 'Ghostbusters' and even 'Lonesome Ghosts'. Ghost movies from the 30s included Abbott and Costello's 'The Time of Their Lives' and Cary Grant's 'Topper'.
By the late 1930s, the classic movie trope of a haunted house was already well established, both the 'Lonesome Ghosts' and 'Ghostbusters' employed this and other common ghost tropes in their films. This means the Disney version serves as a child-friendly homage to other ghost-themed movies of the time, while 'Ghostbusters' was almost an 80s tribute or throwback to the genre.
Dan Aykroyd wrote the original film along with co-star Harold Ramis, and would have been familiar with many of these ghostly tropes in movies due to his own upbringing as part of a family that had a deep interest in the paranormal.
Dan's great-grandfather, Samuel Augustus Aykroyd, held weekly séances in their family home in Ontario, Canada. Dan's father, Peter Aykroyd came in to possession of all 83 of Samuel's journals of his paranormal studies. Peter turned these journals into a book, 'The History of Ghosts', published in 2009.
Dan, who provided the book's foreword, wrote that it was his family's early-1900s exploration of contact with the spirits of the dead that inspired 'Ghostbusters'. He said, "part of 'Ghostbusters' appeal derives from the cold, rational, acceptance-of-the-fantastic-as-routine tone that Bill Murray, Harold Ramis, director Ivan Reitman, and I were able to sustain in the movie."
Other similarities between the 1937 and the 1984 films include the fact Mickey, Donald and Goofy make up a team of three ghost hunters, like Peter, Ray and Egon and the beginning of the first 'Ghostbusters' film.
You can watch and edited version of 'Lonesome Ghosts' below. Some of the 'Ghostbusters' similarities aren't included in this three-and-a-half-minute version, but the full eight minute original can be seen on Disney+.
Early in the Disney short, the Ghost Exterminators get a call as they are sat around a table sleeping. This is mirrored in 'Ghostbusters' when the original three team members get their first call while sat in a similar way around a table eating Chinese food, paid for with the last of their petty cash.
Disney's ghost hunt ends with the team crashing into some barrels of molasses and bags of flour, this results in them being covered head-to-toe in a sticky, white substance. This is very similar to the end of the 1984 movie when the Ghostbusters are covered in melted marshmallow in the wake of the Stay Puft Marshmallow Man.
While there are some similarities between the two films, there are also some major differences in the plot. The Ajax Ghost Exterminators, lead by Mickey, aren't armed with high-tech ghost-hunting equipment. It seems their aim is to exterminate the ghosts using a shotgun and an axe, where as the boys in grey are more about trapping and incarcerating the spooks.
Mickey and his gang are also armed with a butterfly net, pickaxe, mousetrap and rope. All off which seem like they'd be pretty ineffective against the undead.
Mickey's gang don't so much defeat the ghosts to save the world, but instead accidentally frighten them away. After being covered in the sticky molasses mix, the three ghost exterminators inadvertently take on the appearance of ghosts themselves, resulting in them scaring the actual ghosts out of the house.
Tags:
moviesghostbustersparanormaldisney