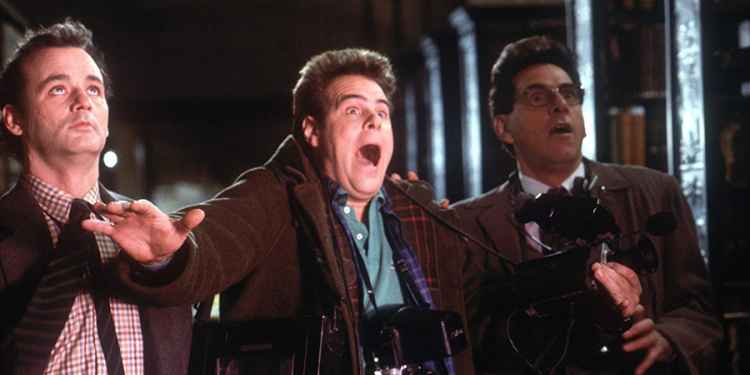 Every few years a story about Dan Aykroyd writing 'Ghostbusters 3' emerges. This has been going on for the last twenty years, but since the 2016 all-female reboot the rumour mill has been quiet... until now.
Aykroyd wrote the original two Ghostbusters movies with his co-star Harold Ramis, and has ever since been passionate about releasing a third. Speaking on a US talk show this week, Dan has said that a script is being written "right now" and that the original cast are likely to reunite for the project. Of course, with the exception of Ramis who passed away in 2014.
Back in 2010, at around the time when Dan was pushing his Crystal Head vodka he was also working on a script for a third Ghostbusters movie, in which he reprised his role of Ray Stantz alongside the other originals. However, fans were left waiting.
Then two years later, Dan was once again talking in an interview about his Ghostbusters 3 script, this time promising that Rick Moranis would return as Louis Tully. He told Empire, "if we can get the script to Ghostbusters 3 right, then it would definitely have Moranis as a major component." Once again, nothing came of this.
Then in 2014 it was revealed that the third Ghostbusters movie would be a reboot featuring Melissa McCarthy, Kristen Wiig, Kate McKinnon and Leslie Jones. That movie was released in 2016, but many fans weren't happy with the all-female cast, despite the fact it was actually a pretty good movie. Although this reboot had Aykroyd's blessing, it wasn't the third movie he intended to make.
Before the release of the 2016 movie, speaking on US radio, Dan said he'd already written three drafts of a third movie. He said "we're gonna be able to use it some day. Let's get this reboot made and that will reinvigorate the franchise and then we'll go on to maybe doing a more conventional third sequel as we were planning."
The 2016 movie, 'Ghostbusters: Answer The Call' grossed $229 million worldwide, making it the highest-grossing live-action comedy in the US of that year, but with a production budget of $144 million and a high marketing budget, it was considered to be a box office flop.
Due to its failure, it seems that we won't be seeing anymore from the female ghostbusters, which means the coast could now be clear for a movie featuring Dan himself, Bill Murray, Ernie Hudson and perhaps Rick Moranis and Sigourney Weaver. This week speaking on the American cable and satellite television network ASX TV show 'The Big Interview with Dan Rather', Aykroyd said "there is a possibility of a reunion with the three remaining Ghostbusters... it's being written right now."
The main sticking point for a third movie has always been Bill Murray's adamant refusal to play the role of Peter Venkman again. But speaking in this week's interview, Dan said "I think Billy will come. The story's so good. Even if he plays a ghost."
Bill did feature as a cameo in the 2016 movie, although not as Venkman, but as skeptic Martin Heiss. Aykroyd, Annie Potts, Ernie Hudson and Sigourney Weaver all also cameoed in the reboot, which might suggest they still have an ongoing interest in being involved in future Ghostbusters projects.
Only time will tell, but there's clearly still enough supporting fans to warrant a new Ghostbusters movie.
Tags:
paranormalghostbustersmoviestopical