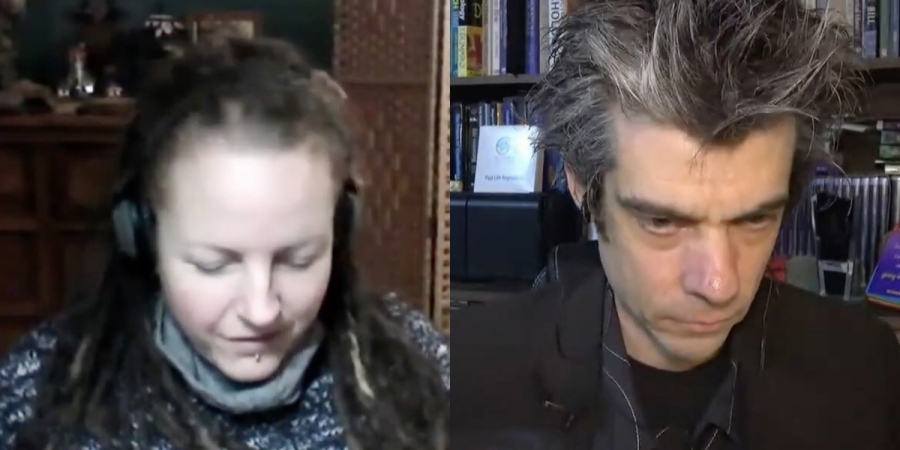 Photo: youtube.com
Hypnotist and master practitioner of neuro-linguistic programming (NLP), Paul Goddard, seems to have captured an unexplained ghostly voice during a recent live stream that has left him stumped.
Paul, a clinical hypnotherapist, is known within the paranormal community for his work with past-life regression and is no stranger to performing these regressions live on the internet, but during a recent broadcast he unexpectedly caught what can only be described as a phantom voice.
The voice was heard as Paul's followers watched him conduct a past-life regression session with paranormal investigator, Kate Ray, who is known for her explorations of modern spiritualism and the realms of the fae. Neither Paul or Kate heard anything at the time, but viewers watching the live stream heard what can only be described as a whispered voice saying "tell her".
As the voice wasn't heard aloud at the time and was only captured by the camera's microphone, it make the voice a great example of Electronic Voice Phenomena. EVPs are the mysterious sound of disembodied human-like voices of unknown origin that are heard through electronic devices. They are usually heard in the form of sounds imprinted on an audio recording, but can sometimes be heard in video recordings and even during live streams.
The voice was heard as Kate talked about turning 40 in her past life while in a trance-like state induced by Paul. After Kate told viewers "I now do definitely feel very old and very content with life," a mysterious third voice was heard that was clearly neither Kate or Paul's. It seemed to be saying "tell her" and appeared just before Kate's next sentence, "I tell you the phrase that's come to me, is an odd one..."
After viewers alerted Paul to the clip, he went back through the recording of the live stream and isolated the moment the voice was heard. You can watch the clip below...
The voice presented in the video is very clear and an excellent example of an EVP. It's impossible to say for sure if this is evidence of the paranormal or not, there could be a rational cause, but those rational explanations don't seem any less far-fetched than the possibility that what's heard in the recording is the voice of a spirit in this case.
This clip is taken from a 90-minute live stream that originally streamed on November 7, that you can watch in full here. Paul, who regularly facilitates regressions online, was joined by Kate for this particular live.
Kate is a practising witch and a student of parapsychology who writes for Haunted Magazine and has appeared on television and radio, mostly talking about her passion for the realms of the fae and the various types of elemental entities that investigators might encounter on ghost hunts.
Although in the clip we see Paul putting Kate into a deep meditative state in a one-on-one session, the hypnotherapist recently hypnotised a whole audience at a paranormal convention in Leicestershire. Paul was one of the many guest speaking at the 2022 ParaMeet that took place at Bosworth Hall in September, Kate was also on the event's line-up, kicking this off as the day's first speaker.
We caught up with Paul for a chat at the event. He told us "hypnosis is about pacing and leading people, so when you're doing an individual you can see them relaxing into that deeper state that people call hypnosis." But Paul says the pace can be different for everyone, so when working with a group the hypnotic induction might not work on everyone. He explained, "sometimes you might get people in a group that don't get a regression. If they came to you individually they would be able to get a regression."
But despite this, Paul had plenty of people in the audience at Bosworth who did have interesting regressions. Watch the video below to hear more from Paul, including how he thinks elements of suggestibility relate to paranormal investigations.
Tags:
paranormaltopical