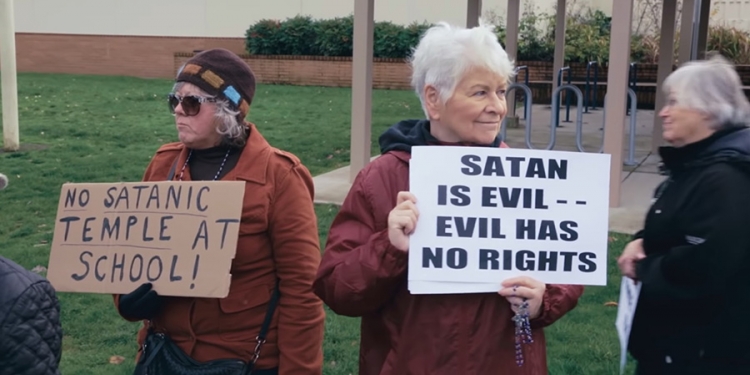 Photo: hailsatanfilm.com
A new deadpan documentary aims to challenge people's preconceptions of Satanism when it's released next month. 'Hail Satan?' is directed by Penny Lane and has received positive reviews after its screening at various film festivals.
In the battle for justice and equality, the Satanic Temple is putting up a hell of a fight. 'Hail Satan?' is released in selected theatres across the US from April 19. You can find out more and buy tickets at hailsatanfilm.com.
The movie's title might conjure up visions of human sacrifice, blood rituals and black magic, but the reality of the Satanic movement couldn't be further away from these misconceptions. Although, it's fair to say that the religious movement is an interesting and controversial one.
'Hail Satan?' follows the Satanic Temple, a group which started six years ago, as they embark on a of well-orchestrated public events designed to make a stand against religious freedom and equality. The Temple is one of the most controversial religious movements in US history.
In a country where "in God we trust" is stamped on everything from banknotes to government buildings, it's easy to understand why this group, lead by Lucien Greaves, are causing a bit of a stir as they call for a Satanic revolution.
In reality, there is nothing blasphemous or evil about the movement. They just consider themselves to be different and use symbology and their mischievous sense of humour to help bring awareness to their social and political justice causes, which includes religious freedom and challenge corrupt authority.
The movement, which has grown in numbers from three to 50,000 in just three years, isn't about worshipping the Devil and Satan doesn't represent evil, it seems it's merely a gateway to rebellion and symbolises of freethinking.
The documentary has already been shown at the Rotterdam Film Festival and Sundance Film Festival, where it has received glowing reviews.
There's not yet any word on the movies international release or streaming options.
Tags:
paranormalmoviestopical