I Sold A "Haunted" Doll On eBay

This article is more than six years old and was last updated in January 2020.

A week ago I bought a doll from eBay. A vintage, 1960s, children's toy which cost me £12. I then re-listed it on the auction site as a "haunted" doll to see how bidders took to a haunted doll. 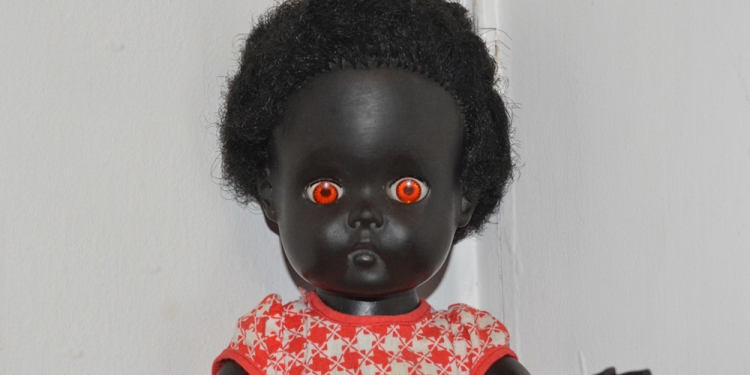 I asked a friend to buy a black doll with amber eyes for me on eBay, it was important that I didn't have any history of the purchase on my eBay account. It cost me just £12, despite being about 50 years old. I don't think the doll is particularly rare and she isn't in great condition, there's been some damage to her over the years.
As soon as the doll arrived, I re-listed it on eBay but rather the selling it as a "vintage black doll" I described it as a "haunted doll."
The aim of my little experiment was two fold, firstly to see if bidders on the auction site would believe that this little dolly is haunted, despite there being no evidence or reason to believe that the doll is haunted other than my description on the auction.
Secondly, I wanted to see if I could actually sell the doll for more than I paid for it. Bearing in mind that the doll is slightly damaged and was only worth £12 when I bought it, but would claiming that the doll is possessed by a spirit raise its price? 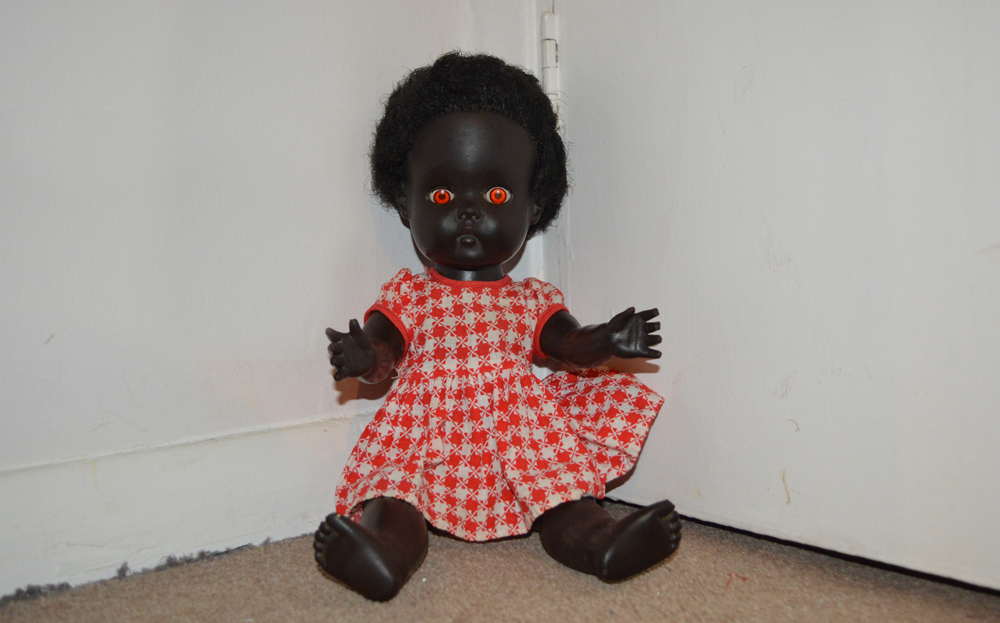 The first thing I wanted to do was capture casual shoppers' attention with a creepy photo. The "amber" eyes of the doll are already quite striking and are what attracted me to her as my subject, but to highlight this I manipulated the photo very slightly to make her eyes a tiny bit more red, slightly more evil.
I also made sure the photos were a little uncomfortable and creepy. I thought a good way to do this was to sit the doll in the corner of a room like a naughty child. Even creepier, for the photo which is supposed to look like I'm just showing the back of the doll, I stood her facing the corner. 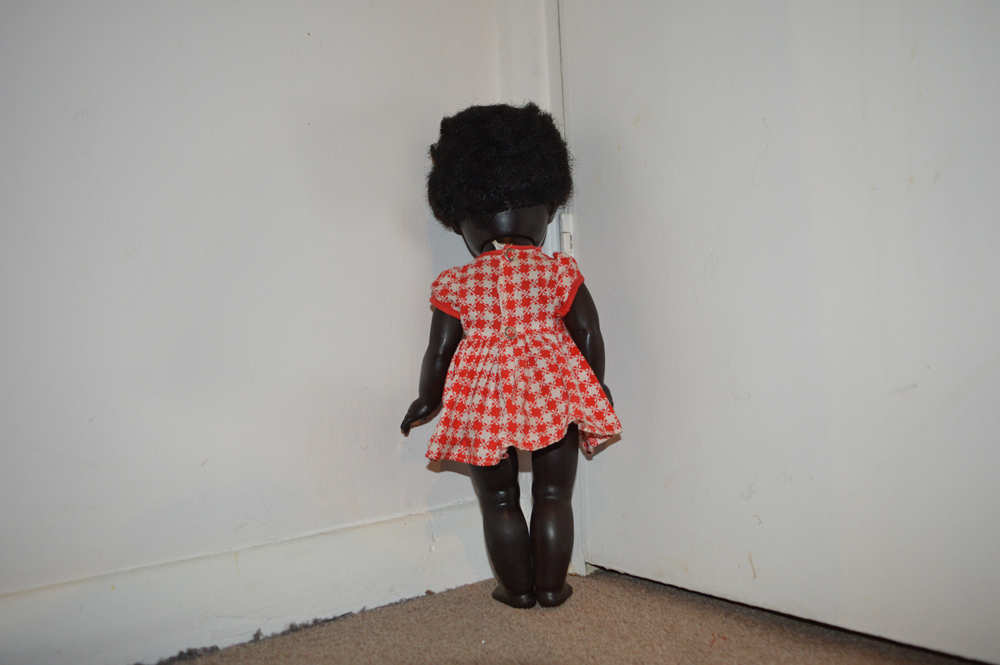 I also put a lot of thought into writing the description. I needed this to be equally as unnerving, but subtle. I wrote it from the angle that my sister was selling the doll because she thought it was haunted.
I used phrases like "get rid of," "my sister is convinced," and always referred to the doll as "she" or "her" or by the name I gave her, Rose. I felt it was important to personify the doll rather than talking about it like an object, the name really adds to that as does the inclusion of details like wanting her to go to a "good home."

My sister has asked me to get rid of this vintage black doll for her. We're selling Rose (as my sister calls her) rather than throwing her away as my sister feels that Rose needs to go to a good home, someone who wants her.
Rose has creeped my sister out since she found her, especially her big, bright amber eyes which open and close. My sister is convinced that Rose moves on her own, only slight movement, like she'll be sat in a different position to where she was left.
We've found similar dolls online and believe she's a once-loved toy from the 1960s, we're not too sure as my sister found her in the garage of her new house when she moved in.
Rose is 35cm tall, made in England from a soft plastic and comes complete with a red gingham-like dress. It looks like there has been a little damage to her dress over the years which has been repaired.
She's not in the best condition, she's lost the ends of a few fingers and toes and her eyelashes have gone, there are also a few minor scratches on her back.
My sister would like Rose to go to a good home or a collector, as she feels that whatever has attached itself to the doll just wants attention and she doesn't want to anger or upset it. 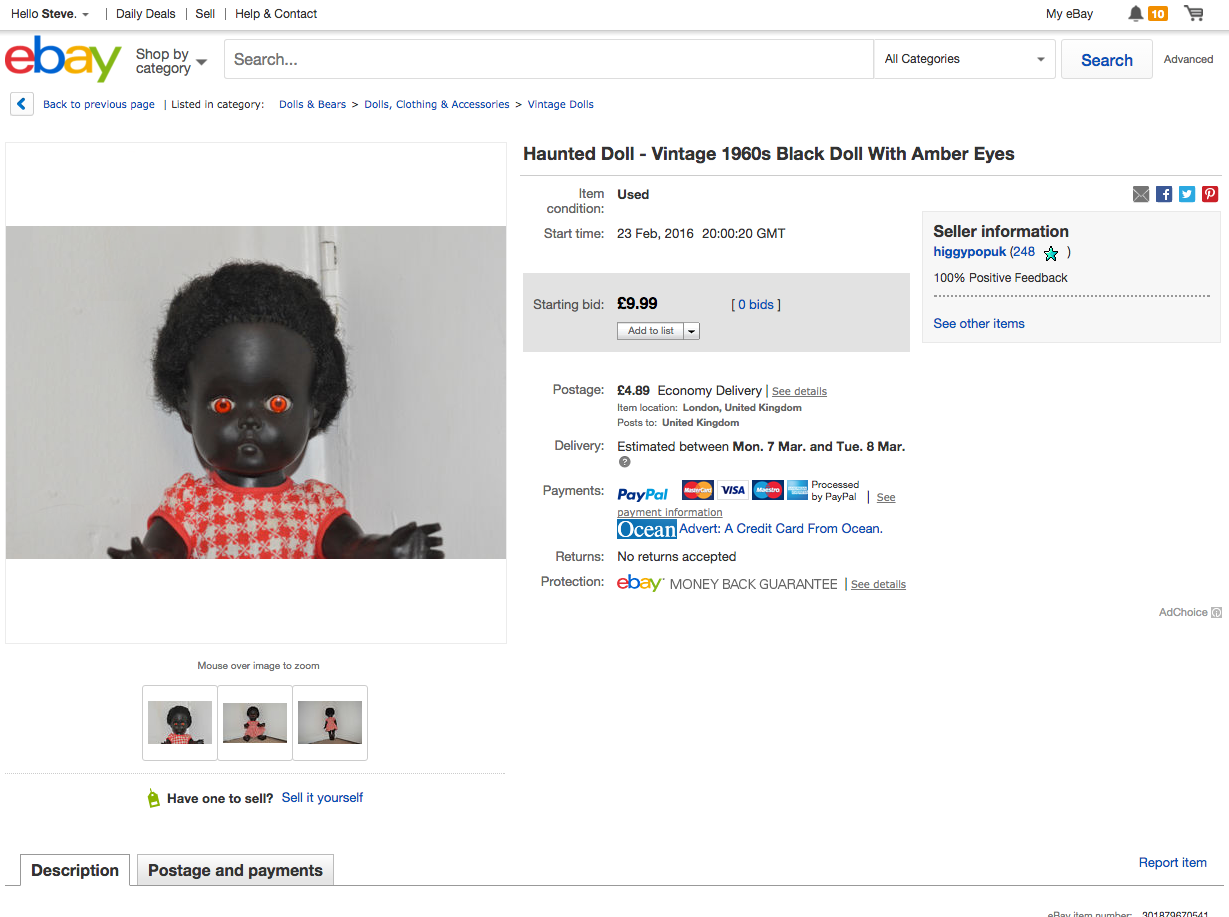 Well, yes... and by claiming it was haunted I actually did make a profit on it. I knew the auction was going well when very quickly it got up to 18 watchers. When I bought the doll it had been on eBay for almost 30 days as a 'buy it now' auction and it had zero watchers.
My auction in total was viewed by 184 people, there weren't many bids early on but they did roll in in the final hours. I think it was a case of people waiting to see a bid on the item to confirm their belief that is was a real haunted doll.
Before the first bid came in, one shopper did ask a question about the product, the only person who did.
"What other activity does this doll produce and do you feel she is a negative energy to have around?"
YeahLouUK - eBay user
When the auction finally closed this evening the doll had reached a total of £32, that's a clear £20 profit on my original purchase.  This means, my unsubstantiated claim that an innocent child's toy is haunted actually increased the items value by almost three time.
Original purchase price: £12
Price at auction: £32
Profit: £20
Don't worry, I didn't really sell the doll.  I canceled the auction in the final hour so that no one parted with any money, it wasn't my aim to rip people off.  The only person out of pocket is me... anyone want to buy an old broken doll?
Tags:
paranormalghosts