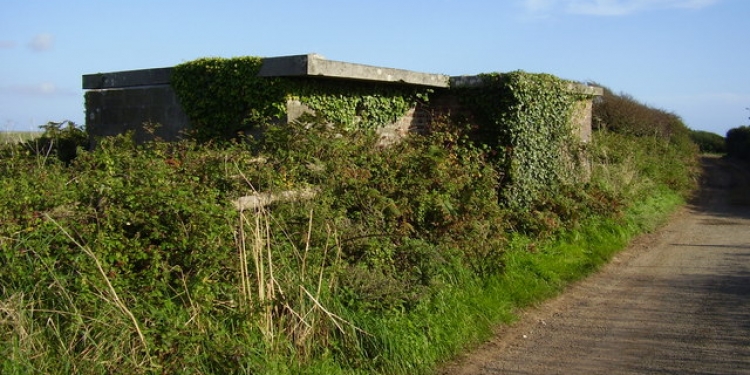 Photo: © Anthony Vosper
A Second World War 56-bedroom nuclear bunker in Salcombe has gone up for sale for £435k and it comes complete with its own broadcast studio and the ghost of a wartime pilot.
The two-storey bunker known as Hope Cove lies beneath the site formerly occupied by RAF Bolt Head, a World War II airfield in Devon. The semi-sunken bunker, codenamed Gull Perch, was part of the Air Ministry's ROTOR project, which provided complete radar cover for the UK.
The bunker is approximately 3,000 square meters in total, and has 28 rooms on each of its two floors, some of which have been extended with a mezzanine.
In the late 1950s during the hight of the Cold War, the site was turned in to a Regional Seat of Government by the Home Office and later became a Sub-Regional Control, Sub-Regional Headquarters and finally a Regional Government Headquarters before it was decommissioned in 1994 as the threat of nuclear attack diminished.
For a time it was believed that the bunker was given an overhaul in the 1970s bringing it up to the standards of Hack Green, but apart from a few updates to wiring and communications, the bunker has remained pretty much unchanged since its time as a ROTOR station.
The bunker is said to be haunted by a WWII pilot who has been seen by RAF personnel, most frequently on the stairs leading to the bunker's lower level.
In 2019, bunker buster Matthew Williams of Truth Seekers visited the bunker for an extended look around with kind permission from the owner. Matthew spent more than two hours exploring every corner of the impressive bunker and shared his visit uncut in a YouTube video. Matthew was guided around the bunker by its curator, Christopher Howell.
The video reveals just how untouched the bunker is to this day, with many of its original features, fixtures and fittings still intact, including several large plotting room maps which would have been used to monitor the aftermath of an attack and formulate a response. Considering the bunker's age and construction methods available at the time, it is in good condition.
The bunker was fitted out with a BBC studio from its time as a nuclear bunker during the Cold War. The studios were equipped to allow officials in the bunker to make emergency broadcasts to surviving members of the public, both locally and as part of a national emergency broadcast infrastructure.
The bunker was first put on the market back in 2011, but with a guide price of £750k at that time, it failed to sell. The bunker was put up for auction again earlier this year, but once again it failed to meet its reserve price despite a fair amount of interest in the unusual property.
Tags:
undergroundurbexparanormaltopicaldevon