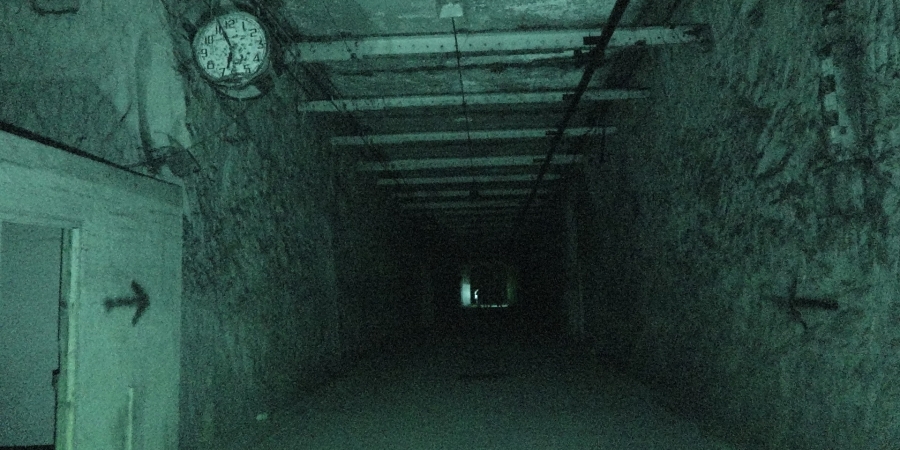 Photo: © Just Paranormal
It's become pretty normal for paranormal teams to stream their investigations live online for their followers to watch, but there's one location that has never been the focus of a live stream until now.
Drakelow Tunnels near Kidderminster has always managed to keep live streamers at bay, not because of its reported paranormal activity, but because of the lack of any means of getting a live signal out of the 3.5 mile network of tunnels.
The grid system of interconnecting tunnels is situated in a remote location near the village of Kinver, in an area that's a dead spot for mobile phone reception and WiFi. To make matters worse, the former WWII facility was constructed 90 meters underground beneath Kingsford Country Park, this means it's completely shielded from the outside world.
There's been a big growth in the number of paranormal teams streaming live and as teams get more technically adept, they're beginning to take on bigger challenges. They don't come much bigger than streaming live from this sinister site that expands over 26,000 square meters underground.
Just Paranormal have teamed up with Wednesbury Paranormal, Paracom and Willows Paranormal for a series of live investigations from inside the now-abandoned tunnels, which recently ranked amongst the 20 most haunted locations in the UK.
The first of these free online events takes place on the night of Saturday, August 15 and can be watched via Just Paranormal's website. The team will be focussing their investigation on the infirmary and the old control rooms. These areas are situated in a part of the former WWII Rover shadow factory that was refitted and put on standby during the Cold War as a bunker for the local government.
Broadcasting live from a remote underground facility will require the team behind the self-funded project to use some specialist equipment, as they'll need to get the camera's feed out of the tunnels before they can stream the images to the internet. This involves the use of a 500 meter video cable to relay the signal to the outside world.
As well as the technical challenges, they'll also have the tunnel's spooks to lookout for. Visitors to Drakelow, which is now a popular destination for ghost hunters, have reported hearing strange noises, screaming and cries, and disembodied voices while wandering in the darkness.
There's also been reports of poltergeist activity and countless sightings of strange light anomalies and even full apparitions. Could these be the spirits of three men who, according to local newspaper reports, were killed during the construction of the tunnels in the 1940s by a roof fall? Or perhaps the ghost of one of the factory workers who lost their lives underground after being hit by trucks or while riding conveyor belts.
Even the site's owner, Sid Robinson, won't set foot in the tunnels alone after experiencing how bad the hauntings can get. While working alone on a ladder one day, he says he was pushed and fell, breaking his leg in three places as he landed.
Sid describes the demon who haunts the tunnels as a half man, half dog-like creature and says people have felt it brushing past their legs in the darkness. Could this be the "demonic guardian" that is supposed to protect the hundreds of bodies believed to be buried on the site of an ancient hill fort that the tunnels were built underneath?
You can watch Just Paranormal's live investigation of Drakelow Tunnels on August 15 at justparanormal.com/live-stream.
Tags:
paranormalworcestershireundergrounddrakelow tunnels