Latest Psychic Predictions For Brexit In 2019 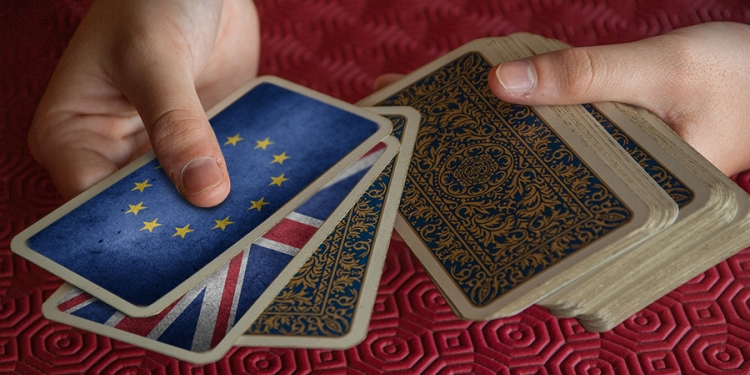 The outlook for the future of Britain has been uncertain since the country voted to leave the European Union in the 2016 referendum. Now, it's just over three months until the UK leaves the EU and our future isn't any clearer.
Because of this uncertainty, for the last two years many business owners and worried Brits have been seeking advice from the psychic community to gain insight into the longterm prospects of the country's future and what our exit from the EU might actually look like.
In his latest set of predictions, celebrity psychic Craig Hamilton-Parker, has said that the UK will leave Europe with a hard Brexit, that there will be some short term disruption as a result of this, and that British Prime Minister Theresa May will resign after the process is complete. He even hinted at some of the forerunners who might take May's seat as the leader of the Conservative Party.
Craig made his Brexit predictions as part of an hour-long video in which he talked about what he thinks will happen around the world in 2019. He covered off everything from the likelihood of President Trump being impeached and possible terrorist attacks and upcoming world crisis, but when it came to Britain's future, the big talking point was of course Brexit.

Craig has foreseen that there will be a hard Brexit. This is where the UK leaves not only the EU but the single market and the customs union. In this scenario, the UK would instead aim to secure free-trade deals with the EU.
The psychic says, "even though they're trying to make all these deals and have these different ideas about how it's going to go, I think it's going to be taken right to the wire". But, he says Britain will manage to make a deal, "we won't be given a deal until just a few weeks before we step out".
According to Craig's predictions, there won't be any sign of Europe giving the UK any leeway until after December 2018. He predicts that at the last minute Germany and France will put pressure on the the EU to give Britain a deal and that it will be the car industries in those countries in particular pushing for a deal.
Craig also thinks that a deal will be made to prevent a hard border and physical customs checks between Ireland and the rest of the British Isles.
There has been a lot of talk in recent months about disruption at ports and problems getting goods in and out of the UK after March 29th when the UK leaves the EU. Craig says, "there is going to be Brexit disruption, I don't think it takes a psychic to tell you that". However, the medium says that the initial chaos will pass quickly and trade flow will get back to normal soon after. He wisely says that people will always find away to make sure they make money and adds, "it's not going to be as bad as you think, it's going to be fine."
Surprisingly, Craig has predicted a positive effect to the UK's economy, foreseeing the pound soaring, not falling as predicted. He said, "I feel the pound sores in value, after Brexit and I feel investment in Britain is huge after Brexit." This is a bold claim considering the pound dropped to an 18-month low in December when Theresa May was told the Brexit chaos risks plunging the country into a "national crisis".
The Office for National Statistics reported that the drop was triggered by the impact of a fall in the manufacture of cars due to the impact of factory shutdowns, a sector closely linked to the EU.
He also thinks the housing market will recover fast, he predicted a boom in property after people have been holding back on buying and selling due to Brexit uncertainty.
Craig made his predictions in September, long before the mid-December motion of no confidence which saw MPs vote on whether they thought Theresa May was still a suitable leader for the Conservative Party. The PM secured 63% of the total vote in her favour and is now immune from a leadership challenge for a year. But, May's victory came at a cost, she had to promise her party that she would stand down as leader before the next scheduled election in 2022.
Even before this vote and May's promise to resign, Craig predicted that Theresa May will resign after Brexit is complete. He said that the PM will survive until Brexit and that she "wants to see the job through," adding that he feels she wants to "make her name in history by being the person who gave us Brexit".
But, immediately after our exit from Europe, May will resign. This will lead to a tight leadership battle throughout April 2019, with David Davis and Boris Johnson as the forerunners. Jacob Rees-Mogg will step aside. Craig predicts, "in the end, I think Boris Johnson will become the leader of the Conservative Party". He thinks all of this will lead to a general election later in the year, or at least calls for it to happen in 2020.
Craig thinks this election could usher in big political changes in the UK. He has previously predicted the formation of a new political party, there's been buzz around it but it's not happened yet, so he thinks 2019 could be the year it happens. He thinks that the Conservatives will go further right, Labour further left, making way for a new "middle-ground, centre party". This party will have milder ideas, and designs for going back into Europe. Craig thinks that Tony Blaire will be involved in the party in some way, perhaps just in the formation.

December 14th
Craig added a little more detail to his Brexit predictions in December. The additional insight he gave is that President Trump will see an opportunity to trade with the UK after Brexit and will bail the country out to some extent with a US trade deal.
May 26th
In new video post in May, Craig gives us some new psychic predictions for Brexit, as well as telling us who he thinks the UK's new Prime Minister will be and making an unexpected prediction about Nigel Farage.

Craig's Predictions For The Rest Of The World

As well as Craig's Brexit insight, he also talked about Germany's Angela Merkel being ousted, a new immigration crisis across Europe, riots in China, a severe Australian bushfire, violence in South Africa, tensions between Turkey and Russia,  and earthquakes in Nepal and the United States.
Some call Craig the new Nostradamus as so many of his predictions have come true. In the video, he explains how he uses spiritual insight, naadi readings and some astrology analysis to foresee world events with uncanny accuracy. He got a lot right last year and looks at both the correct predictions and incorrect predictions made last time. He also looks at some of the trends developing in world events and what lies ahead.
You can see more of Craig's video on his YouTube channel, many of which look into the topics raised in his 2019 predictions in more depth.
Tags:
psychicsbrexittopicalcraig hamilton parker