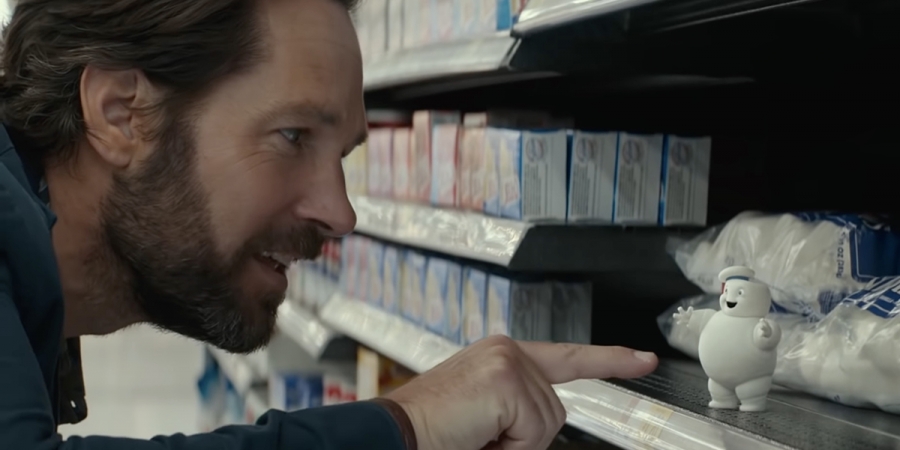 A new teaser trailer featuring Paul Rudd has dropped for the upcoming 'Ghostbusters: Afterlife' movie which includes a gang of adorable mini Stay-Puft Marshmallow men.
The new movie will star Bokeem Woodbine alongside Rudd, who will be playing the role of a local school teacher in the forthcoming movie.
It's also understood that Dan Aykroyd, Bill Murray, Ernie Hudson, Sigourney Weaver, and Annie Potts will cameo as their original characters in the 2021 movie.
The new teaser clip which dropped today shows Rudd wandering around a supermarket in Summerville, Oklahoma when he notices a packet of Stay-Puft Marshmallows moving. Then a tiny living version of the marshmallow brand's logo character, Mr. Stay-Puft, emerges from the packet.
Seconds later we see a gang of miniature marshmallow men causing havoc in the supermarket by toasting each other and even turning themselves into s'mores.
The new teaser clip featuring a cute but mischievous gang of miniature marshmallow men was posted on social media today, along with the caption "Sweet. Mischievous. Savage. 🔥Mini-Pufts are out of the bag, don't miss #Ghostbusters: Afterlife only At Cinemas Coming Autumn 2021."
Mr. Stay-Puft has been an iconic character in the Ghostbusters franchise after first appearing in the original 1984 'Ghostbusters' film as the physical manifestation of the apocalyptic Sumerian deity Gozer.
The marshmallow men may not be the only throwback to the original film that will find its place in the new movie. We already know that the movie revolves around the grandchildren of one of the original Ghostbusters. Although it's not yet been confirmed, the collection of spores, moulds and fungus seen in a previous trailer suggest a connection to Egon.
The trailer also introduces us to the Shandor Mining Company, almost certainly a reference to Ivo Shandor, the leader of the Cult of Gozer.
'Ghostbusters: Afterlife' was originally slated for release in the cinema on July 2020, but it became one of several big budget movies and productions to be delayed due to the global pandemic.
The film originally had its cinema release pushed back to March 5th 2021, but Sony Pictures later announced a further delay. They still plan to release the movie in cinemas, rather than a home-streaming release like some other big films. This means fans will now have to wait until November 11, 2021 to see director Jason Reitman's extension to the Ghostbusters universe.

More On 'Ghostbusters' View All