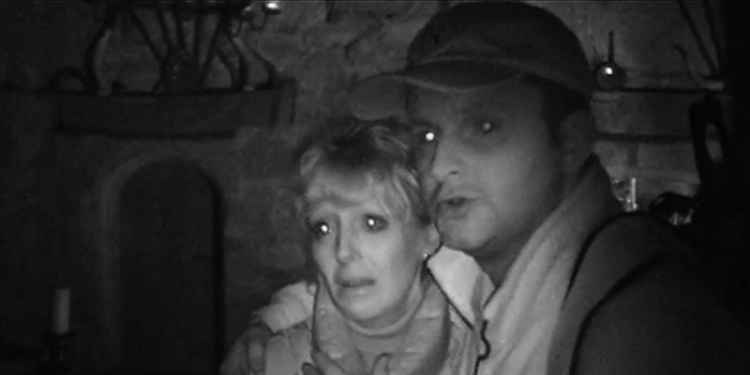 In the second episode of Most Haunted, Yvette Fielding and her team of ghost hunters tackle a castle, which has the reputation of being one of the most haunted places in Great Britain. One local priest once described the property as "an embodiment of evil."
The castle was built in the 12th Century and was once of the most important and senior stronghold in the region, playing a vital role in the English Civil War between the Parliamentarians and the Royalists. The castle also saw battles between the English and the Scots in the field surrounding it, at this time the castle offered protection for the English and imprisoned the Scottish rebels.
The current owner of the castle, Sir Humphrey Wakefield, gave Yvette a tour and filled her in on its haunted history, including the ghost of the Blue Boy. He's said to have been buried alive in the wall in the 'Pink Room', and ever since has been seen as a blue flash of light. Apparently, when some renovation work was carried out at the castle, the builders found a child's bones in the wall at the very spot where these flashes are seen.

Before this week's investigation got underway, Yvette introduced us to a few more members of the team. Including camera men Mark Ellison and Ian French, who'll be working alongside Rick Fielding who we met in the first episode. Rick confessed to feeling a little nervous about this investigation, going as far as to say he's "somewhat" scared.
We also met Martin Huntley, the sound recordist. Marcelle Lipman the makeup lady, who's in for a fright of her own this evening. And, Max Schofield, the show's researcher, who according Yvette says "keeps us warm with tea and coffee and food."
The show's resident parapsychologist, Jason Karl, shared his stance on the supernatural with Yvette, "I believe that certain things happen that we can't explain whether or not they are down to ghosts or some other explainable phenomenon that science can't currently understand is down to a person's personal belief."
He then shows off his ghost hunting kit, which includes an infrared camera which can see things that the human eye can't... that's especially true in the dark where the infrared primarily acts as night vision. He also has an laser thermometer, but he doesn't actually understand the basic principle of its operation. He claims that if you point it at something it will tell you the temperature of the air between the device and the object you've pointed it at. This is incorrect, this type of thermometer can't read air temperature, the reading given is the temperature of the solid surface it's being pointed at.
It was then time to bring in Derek Acorah, who Yvette described as "a man who claims he can talk to the dead. He has no knowledge of our location or its history."
Straight away Derek encounter the spirit of a lady, but before he could tell us much more about her, Rick felt faint. He almost collapsed and had to sit, he was seen to visibly be shaking. Derek said that this was due to "the essence of the lady" that he had sensed.
Derek's spirit guide, Sam, gave him some more information about the spirit. Apparently she was called Mary, and she'd effected Rick because she thought he looked like her husband. According to Jason, that matched stories that a spirit of someone called Mary haunts the castle looking for her husband.
The team then turned out the lights and started the investigation in the Minstrels' Gallery, lit by candle light they wandered around the castle led by Derek's spirit guide. But it wasn't long before Yvette screamed after hearing a strange hissing sound. This was also heard by Marcelle who had enough and left the investigation. Afterwards she said, "I'm so frightened, I can't think straight, I can't see straight."
In another part of the castle, Derek once again encountered the spirit of the lady and could now identify her as Lady Mary Berkley. He was possessed by the spirit of the Blue Boy and had a tantrum about being trapped behind a wall.
Meanwhile, the show's producer Karl Beattie, went off on a lone vigil to the store room next to the torture chamber, where he heard several odd sounds as if objects were being thrown in the darkness around him. Then suddenly a white plastic crate that was placed on a table top appeared to move of its own accord.
As Karl made his way back to Yvette and the rest of the team, he reported hearing a child laughing outside. The episode ended in the dungeon, where Derek made a connection with the spirit of an officer.
For reviews of all of the new episodes, plus highlights and evidence from the shows, and to find out when Most Haunted is on next, visit the Most Haunted episode guide.