This article is more than ten years old and was last updated in October 2018. 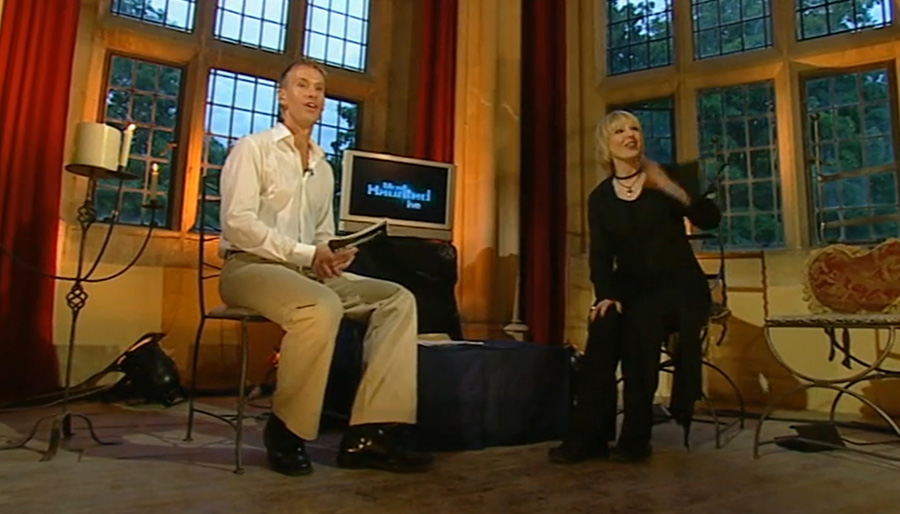 Yvette Fielding and her team of ghost hunters return for their forth live investigation, this time at an incomplete victorian gothic revival mansion, deep in the Gloucestershire countryside. The investigation mark the summer solstice, which Yvette describes as "the longest day of the year, possibly the most frightening night of our lives."
As with all the live shows, David Bull is pulling things together with a live audience including celebrity fan, Danniella Westbrook, in the mansion's drawing room, the only room in the whole of the grand building to ever be completed. Yvette says, "I'm a great believer that lots of houses were never meant to be lived in, and this is one of them."
And it's true, Woodchester Mansion was never completed and no one ever lived there, but the unfinished structure is home to around 450 greater horseshoe bats. Talking about her expectations for the night, Yvette said, "I think it's a massive building, it's absolutely beautiful, but there's something about it. What I'm really looking forward to is walking around and seeing what Derek picks up."

"Take my hand and let me guide you into a forgotten world, a place riddled with historical mystery, an ancient monument left to ruin. Come forth and witness the magic of Woodchester Mansion."
Yvette Fielding 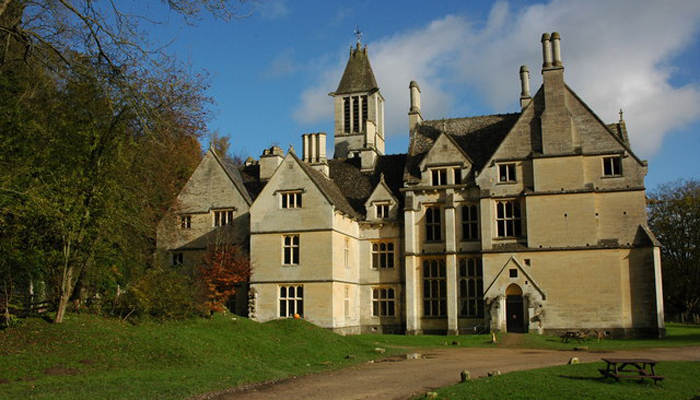 Photo: © Philip Halling
Woodchester Mansion is an amazing example of Gothic revival architecture, an incomplete Victorian masterpiece abandoned by the very builders who promised it life, ignored by people who pledged to nurture it, an aborted mistake that should never have happened. It was built on a site associated with great tragedy, some have even claimed it cursed. From Romans battles to Victorian duels, the tortured memories of this land are no less than brutal.
The mansion was commissioned by William Leigh and building began on the house in 1856, it was constructed from the finest Cotswold stone, it was to have 27 rooms and featured menacing gargoyles to keep watch. After 12 years of bloods, sweat and tears the building work came to an unexplained mysterious end.
One day in 1870 the workers upped and left, leaving their tools and plans behind them. The whole house was abandoned over night. Following William Leigh's death, his son, who had no interest in the property, asked the architect how much it would cost to knock it down. The price was more than the cost to finish it, so it was left standing.
Now, more than 130 years later, the house still stands, rooms unfinished, corridors leading to nothing and magnificent fireplaces that have never been lit.
The reason why construction ceased is unknown, but on a site that site that has been witness to bloody battles, satanic devil worship and murder, could their have been a darker reason why construction was permanently halted? In a building that never lived, Yvette and team have one night to find out who the phantoms and spectres are that have made this place spiritual home. 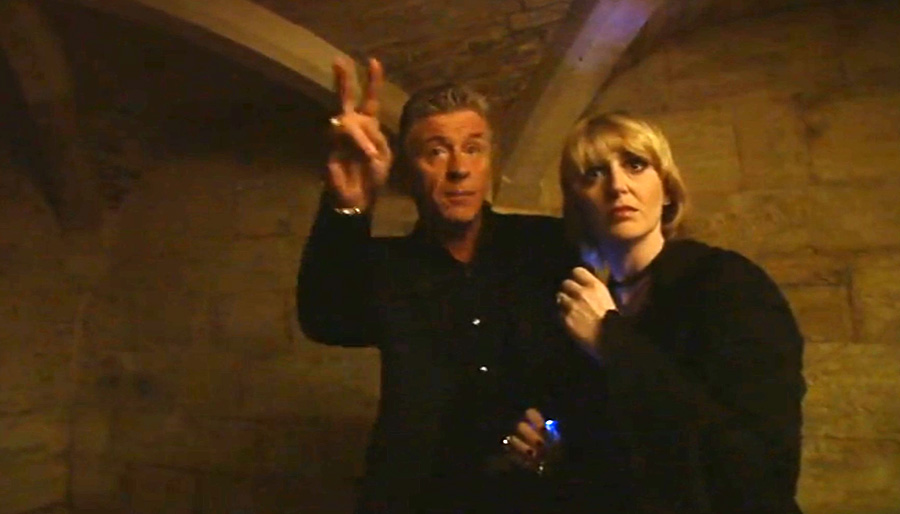 With it being the longest day of the year, it wasn't quite dark outside as Yvette headed for the first location of the evening, the mansion's cellars. However, in the cellar it was pitch and due to a technical problem with the camera's night vision, too dark to see Yvette, so she was forced to hand straight back to David in the studio where introduced us to two Most Haunted regulars - parapsychologist, Matthew Smith and historian, Richard Felix.
After a quick chat with the duo, David brought in a man who he described as "the David Beckham of the spirit world," the show's spiritualist medium, Derek Acorah. He headed off to join Yvette and paranormal investigator, Phil Whyman, in the mansion's impressive cellar, a maze of rooms and corridors. Weirdly, rather than using night vision cameras, the crew were just switching the lights off and using green lights instead. Perhaps this is because of the obvious risks of filming in a building with missing floors in complete darkness.
Those brave enough to venture deep into the mansion's lower level, are said to have observed some strange and terrifying occurrences, including the sensation of hair being pulled, unexplained noises, and dark shadow-like mists. Straight away Derek picked up on a spirit that was stood behind Yvette. He felt the essence of a ragged dwarf and a Roman centurion, both of which have been reported in the mansion previously.
The team the headed off to their next location, the second floor corridor, which is not only close to the attic which is houses a colony of bats, but it also said to be haunted by the ghosts of some US servicemen, who are said to have died here during a World War II training exercise in 1944.
Derek didn't pick up on the spirit of any of the 20 soldiers who are said to have lost their life, but he did pick up on the spirit of a woman who was strangled by a man, this apparently does match the stories of the location. He also mentioned someone called Vincent Lee, who apparently knew about the strangulation, but wasn't the person who committed the crime. Yvette the screamed when she heard a loud pop, the team couldn't identify a source of this sound.
Yvette Derek and Phil then moved on to the kitchen. Although not completed, it is one of the few spaces that has been updated since building has stopped. This area of the house plays host to disembodied footsteps, unexplained noises and a clock on the kitchen wall is said to stop and start on their own. Derek picked up on a ghost who he said liked to mess with the clock's pendulum.
Yvette and the gang then moved on to their next location, the mansion's grounds. Derek picked up on plenty of residual energy outside the mansion and a feeling of their groups of people in a circle chanting. He said, "the only way I can described it, is these people are grouping together for a common purpose... satanic, Devil worship." Derek even said the land was the site of a human sacrifice. Derek also picked up on the energy of a headless horseman who rides still rides through the grounds. Derek named the spirit as Sir Rupert de Lansigny, who rode a black horse. 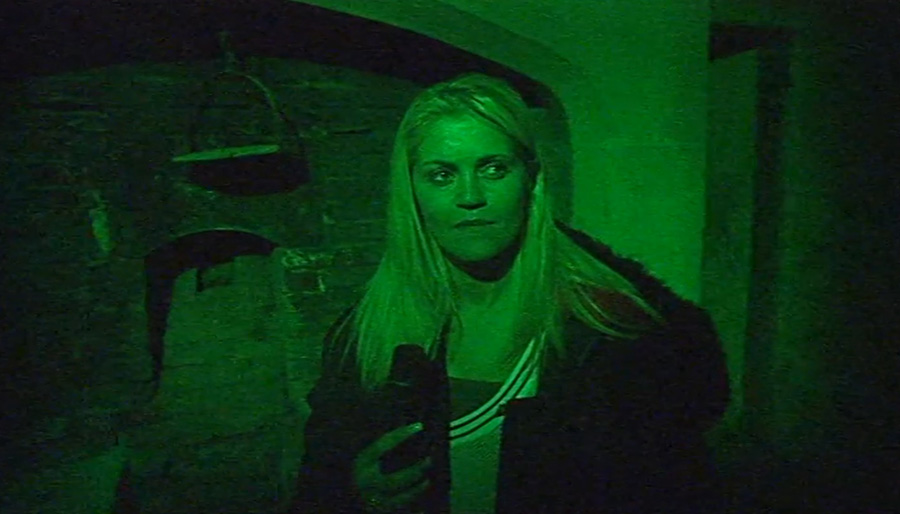 She'd been sat in the audience all night, now it was time for Danniella Westbrook to give ghost hunting a try herself. She told David, "I love Most Haunted and I'm a big believer in spiritualism, it makes me feel safe to know there's somewhere else to go to."
Danniella was sent on her own to the location that viewers has said was the most active location, the kitchen, where she was left alone and flooded in green light. She wandered around in the darkness, not really sure what to do. Before saying, "I'm just waiting for something to happen." But luckily for Danniella, nothing did.
After a while, Yvette and Derek joined Danniella, and they stood in silence for a bit, just listening and soaking up the atmosphere. After a while, the team said they heard a hissing sound. Moments later, at exactly midnight, the vigil was cut short when a static noise overwhelmed the audio feed, and the broadcast cut back to David in the studio.
When they cut back to Yvette, she revealed that they were hearing strange noises on microphones and in their earpieces and some of the team's mic pack batteries had suddenly died. They again concentrated in silence, and again heard the same hissing sound, which the crew ruled as not being a technical issue.
As the end of the night drew near, Yvette, Derek, Deniella and Phil made their way down to the eerie cellar. On this final vigil, the team experienced strange draughts coming from all around them and specific cold spots. With that, the night came to an end and the team gathered in the drawing room with David.
Of course Yvette was pleased with the activity they experienced, but the thing she was most pleased about was that she didn't encounter any of the resident bats.
For reviews of all of the new episodes, plus highlights and evidence from the shows, and to find out when Most Haunted is on next, visit the Most Haunted episode guide.