Despite being a skeptic, I found the psychic reading that west country medium Nikki Kitt gave me during her live show in Caldicot very emotional and uncannily accurate. 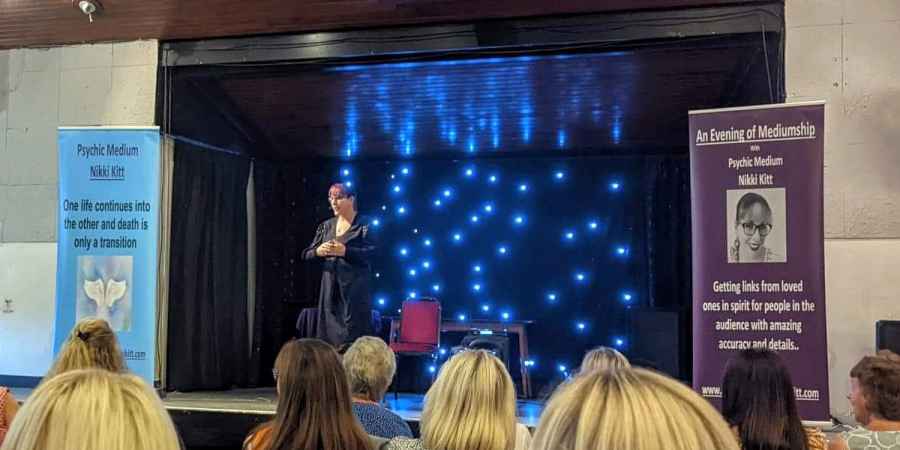 I recently attended an evening of mediumship, a live psychic stage show, hosted by medium Nikki Kitt at a small venue in South Wales.
Driving over the Severn Bridge on the way to the event, my girlfriend asked, "are you going to review the night?" I said, I probably would, and she replied, "you could just make it anonymous, don't mention her name."
This is because I am a bit of a skeptic, so any review I write about mediumship isn't likely to be hugely glowing or favourable. Anonymity is a good option, after all it is a little unfair to review something aimed at believers from my cynical standpoint.
However, I am going to identify by name Nikki Kitt, the Plymouth-based medium who promises her audience links to their loved ones with "amazing accuracy and details." The reason I have no qualms in sharing Nikki's name in this review is because actually, it's not going to be negative or unfairly skewed from a skeptic's perspective.
It would be unfair of me if I didn't honestly say that Nikki was very impressive. In fact, halfway through the first part of her show, Nikki picked me out of the audience and gave me what turned out to be a pretty accurate and emotional reading.

Arriving at the Severn View Club was like walking into a real-life manifestation of Peter Kay's Phoenix Club. It was tatty and run down, and had that dated social club feel about it, but actually there was quite a nice atmosphere there. A pretty good number of people had shown up in Caldicot to watch Nikki provide evidence of the afterlife.
There were about 70 to 80 people, which seemed pretty good for a small venue. The audience definitely had a very distinctive demographic, they were all very similar. All white women, middle-aged or older. In fact, I was amongst the youngest there, and I was one of just three men - one of the other men was a friend who had come with us.
We took a seat in the hall, watched over by Nikki, who was sat on stage with headphones on. Presumably she was trying to connect to the audience while listening to white noise or relaxing music. However, it's easy to understand why this could be perceived as suspicious. In fact my friend did. He whispered to me, "do you think she's got a microphone hidden somewhere?"
I thought it seemed unlikely, as the risk of getting caught wasn't worth it just to have a solitary microphone placed somewhere amongst the audience. At best this would only let her eavesdrop on the conversation of one group of guests. Even if they said anything useable, it's hardly much of an advantage. Plus, if that was what she was doing, she'd be better off hiding backstage listening in. From my skeptical standpoint, the more likely purpose for Nikki's need to oversee the audience as they arrived was simply to pick the people she was going to give readings to.
If this were the case, then it could explain how Nikki was so quickly drawn to an elderly audience member in a pink top right at the start of the show. Nikki got stuck in very quickly after a very short introduction and welcome. She was very likeable, she came across as warm and friendly. Speaking in her unmistakable west country accent, she told the first audience member that she was aware of a male spirit, a father figure, who'd had problems with his breathing. The audience member said, "no, that's not my dad." Nikki chuckled, "well, that's a good start."
I rolled my eyes and thought, "here we go again," as the painful memories of the last excruciating psychic stage show I went to in 2018 popped into my head. This particular medium, who I did keep anonymous in a review, seemed to find it as difficult to get an audience member to recognise the spirits she was communicating with as it would be to get Boris Johnson to admit that it wasn't a "work event" he was guzzling champagne at.
But then the energies seemed to align, or there was a shift in the ether or something. Nikki's connections with the dead became much more insightful. Nikki scored hit after hit with the elderly lady, resulting in an applause-winning reading. I have to admit, I was sat there feeling pretty impressed by Nikki's skills. In fact, I was so impressed by this great start that I wondered if it was too good to be true.
The thought crossed my mind that perhaps Nikki had planted an insider in the audience to give her show a good kick off. However, a quick glance around the venue with its broken ceiling tiles and faulty flickering stage lights told me this probably wasn't the case. Nikki, who was assisted on the night by her dad roaming around the audience with a handheld microphone, probably didn't have the budget to employ stooges.
My suspicions were further alleviated when Nikki's second reading was equally as accurate, giving rise to her second round of applause of the evening. Then, after a couple more accurate readings, I found myself taking the microphone from Nikki's dad as I became the subject of her next reading. Now there could be no doubt she wasn't using plants in the audience.

My Psychic Reading From Nikki Kitt

Straight away Nikki told me that she was aware of a male spirit around me. She didn't give any indication of an age or their relationship to me, but if anyone was going to come to visit me from the spirit world in Caldicot on a Wednesday night, then it would have been the person that Nikki went on to describe.
Her statements were spot on. He was the "life and soul of the party," a very sociable character, a generous man who looked after people and would talk to anyone. She correctly stated that he had a strong link to a pub, in fact the main photo used at his funeral was of him propping up the bar at his local, where he was a regular.
Nikki gave me two names in the reading, neither were the name of the spirit in question, but they were the names of two of my brothers. She correctly stated that I had recently had car troubles, that I had links to London and had recently made plans to visit Scotland.
I got a little bit overwhelmed when Nikki asked, "did he like cheese?" He did like cheese, a lot. He'd have slabs of it in his sandwiches and preferred a cheese roll to a gourmet meal. Nikki told me he was watching over me and had his hand on my shoulder.
It was so uncanny that I did start to tear up, not because I felt I was in the presence of his spirit, but more because it stirred up such accurate memories of the man I knew, who passed quite recently. I can see how an experience like this could be very comforting for the type of people, those middle-to-elderly-aged white women, who primarily frequent these sort of events.
Perhaps due to my emotional response - or as my friend suggested, my ability to hold a microphone and speak into it better than anyone else there - my reading seemed to get the biggest applause of the night. Which was fair as she got very few things wrong. My friend said afterwards, "I think she was very lucky with you."

Did Nikki Convince Me?

Nikki's show was good value for money and a fun evening out, but did she achieve what she'd set out to do?
A spiritualist medium's goal is to provide evidence of life after death. There's no doubt that Nikki impressed me, but did her evidence convince me? Well, I have to say, no it didn't. Nikki was very accurate, I'd go as far as saying the most accurate medium I've seen in this sort of setting, but there just wasn't enough proof for me.
As the emotions and excitement of the accurate reading she'd given me subsided during the drive home, I was brought back down to earth. Nikki had given a very detailed description of this particular loved-one. Other than an incorrect mention of cancer, everything she said had been completely accurate and very fitting.
However, it was what Nikki didn't say that revealed the holes in the reading. In life my ethereal visitor had been an electrician and made sure his workforce looked after his friends and family. Earlier that week my kitchen light had suddenly stopped working and the lads from his still-trading company came round to fix it. He would be so pleased that his men are still looking after us. Therefore there would be no way he wouldn't have mentioned this, especially as Nikki said several times during her show that the spirits want to prove they exist and will mention relevant things from the last week or two. My faulty light fixture was by far the single most relevant thing - although the flickering lights above the stage did seem to stop flashing while Nikki was talking to him.
But, the one key thing missing from the reading was a mention of my mum. There is no way that this spirit wouldn't have mentioned her or given me a message to pass on to her. If Nikki had been able to give my mum's name, the spirit's name, or perhaps the simple four-letter word "swan" as a link to his beloved local pub, then maybe I would have been a little more convinced.
Nikki continues to tour the South West throughout July and August, with dates including St Austell, Cardiff, Penzance, Weymouth and Exeter. You can find out more and get tickets on Nikki's official Facebook page or her website, psychicmediumnikkikitt.com.
For privacy reasons, some of the names and personal details included in this article have been changed, but over all it still presents a fair and accurate reflection of the readings given.
Tags:
psychicsparanormaltopical