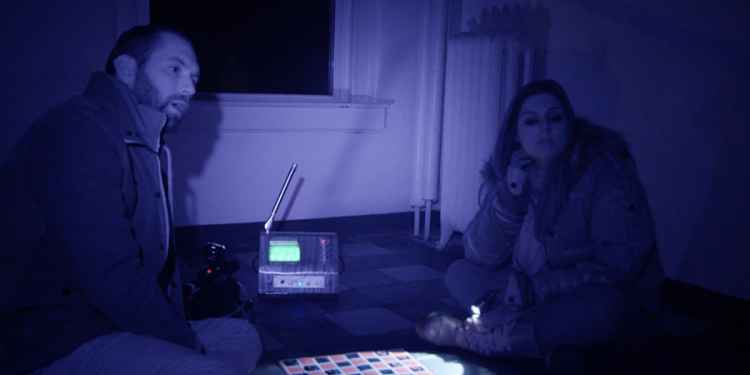 Here in the UK, the original season of Nick Groff and Katrina Weidman's ghost hunting series was billed as 'Paranormal Lockdown US', and British viewers have just been given another chance to see the whole season on the Really channel.
With the six episodes fresh in our mind, how much can you remember about Nick and Katrina's 72-hour lockdowns inside some of America's most haunted locations? Test your knowledge with these tricky trivia questions.

1. What was the name of the hotel in Kentucky where Nick and Katrina hunted the female ghost of a suicide victim?

2. Nick used a device to pump energy out into its surroundings that he hope the spirits could use, what was it called?

3. Which member of the team was seemingly bitten by an unseen force at Anderson Hotel?

4. Which member of the 'Ghost Hunters' team joined Nick and Katrina at Randolph County Infirmary?

5. Which sinister activity is said to have been carried out at Kreischer Mansion?

6. In which state would you find the Trans-Allegheny Lunatic Asylum that Nick and Katrina investigated in episode one?

7. What type of paranormal phenomenon were Nick and Katrina searching for at Randolph County Infirmary?

8. In which location did Rob Saffi capture a dark snake-list mist creeping across a wall behind Nick and Katrina on camera?

9. What is the name of the ghost hunting gadget that spews out words that Nick and Katrina used throughout the season?

10. What is the name of the rundown and unassuming house Nick and Katrina investigate in a rural community in Northwestern New York?


11. Amy Bruni and Adam Berry joined the investigation at Trans-Allegheny Lunatic Asylum, but which of these shows did they feature in?

12. In the forest surrounding Hinsdale House the investigators encountered something that forced them to go back inside the house, what was it?

13. In which state would you find the Randolph County Infirmary?

14. What is the name of the family that is said to haunt Franklin Castle?

15. Who was behind a murder that took place at Kreischer Mansion in 2005?

16. What game did Nick and Katrina attempt to play with the spirits of Franklin Castle?

17. What was the name of the psychic who joined the investigators at Kreischer Mansion?

18. Which of the investigators visited the Trans-Allegheny Lunatic Asylum as part of a previous ghost hunting show they were in?

19. In which part of New York would you find the Kreischer Mansion?

20. At Hinsdale House Nick and Katrina are joined by Tony Spera, but what is his area of expertise?