Paranormal Activity, Electrical Phenomenon, Ball Lightning, Or Something Else? 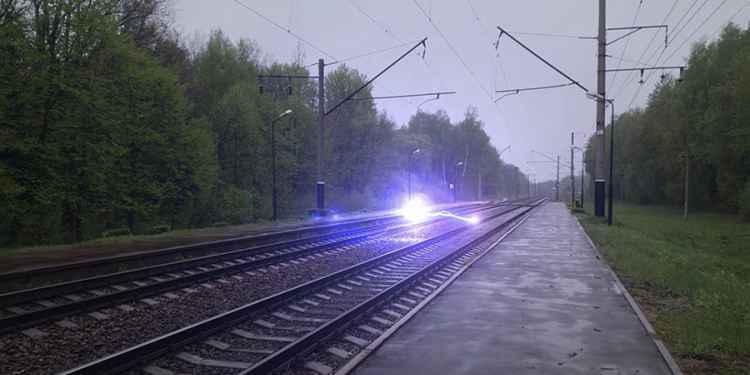 Photo: youtube.com
A video circulating online appears to show a strange ball of lightning passing over a railway track, but is it really lightning, an unexplained paranormal phenomenon, or something else?
The video of Russian-origin appears to show a glowing ball of electrical energy or plasma. This phenomenon is often called ball lightning and in the clip this unexplained and potentially dangerous atmospheric electrical phenomenon can be seen floating several centimetres above a railway line.
As it passes over the metal tracks electricity can be seen to arc to the tracks and the pylons of the overhead power lines. The occurrence only lasts a few seconds and the video ends with the blue spherical object moving away from the tracks towards the tree line.
If you're a member of any paranormal groups on Facebook, then you may have seen this video being shared over the last few days. Some that are sharing the clip are asking "who knows what this is?" Others are correctly identifying the phenomenon as looking like ball lightning and telling readers that this phenomenon has been mistaken for paranormal orbs and alien craft for centuries.
The comments left on the video vary. Some who've watched the clip think it's definitely a supernatural occurrence. "That's awesome paranormal activity," said one commenter. Another believer wrote, "paranormal activity feeds off energy, so it's most likely something walking and going into the forest".
Others were a little more rational. One skeptic commented, "it's just energy from the cables overhead, nothing paranormal in this at all." Another wrote, "that's pretty amazing! But I don't think it's paranormal, more likely ball lightning." A small number of people who'd seen the clip commented calling it an outright "fake".
But what's really going on in the clip? Well, the video was actually uploaded to YouTube in May 2019 with the title "Шаровая молния возле железнодорожных путей", which translates as "Sphere Lightning Caught On Video Near Railways". The description of the video, which has now had more than 30k views, reads "I walked through railways during a thunderstorm and accidentally heard some high-frequency noise. I turned around and saw a blue sphere floating above the embankment."
So, does this clip genuinely show sphere lightning, or ball lightning, as the video title claims?
No. This clip is nothing more than someone's CGI project. The creator of the video, Andrei Trukhonovets, was merely experimenting with producing digitally generated artefacts within a shaky video that resembles mobile phone footage.
Andrei shared the clip online and wrote the following about his work:
The goal was to simulate shooting on a mobile phone "as is", that is, with all its drawbacks - noise, artefacts, shaking, etc.
Difficulties were added that it is very difficult to find more or less acceptable videos with real ball lightning in nature, in addition, and their quality is very mediocre.
Therefore, it was difficult to achieve realism, because there's nothing to compare with.
Although the clip is meant to simulate ball lightning, Andrei admits that there was no real frame of reference to base it upon. This is because no verified video or photos of ball lightning exists due to its infrequency and unpredictability. Instead the animator used graphic effects from the 2019 video game 'Metro Exodus' as inspiration for the plasma ball.
Despite being very elusive, ball lightning is believed to be a real phenomenon, but because it is extremely rare and its appearance is impossible to predict, there's no widely accepted scientific explanation for the phenomenon.
Tags:
paranormaltopical

Is This The First Ever Colour Image Of A Ghost Caught On Camera?