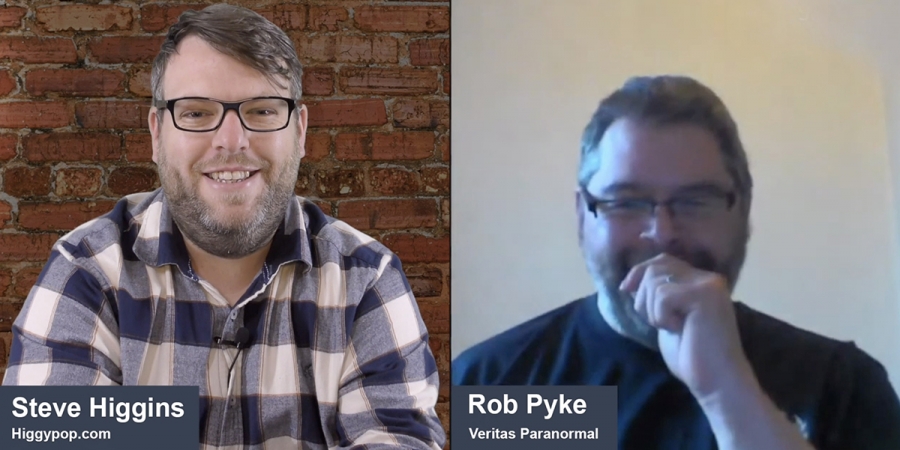 Rob Pyke has been awarded the most prestigious award in this year's Paranormal Entertainment Awards. Along with his wife Ann-Marie, Rob has raised thousands of pounds for charity through their strictly-not-for-profit events company, Veritas Paranormal.
Fans of the paranormal didn't get to vote in this category, but the winner was selected after careful consideration of the hundreds of nominations we received for the unrecognised member of the community who's worked the hardest to further the paranormal field this year.
The win was announced during this year's Paranormal Entertainment Awards, which were revealed during an online virtual event that was watched by thousands of fans of supernatural entertainment and ghost hunting. Rob was just one of a whole list of shows, paranormal teams and individuals who were honoured in the third annual event. You can see the full list of winners here.
Viewers of the online award show got to see the moment that Rob found out he was a winner when Higgypop's Steve Higgins gave him a call to reveal all.
Steve told Rob in the video call, "we're in the middle of the Paranormal Entertainment Awards right now, and we're up to the Unsung Hero category, and I thought you might be interested in this winner and it would be good to get your reaction."
Steve then rendered Rob speechless by telling him, "the guy who's won this category is a guy called Rob Pyke." Steve told a shocked Rob, "you were very heavily nominated throughout the whole nomination process, and of course this is for your charity work."
Rob's ghost hunting events company Veritas Paranormal, which was started last year, has raised thousands of pounds for good causes including Mind and the South Yorkshire Community Foundation.
Rob said, "I'm blown away." And then told viewers of the virtual online awards show, "I can't believe, even going through lockdown, how much our members have come forward to donate, put their hands in their pockets and help out."
Rob admitted that he was chocked after being nominated for what he says is the easy part, "the fact of the matter is that I organise these events and people put their hands in their pockets, as far as I'm concerned they're the ones that are giving to charity, I'm doing the easy bit by organising the events. And it just blows me away."
Rob added, "it's not just a one-man-band this. I couldn't do what I do without the support from Anne-Marie, my wife, who I love dearly, and I'm so fortunate that she enjoys the paranormal passion as much as me. So any nomination for me, is two-fold."
Stars of 'Are You Haunted...?' Phil and Sara Whyman congratulated Rob in a video message. Sara told the winner, "we couldn't honestly think of anybody that was more deserving of this award than you."
Paul Stevenson from Haunted Magazine also popped up during the award show to tell Rob that his win was "fully deserved." Paul said, "charity events are quite big in the paranormal world, more so than ever to be fair, and charities need our money, more so than ever before."
You can find out more about the work Veritas Paranormal do through their events on their official website, veritasparanormaluk.com or follow Veritas on Facebook to keep up to date with future events.
You can find out more about the 2020 Paranormal Entertainment Awards and see the full list of winners here.