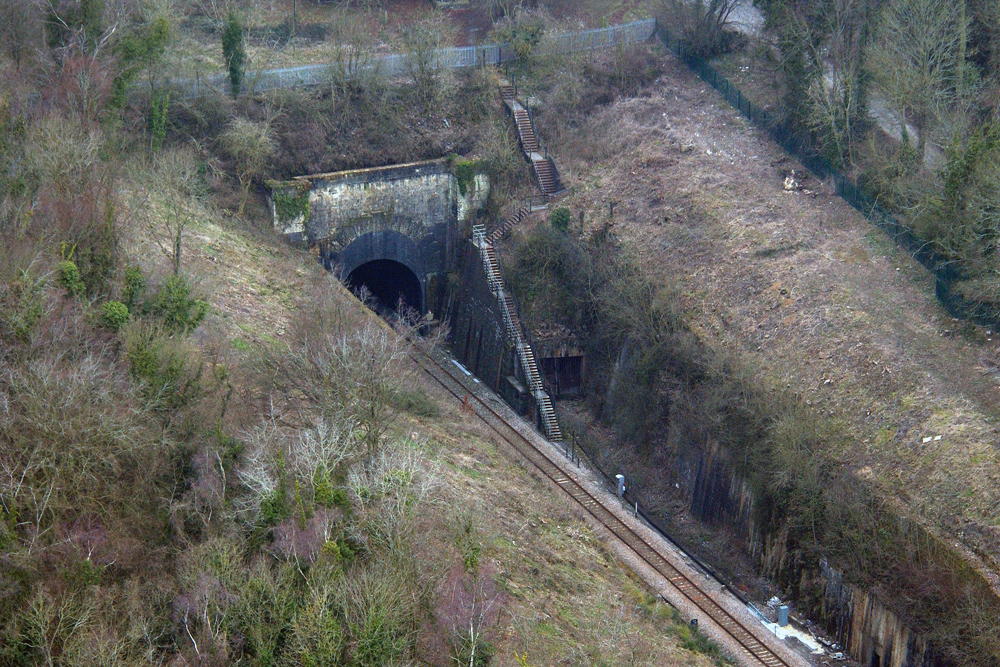 Photo: © Crown Copyright
From the air above Wiltshire, it's easy to see Brunel's Box Tunnel disappearing underground near Corsham, but the railway isn't the only thing that's under the tranquil scene. Below these glorious fields there are almost 4,000 acres of subterranean chambers and tunnels.
There's a whole underground landscape, with its own unique history. It's a hidden world, that's dramatically re-shaped the towns and villages on the surface.
The story starts with Wiltshire's underground golden treasure, Bath stone. The village of Westwood is just one in the area that sits on top of an abandoned Bath stone quarry. For hundreds of years the beautiful golden stone has been used to build all the famous buildings around the world, it's what gives the city of Bath its characteristic look. Even parts of Buckingham Palace were dug out by hand from vast underground quarries. 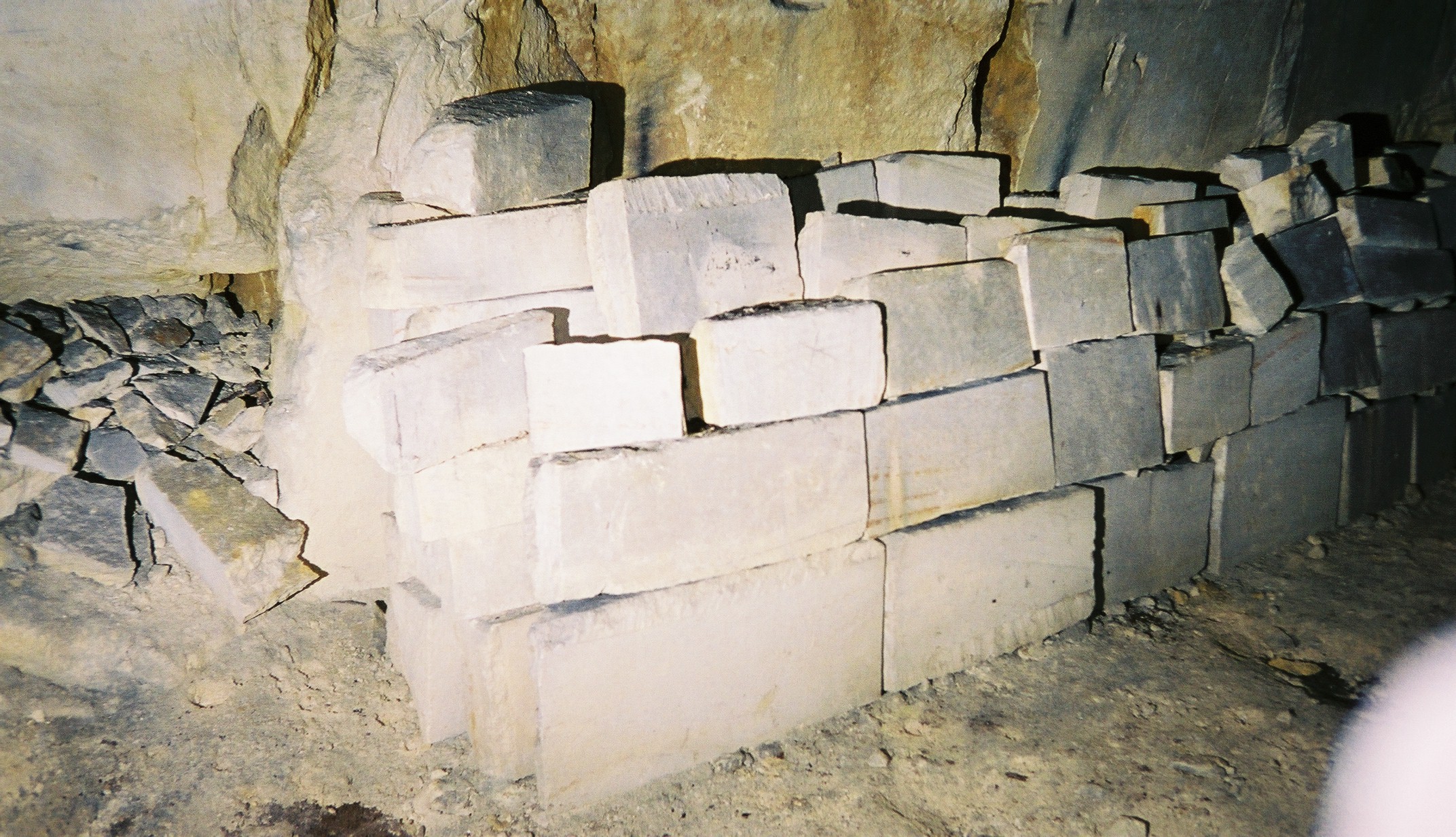 Before modern mechanisation, and even steam power, quarrymen in the area were able to extract huge blocks of stone from the ground. Just cutting the stone into manageable chunks was a feat in itself. The process started by cutting a horizontal slot all the way across the working face at ceiling level, going back into the wall. This slot would be picked by hand and would allow the quarryman to insert a large saw. He'd then make a vertical cut from ceiling right down to the floor of quarry floor. It would take about an hour to cut through each foot of stone, meaning this vertical cut was a full day's work for one of the quarrymen. The men then drive chips and wedges into the stone face in order to break the stone from the back wall.
Although the work was long and arduous, Bath stone is relatively easy to work with underground as it is relatively soft and crumbly, but once taking to the surface, it dries out and seasons, it becomes lighter in colour and gets much stronger. Bath stone is a freestone, which means it's very expensive, but it's free working, which means you can cut it in any angle and it won't split like slate, which is the other extreme. 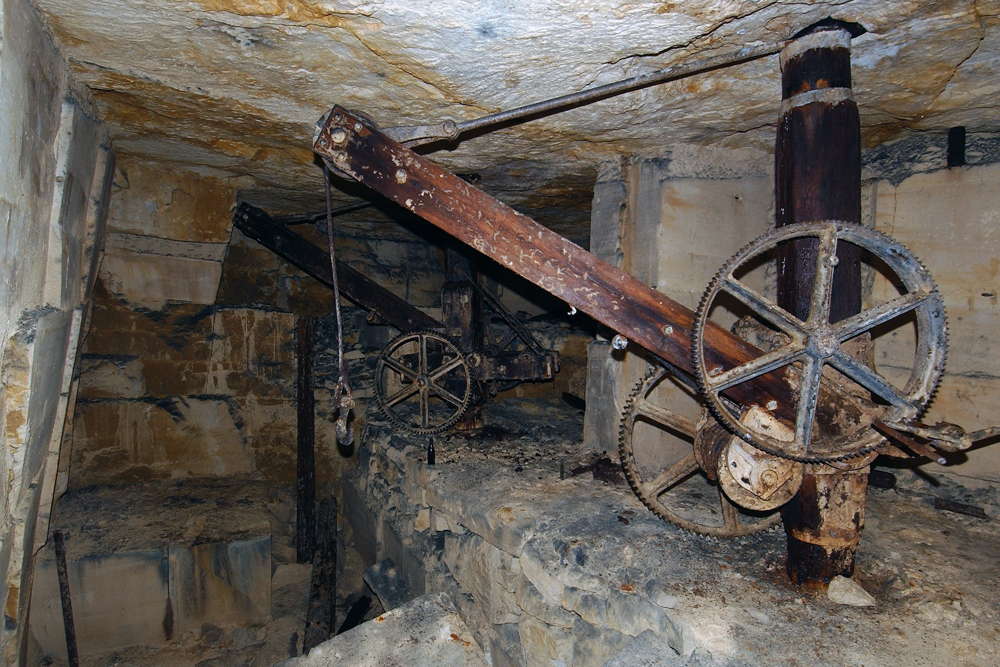 Photo: © Crown Copyright
Once cut, the stone was moved around using a quarrying crane, the one still surviving in Westwood Quarry was built in 1890. The crane could handle any size of block, up to about five tons. The crane could be collapsed and moved around the underground working as needed, it was simply fitted into a chug hole in the ceiling at the new location.
A new lease life for the quarries came in 27th November, 1940 when they were requisitioned by the war cabinet. All the workmen were given an hour's notice to move out of the quarries, which were taken over by the government. It was such short notice that the men left all their tools and many of their personal possessions behind.
The Wiltshire's quarrymen, these quarries were just the spaces left behind after taking out the valuable stone, but to a 1930s government preparing for war it was the spaces that were valuable. They were ready-made, secret, bomb-proof shelters. The sudden requisitioning and conversion of Wiltshire's quarries dramatically changed things underground, but on the surface, the tiny villages were to see even greater change.
At this time Corsham had no services like electricity, gas or mains water until the government moved in. In fact even a large sewage works in the area, which now serves a large area of North Wiltshire, was built by the War Office to cope with the influx of population when the government quarries were established.
The majority of Wiltshire's underground quarries were converted into vast ammunition stores, some became underground factories, and one quarry near Corsham was used as an underground control centre by RAF Fighter Command. Tens of thousands of people were moved into the area to convert the quarries and then to work in them.
Corsham was just a tiny village with a population of only about 500 people before the war, but then in the late-1930s there was an influx of around 7,000 men to work in the underground ammunition depots, and this was followed up in the early-1940s by 25,000 workers for the underground factories, plus their families. This would have taken the population of Corsham to somewhere in the region of 50,000 in the space of a few years. 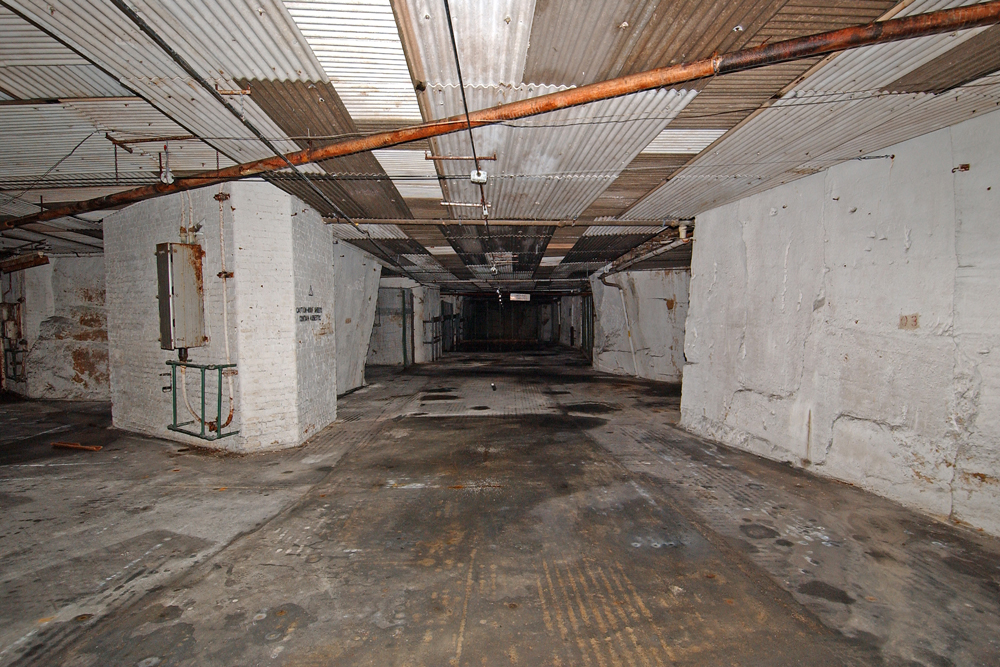 Photo: © Crown Copyright
In 1940 the Bristol Aeroplane Company moved major production from Filton in Bristol into a state-of-the-art underground factory in Spring Quarry. They built military aircraft engines underneath the village from 1942 to 1946. The Spring Quarry factory was the largest underground factory in the world, spread over roughly 70 acres.
The landscape is today scarred with heavily-reinforced concrete buildings which mark the top of lift shafts and pedestrian entrances, some had to cope with as many 25,000 workers entering and exiting the site each day.
The underground factory closed in 1945, but because it had cost the government so much to build, something in the region of £30 million, the government felt they needed to find some sort of use for it after the war. The majority of it was taken over by the Cabinet Office, then millions more was spent in the late-1950s/early-1960s to turn it into the Emergency Government War Headquarters. This is where central government would have gone had there been a nuclear war. 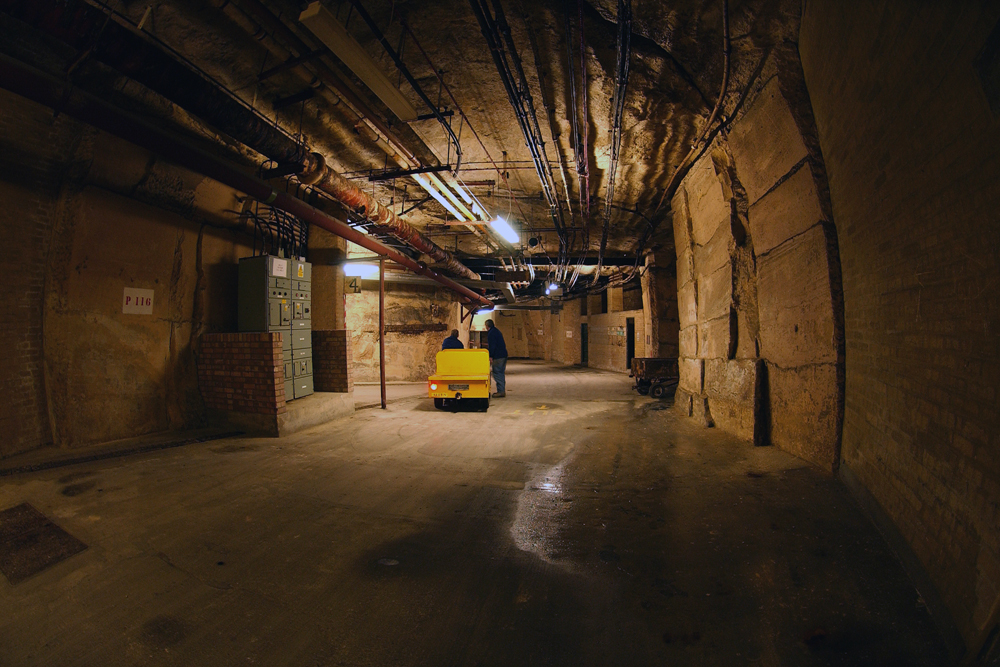 Photo: © Crown Copyright
Even this site has now become surplus to requirement and was mothballed in 1992, but because so much money was spent on it, they hold on to it just in case. However, it's just sat there for more the 25 years, gradually decaying. 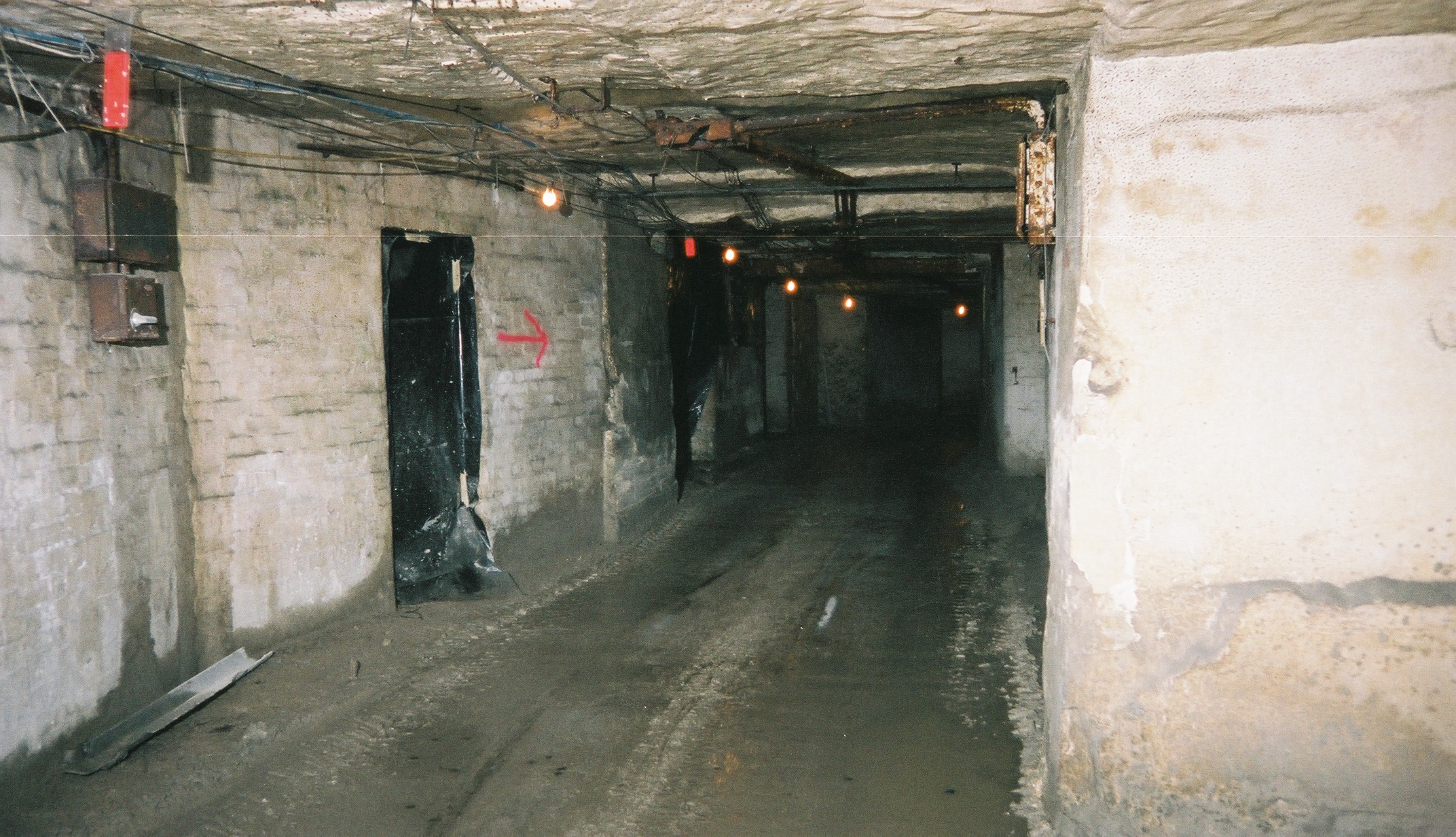 A few miles away along side the River Avon near Bradford-on-Avon, is the village of Westwood. Just like in Corsham, the former underground stone quarries here were put to alternative uses during the war. During World War II most of the Bath stone quarries were used as gigantic ammunition stores, but Westwood were different and rather special. A big chunk of Westwood Quarry was used to store some of the nation's most valuable a precious art treasures and then in 1941 another big part of the quarrying was handed over to the Royal Enfield Company from Redditch for use as a precision engineering factory.
Hundreds of men and women came from all over the country to work Royal Enfield in Westwood. One former employee, Lily Mead said that working underground didn't phase her, "I think we realised that we were in a better position than some, because we were underground, whereas in a town when there could be bombing any time of night and day, we felt much safer obviously."
Her colleague, Edna Wainright added, "we never thought about safety for a minute, you just carried on as if you were working in a factory above."
Underground at Westwood, Royal Enfield made predictors, detectors for anti-aircraft guns and then tested them on the surface in the quarry yard. Lily and Edna were trained as precision engineers, but were unaware of the importance of their work. Edna explained, "it was top secret, we didn't know what we were making really."
During the war, Royal Enfield's underground staff worked long hours, but were treated very well. Edna remembers, "they used to have a doctor come in once a week, the nurse was always there on duty." There was even a sun ray room where workers received ultraviolet sun ray treatment in a specially prepared underground room, something which was well ahead of its time.
The room was provided for the staff who were working underground on 12 hour shifts and never saw natural sunlight, especially in the winter months. Two went in at a time and had to wear dark glasses and had two minutes of treatment once a week.
Another former worker, David Brierley, remembers his time in the factory, "there was a certain atmosphere down here, which was not replicated in any other company I worked for and I suppose it was simply because we were all in the same boat, and if the lights went out, we were all in the dark."
Royal Enfield continued working in Westwood after the war, but today the factory is silent and it's hard to imagine it was ever a full-blown factory that produced high-precision parts for the war effort and later for motorcycles. The company finally moved out in 1970, but other parts of the old quarry are still working. Westwood is one of only three Wiltshire quarries where Bath stone is still cut out, bringing out story back to its starting point.
Tags:
urbexundergroundwiltshire