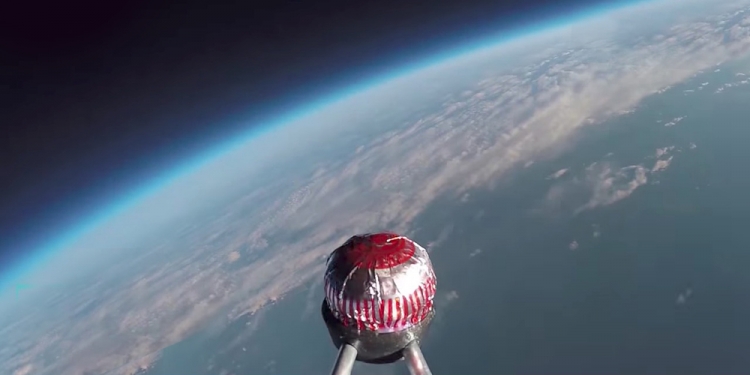 The underrated delight which is the Tunnocks teacake, is already the undisputed king of confectionary as far as I'm concerned. Now, finally, the traditional British snack has not only proven itself to be superior, but has also proved that the Earth is indeed round.
The family run biscuit company was founded in Scotland in 1890, almost 70 years before the Flat Earth Society, and amazingly both are still going strong even today.
Which is why a team from the Glasgow Science Centre launched a teacake, which they had affectionately named "Terry", into space on board a weather balloon. The aim was to spark people's scientific imaginations, which hopefully would also wake them up to the fact the world is round.
Terry the teacake embarked on a two hour flight from Houston, in Scotland and reach a height of 37,000 meters. That's about three times the altitude of a commercial plane.
The voyage was streamed live on Facebook and was watched by over 33k people. Terry eventually touched down relatively intact in Galloway Forest Park.
The balloon and its chocolate passenger was more than heigh enough to see the curvature of the Earth. The curve can be hard to spot from an aeroplane at a cruising height of around 10k metres, unless you have a wide field of view, like in the cockpit.
So at almost 40k meters, Terry's an obstructed view of the horizon clearly shows that the Earth is indeed, irrefutably round, just like a teacake.

Watch The Teacake Get Launched Into Space