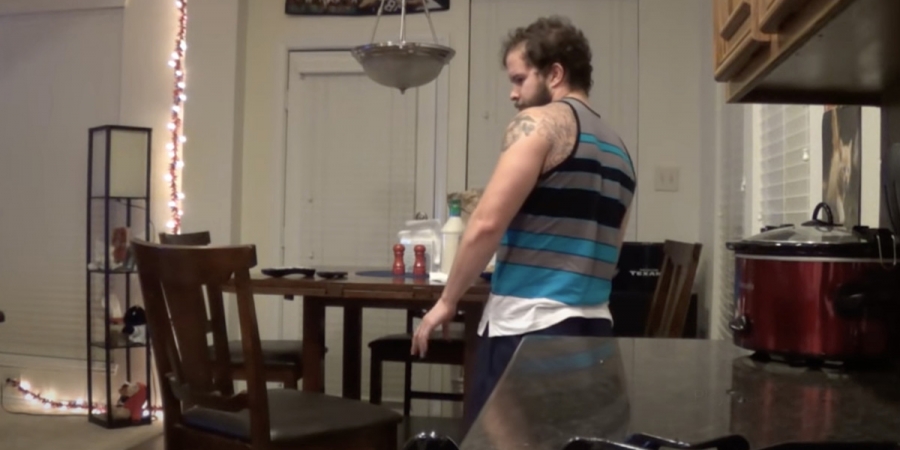 The second series of Really's 'Unexplained: Caught On Camera' comes to an end with another hour of strange and unexplainable phenomenon caught on camera by members of the public, all of which will be watched by the regular panel of experts, who will give their opinions on the inexplicable clips.
Coming together to form the panel for this week's episode are Jayne Harris, Ciarán O'Keeffe, Barri Ghai and Deborah Davies. But they've got their work cut out as all around the world, more and more people are capturing the unexplainable on their mobile phones and CCTV.
As always, in the eighth episode we heard firsthand from the people involved. This week, we meet the victim of a haunting in his US home, a British escape room giving players more than the expected, and in Florida a pair of ghost hunters make contact with spirits through a disturbing doll.

A Haunting In Houston

First we meet a Texan YouTuber named Corey Davison. He and his mum believe that their home is haunted. It all started with a clip that dates back to 2014 and appeared to show a chair moving seemingly on its own in Corey's kitchen.
This was followed a few days later in another video by a falling clock and from here the activity continues and Corey caught all of it on camera. Eventually he even managed to catch a ghostly figure walking through his home on a CCTV camera.
Jayne said, "from what we've seen Corey seems to be living with quite an active poltergeist." Barri agrees and speculates that Corey's house could be "built on a burial ground, there might well have been a spirit that resides in the property ever since they bought it."
Ciarán says "when you see stuff like the chair moving of its own accord, that is almost like the holy grail of hauntings and you just rarely see that captured so brilliantly."

A paranormal-themed escape room in Stoke-on-Trent became home to a poltergeist haunting after opening their new ghostly game, Entity. The owners of Paralysis escape rooms were warned that the building was haunted by a woman seen on the stairs and poltergeist activity when they took over the building, but things got darker when guests started using a Ouija board in the new room.
Unfortunately their first bit of evidence was orbs, which were caught on a CCTV camera in what looked like a draughty area near an external door - the perfect conditions for dust caught in airflow that creates orbs when caught on a night vision security camera.

A common cause of orbs are tiny particles in the air which are invisible to the human eye in the darkness, but when illuminated by a night vision camera's infrared light source they appear to glow. Because they are passing close to the camera's lens they will appear much bigger and out of focus, like a glowing sphere. These particles can be anything from dust, water vapour, rain, snow, or even insects.
However, the activity at the escape room increased and they eventually caught objects moving on their own on camera.
The owners of the attraction believe the Ouija board has opened a portal. Expert, Jayne, thinks this might be possible. She said "I think because they're a communication tool with the spirit world, they're almost welcoming in a haunting if you like. So, they can cause things to happen. It's one of those things where once you open the door or once you open the gateway, you can't necessarily close it."
Barri, "people shouldn't mess with the dark arts, in my opinion Ouija boards can be dangerous if they're not used properly."

Next we're back with YouTubers Clayton Golda and Heather Smith who we first met back in episode one of the series. This time the pair are carrying out a creepy investigation at a disused former jail built in the late-1800s. The jail is said to be haunted by the prisoners who died there.

The duo start with the caretaker's living quarters where they encountered a creepy raggedy Ann doll which they decided to use as part of their investigation with a spirit box. As they asked questions through the device they started hearing a child's voice responding and moments later the doll fell off the bed.

Barri said, "spirits can most definitely attach themselves to dolls. Dolls can be used as conduits by spirits to come through and communicate with the living."

A spirit box is a device that rapidly scans through the AM, MW and FM radio spectrum, as it does the sounds of white noise and fleeting snippets of radio broadcasts can be heard. It's believed that spirits are able to change or influence these bursts of audio in order to form sounds, words or even sentences.
However skeptics dispute these voices since the device will almost certainly hear fragments of speech and music from radio stations. To overcome this, some paranormal researchers put their spirit box inside a small bag which acts as a Faraday cage, this filters out all of the electromagnetic spectrum, which means that radio broadcasts don't make it to the device. In this case it is more likely that any voice which is heard is a result of paranormal contact.
There's no understanding or even theory to explain how human spirits are able to manipulate radio waves to produce sounds after death. However, despite its flaws, many teams are able to obtain seemingly intelligent responses to their questions using this sort of device.
'Unexplained: Caught On Camera' continues next week on Really as part of the channel's #Freakend event, bringing viewers three nights of paranormal entertainment every Thursday, Friday and Saturday.
You can watch in the United Kingdom and Ireland as part of the Discovery family of channels. You can watch Really on Freeview (17), Sky (142), Virgin Media (129) and Freesat (160), plus YouView, BT TV and TalkTalk TV. Or watch previous episodes on demand on Discovery+.